Water safety experts are urging beachgoers to stick to patrolled beaches, carry a flotation device and call triple zero if something goes wrong after an unusual spike in the number of parents drowning trying to save children.

More often than not in these situations, the person attempting the rescue fatally drowns while the rescuee survives, she said.

That was the case with a father of nine, Steven Mote, 41. He fatally drowned on a Wollongong beach in November attempting to rescue his son and some cousins who had been caught in a rip. The children survived.

In another incident, two 37-year-old friends Denny Jade Caballa and Richard Catbagan fatally drowned trying to save Mr Caballa's nine-year-old son who had been caught in rough surf at Queensland's Teewah Beach. A friend of Mr Caballa said he "tragically passed away while heroically trying to save his child".

Dr Lawes said it was tragic to have already reached the annual average number of bystander deaths when we are not even halfway through the financial year. Experts predict the figure will continue to get worse by the end of summer.

A review of coastal fatalities found 67 Australians drowned attempting to rescue others since 2004. Of these, 84 per cent occurred while the rescuer was attempting to save their own child, a relative or a friend, usually under 18 years of age. Male rescuers accounted for 81 per cent of deaths, and a third were aged 30 to 44 years of age.

Dr Lawes said 97 per cent of the victims attempted the rescue without a flotation device. "[That's] pretty powerful evidence of the importance of always taking a flotation device if you find yourself in a bystander rescue situation," she said. 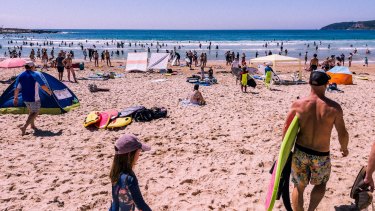 Experts fear COVID may be pushing people towards unpatrolled beaches because they are less crowded. Credit: James Brickwood

Very few of those who died had any training water safety. In contrast, an earlier study of successful rescues found many had training and carried a flotation device.

Because bystander drownings often involved family and friends, these rescues were highly emotive situations. "Anyone in a rescue situation is stressed and not thinking rationally," said Dr Lawes. "These situations are even more emotional when they involve a family member."

Urging families to avoid attempting a rescue, Dr Lawes said the most important thing was to stop and think, assess the situation, and call triple zero. 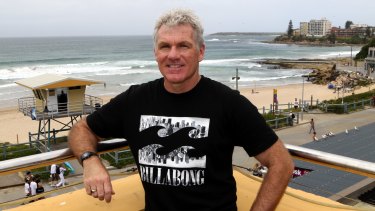 The research found that in eight out of 10 cases, the rescues were carried out at beaches more than a kilometre from the nearest lifesaving club (either at an unpatrolled beach or outside the flags).

Like those this year, 73 per cent were rip related, according to the research paper Dying to Help by Dr Lawes with Eveline Rijkesn, University of NSW's Professor Rob Brander and other water safety experts. It was published in PLOS ONE in September.

It should also focus on the importance of flotation devices when enacting a rescue and further educating visitors about the rip current hazard.

These can include a life jacket, a boogie board, an Esky, or an empty water bottle or two on a rope.

Beach safety was a growing field internationally and the goal of the new research group was to advance beach safety science by fostering evidence-based research.

This included research on why people chose to visit unpatrolled beaches and research into drowning deaths of people from non-English speaking backgrounds. 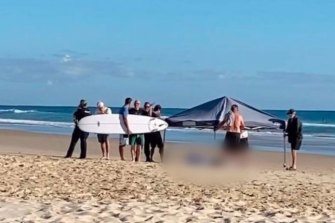 Mick Barry died after being caught in a rip.Credit:Nine News

The bystander study by Dr Lawes, also a member of the new research group, found that many men overestimate their swimming skills, especially in coastal waters.

Dr Lawes and Professor Brander also warned against the growing use of human chains of bystander rescuers because they put more people at risk. A 53-year-old American woman, Karen Graham of Tennessee, drowned in September when a human chain of 20 people collapsed. They were trying to reach a person caught in a rip.

"This horrifies me," said Dr Brander. "They get a lot of attention but they are extremely dangerous and put others at risk," he said.

Water safety experts also fear that COVID-19 is encouraging beachgoers to seek out uncrowded and unpatrolled beaches to avoid other people carrying the disease. "I am expecting a horrific drowning toll for these reasons," said Professor Brander.