Alternative medicine devotees and people shunning certain vaccine brands in suburbs such as Brunswick, Collingwood and St Kilda could be driving down vaccination rates in Melbourne’s inner-city.

The five Victorian local government areas with the lowest first dose vaccination rates are Melbourne (68.3), Yarra (72.5), Darebin (73.5), Port Phillip (74.5) and Moreland (75.2), according to data released by the federal government this week. 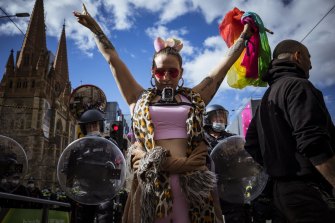 The anti-vaccination movement draws people from a wide range of backgrounds.Credit:Chris Hopkins

“In the inner-north, in Fitzroy and Carlton, and [other hotspots] … there are clusters of people who have an alternative belief system or are into alternative therapies, which may mean they have a very different approach to vaccination than the general population,” he said.

“They [also] may be very picky with what [vaccine] they want [and] lulled into a false sense of security, saying … ‘I’m fairly safe, I don’t need to get this vaccine right here, right now’.”

The focus of authorities has been targeting lower socioeconomic areas in Melbourne’s outer suburbs.

Deakin University epidemiologist Catherine Bennett said while they were small in overall numbers, anti-vaccine or hesitant people often lived in similar geographic areas and tended to be city-based.

“They’re often males who work in a science related area, not health, but data or engineering. Then, you have a lot of women, and a few males, who [are into] natural therapies or wellbeing, as a professional career … the people [who] are actually saying ‘we should rely on our immune systems’,” she said.

“Sometimes, education works in a strange way because people understand it enough to rely on other people to do the heavy lifting,” she said.

“We know Brunswick was the site of a measles outbreak a few years ago, so if we’re seeing now that that’s a lower uptake rate of COVID-19 vaccination that doesn’t surprise me.”

Dr Attwell said families from wealthier backgrounds that often refused or delayed vaccines for their children were hard to motivate with incentives or “no jab, no play” penalties as they could afford alternative care and didn’t need government payments.

Data from the National Health Performance Authority in 2015 showed some of Melbourne’s wealthiest suburbs had the lowest immunisation rates in the state, including South Yarra, Prahran and St Kilda, which each now have low COVID-19 uptake.

Yarra councillor Stephen Jolly said low vaccination rates in his municipality could not be blamed on poor people and migrants as it was overwhelmingly wealthy and educated compared to outer regions.

“City of Melbourne is last, Yarra is second last and other leftie, greenie, progressive heartlands of the professional middle class are near the bottom too,” he said.

“My theory is we have a relatively large cohort of Byron Bay-type lifestylists into alternate medicine who think they know better than the health professionals.

“They go to the gym every day, they have their decaf almond latte every morning, and they think they’re immune.”

Inner-city mayors defended their low vaccination rates, arguing that it was due to young populations.

“Three-quarters of our residents are under 40. That means they only became eligible for Pfizer in August,” Melbourne lord mayor Sally Capp said.

Melbourne is the youngest municipality in the state, while Yarra is seventh, Moreland is 10th, Darebin is 15th and Port Phillip is 16th.

However, Yarra Council officer Lucas Gosling told Tuesday night’s meeting that its seven-day uptake range was the lowest in the state.

“Young people, generally across the Victorian community, are taking up the vaccinations in record numbers.”

The Victorian government released vaccine data on Tuesday that drilled down to postcodes. It showed Collingwood and Abbotsford, where 60-65 per cent of residents had received their first vaccine dose, as the worst areas in Yarra.

Cr Capp said the 2019 data was skewed due to the high numbers of international students who had left Melbourne since the start of the pandemic.

Demographer Glenn Capuano, from research firm Informed Decisions, said this was probably true and that Victoria’s total population had fallen by 43,000, with much of it coming from the inner-city.

In Moreland, where Brunswick (60 to 65 per cent) and Fawkner (55-60 per cent) had the lowest first-dose rates, mayor Annalivia Carli Hannan blamed access and language barriers.

“It is clear that there is some vaccine hesitancy among a minority in Victoria, but no evidence to show this is stronger in Moreland than other municipalities,” she said.

Low first-dose rates are centred in St Kilda, St Kilda West, St Kilda East and Windsor (each with 60-65 per cent) in Port Phillip.

Mayor Louise Crawford said the council hadn’t researched why, but welcomed St Kilda being included as one of 27 suburbs to be targeted by the state government’s vaccination new blitz.

All mayors who spoke to The Age said their councils had initiatives, such as forums, targeted communications campaigns and pop-up vaccination clinics, to encourage vaccination.