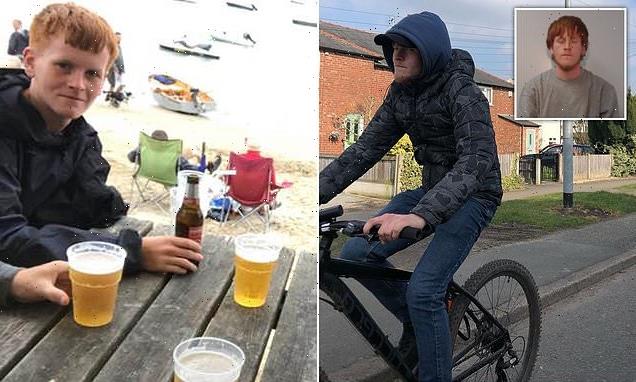 Builder, 20, who groped 20 women or girls as young as 14 over eight days by riding up behind them on his bicycle is jailed for more than a year

Joshua Etchells cycled behind his victims on his mountain bike to get to and from work, then grabbed or slapped their backsides as he went past before pedaling off at speed.

Etchells, from Sale, Greater Manchester, targeted all the females over the space of eight days in March, while they were on canal tow paths or cycle paths on the Bridgewater Canal, the Trans Pennine Trail and along the River Mersey in various locations around south Manchester and Cheshire.

He pleaded guilty last month to 20 counts of sexual assault and on Friday was jailed for 14 months at Minshull Street Crown Court in Manchester. 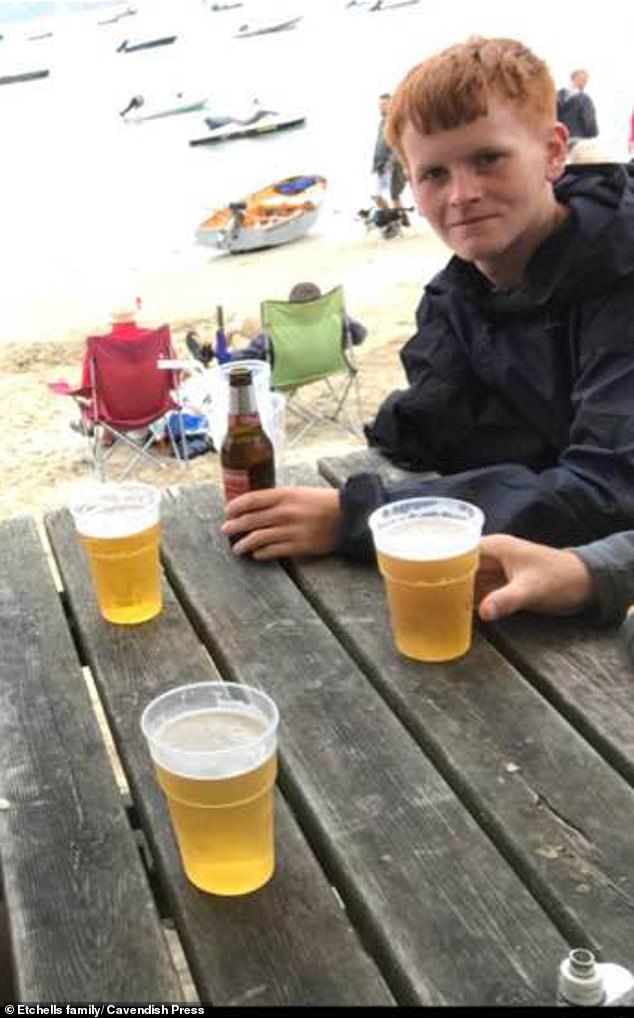 Joshua Etchells cycled behind his victims on his mountain bike to get to and from work, then grabbed or slapped their backsides as he went past before pedaling off at speed

Greater Manchester Police (GMP) launched Operation Carbon, a dedicated investigation, such was the local concern over the attacks, beginning on March 1 this year.

One of the victims snapped a picture of Etchells after her mother drove her around the area looking for him after she came home in tears.

The image was used by police to identify Etchells who wore a hoodie over his head and was usually under the influence of cannabis when he would strike.

In one single day he claimed nine victims as he rode passed them – despite reading on Facebook of vigilantes vowing to push the culprit into the canal when details of the assaults were posted on social media.

During the week long terror campaign, many of the women were earing earphones and it is feared Etchells targeted them in the belief they would not hear him as he crept up behind them.

He was arrested after one victim trawled the streets in the immediate aftermath of the assault and got a picture of him as he was cruising around on his mountain bike.

At Minshull Street Crown Court, Manchester, Etchells, now 20, who lives with his mother and three siblings in a £450,000 house in Sale admitted sexual assault and was locked up for 14 months.

He listened in the dock as many of his victims who had been exercising to cope with the UK lockdown gave emotion charged statements detailing the torment they suffered following the attacks.

One woman aged 37, said: ‘There was nothing funny or frivolous about what he did.

‘Women everywhere live in fear everyday of sexual violence and he probably thought what he did was insignificant, but he needs to know his actions contribute to a culture where women don’t feel safe.’ 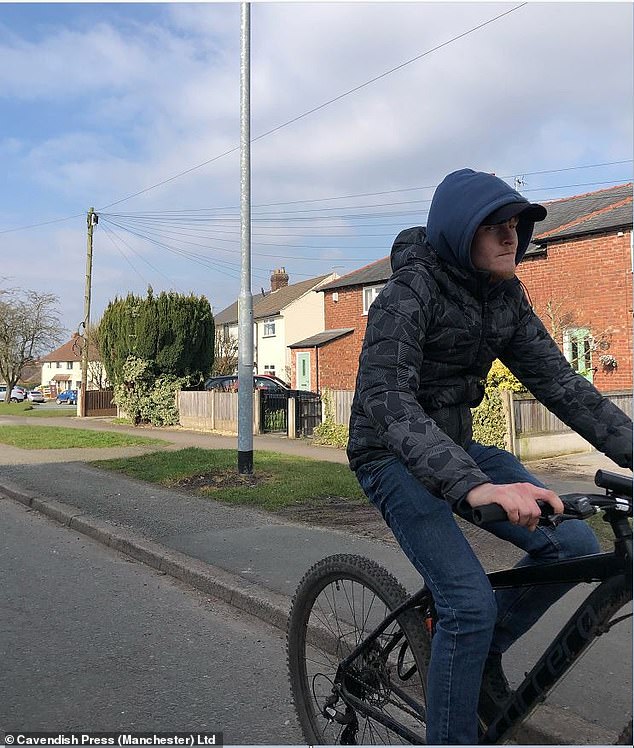 This image, taken by a victim, was used by police to identify Etchells who wore a hoodie over his head and was usually under the influence of cannabis when he would strike

Another victim aged 45, said: ‘I am a regular runner and often run alone and now I am very aware of people around me. I live close to the canal and my children have often walked around there, but I can no longer feel safe in the place that we live.

‘I can still feel the anxiety as I turned over my shoulder to see what seemed like masked figure up so close to my side and then the massive ‘whack’ as I was hit.

‘This feeling has never left me. It took me a very long time to run along that stretch of the canal again, alone, always avoiding and running around another way.

A third victim, 42, a mother of two told the court: ‘I have never again been able to relax while running in my local area, the neighbourhood that, before this incident I could walk and run around, as a way of switching off from my work and daily stresses.

‘Now, I am always wary, fearful and always frightened of others and constantly looking over my shoulder when walking or running. I’m particularly scared of cyclists approaching from behind.

‘Many times, I have jumped in shock and fear when someone has been approaching from behind. My hobby is running and now I do not know if I am ever going to be able to enjoy a run without thinking that someone could potentially attack me.’

The 14-year old victim was walking home from the canal and was just yards from home when Etchells grabbed her buttocks as he rode past.

She was said to be ‘shocked, confused, scared and disgusted’ but later urged her horrified mother not to bother calling police saying: ‘That’s just what boys do’.

Etchells declined to comment in police interview but his phone was seized and cell site and GPS data was consistent with him been in the area at the time of each assault. 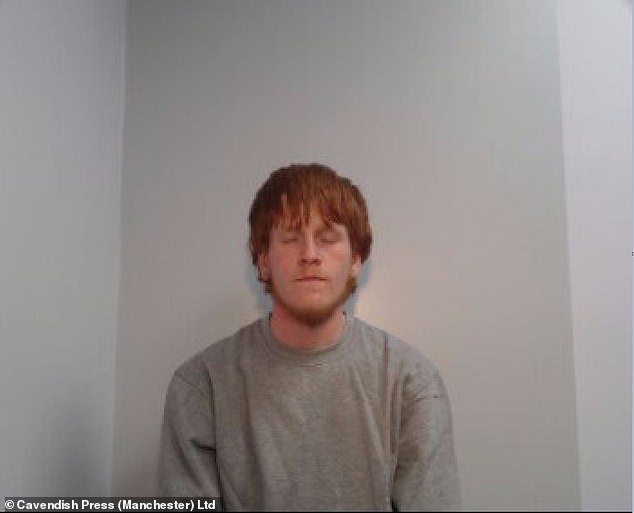 In mitigation defence counsel Amanda Johnson said Etchells’ parents had split up in 2019 and he had been smoking cannabis to cope with his father’s mental health issues.

Howard Gough, senior district crown prosecutor for the North West Rape and Serious Sexual Offences Unit of the CPS, said: ‘Every woman should feel free and safe to go about their daily business, including exercising or walking alone, without fear of being sexually assaulted.

‘Joshua Etchells carried out a series of sexual offences during daytime hours whilst he was on his way to and from work and as he cycled around the area at weekends.

‘Some of his victims were jogging or walking alone, others were with a friend.

‘He initially denied being responsible for the sexual assaults, but we worked closely with the police to build a strong case against him.

‘When faced with the overwhelming evidence, including extensive CCTV, telephone and cell site evidence, he was left with no other option than to accept responsibility and pleaded guilty at a hearing last month.

‘He left behind a trail of physical pain, shock, distress, and fear.

‘Some of his victims are still suffering the psychological impact of what he did to them.

‘I would like to thank every one of his victims for reporting their assaults to the police which has assisted us in bringing this sexual predator to justice.’