A $1 million reward is being offered for new information that could help police solve the cold-case murder of a couple north-east of Melbourne more than three decades ago.

Well-known criminal identity Michael Schievella, 44, and his partner Heather McDonald, 36, were killed in their St Andrews home on September 16, 1990, while Ms McDonald’s two young children were in the house. 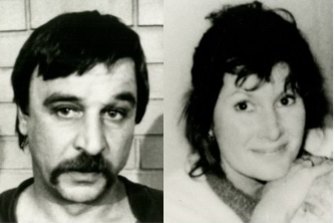 Michael Schievella, 44, and Heather McDonald, 36, were killed in their St Andrews home.

The children found the bodies of the couple before raising the alarm.

Police believe Mr Schievella was at the St Andrews hotel on the night of September 16, 1990, and got into an argument with someone at the venue and are seeking to speak to anyone who might know what the argument was about.

The Director of Public Prosecutions will also consider granting indemnification from prosecution to anyone who provides information that identifies the principal offender, or offenders, in the killing, which police believe was a targeted hit.

Police believe that about 8am the morning the couple was killed, Ms McDonald’s young son woke up and went to the lounge area of the house to watch TV, where he found Mr Schievella speaking to a man wearing a balaclava.

The man, who remains unknown to police, took the boy to his bedroom, tied his hands, left him on the floor, closing the door behind him. The boy said he then heard male voices, including that of Mr Schievella, coming from another bedroom.

The boy said he heard a man ask “have you got any money on you?” and “where have you hidden your money?“. Mr Schievella replied he didn’t have any.

“It was described by investigators at the time as a ‘brutal, callous and cowardly attack’ and our current investigators would completely agree with that.”

The boy, still bound, then heard Mr Schievella say “don’t do that to her” followed by a loud thud and screaming.

Ms McDonald’s other child, a young girl, woke up when she heard a telephone ringing to find the bedroom door closed. She went to her brother’s room, where she found him tied up on the floor.

After freeing her brother, the children both went to the main bedroom, and found blood-stained sheets covering their mother.

Police say both children then ran to the rear of the house where they saw Mr Schievella lying in the garden with “blood staining around his body”.

Police say they have established that Mr Schievella was a well-known criminal identity and was involved in drug trafficking at the time of his death.

The two children then fled the scene over paddocks to nearby Mittons Bridge road in St Andrews, where they stopped a passing neighbour and raised the alarm.

“No one deserves to die in the way Heather and Michael did – it was described by investigators at the time as a ‘brutal, callous and cowardly attack’ and our current investigators would completely agree with that,” he said.

“It’s even more tragic given we had two young children who were confronted by the sight of their mother and her partner who had been killed in this way.

“We know that Michael had a criminal history predominantly in relation to drugs, and that he had been at a hotel in St Andrews earlier that night with associates.”

Police believe Mr Schievella was at the St Andrews hotel on the night of September 16, 1990, and got into an argument with someone at the venue. Mr Schievella then left the hotel with the people he was arguing with.

“This remains a strong avenue of enquiry for our investigation and we are keen to speak to anyone who may have information, particularly regarding who he was with at the hotel that night and what an argument he had was in relation to,” he said.

“Circumstances can change a lot over 30 years and we are hopeful that the right person with the right information is now ready to speak to police.”

Investigators say they have interviewed a number of people over the past three decades and continue to pursue new information about the double killing.

Any information given will be treated as confidential and may be given at any time to Crime Stoppers on 1800 333 000 or online at www.crimestoppersvic.com.au