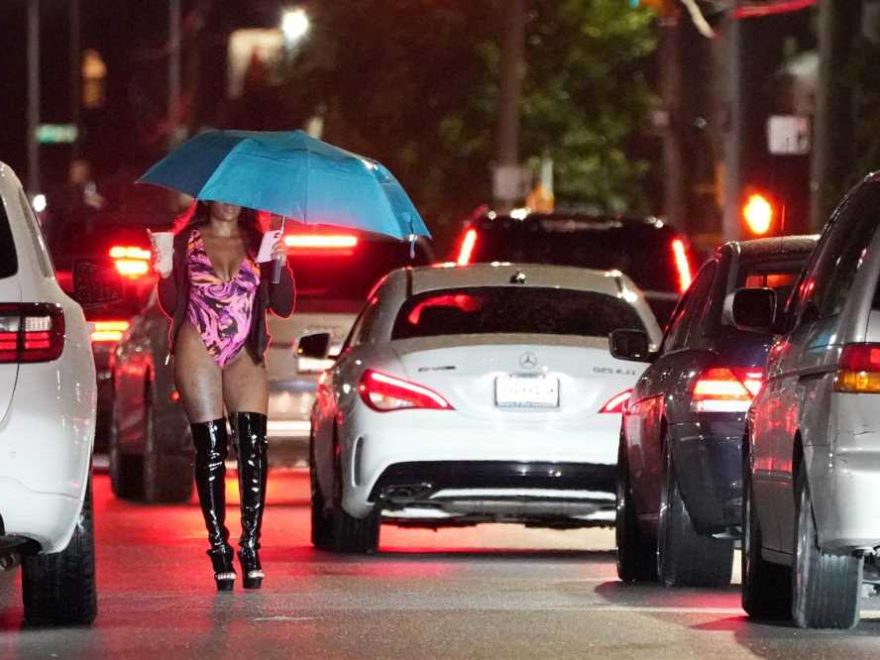 ‘It’s got to be stopped’: Sliwa calls for ‘full crackdown’ on Brooklyn sex market

Skin city: Sex sold openly on the streets of Brooklyn amid lax enforcement

Brooklyn’s open-air prostitution market was up and running over the weekend — with the only deterrence some thunderstorms the blew through Saturday into early Sunday as law enforcement continued to largely sit back and observe the brazen enterprise.

The industrial, four-block stretch where scantily-clad women — many of them likely trafficking victims under the thumb of nearby pimps — have openly enticed motorists for months fell quiet during the downpour.

But as soon as the rain subsided early Sunday, the women slowly emerged, stopping cars and riding off with strangers in a cycle The Post witnessed throughout the night.

Though the number of women working the stretch — and johns seeking their services — appeared down following last week’s front-page Post exposé, those who continued to take to the streets encountered little new in the way of law-enforcement pushback.

The lone marked NYPD vehicle seen in the area — the exact location of which is being withheld to protect the women involved — across more than two hours early Sunday left around the time the storm blew over.

Late Friday into early Saturday, at least three NYPD vehicles were observed patrolling the blocks around the market, though the cops seemed more interested in keeping business moving than making arrests.

“Come on, move!” one cop said over his patrol car’s loudspeaker to a woman wearing a burgundy bra and thong with flip-flops, who seemed unfazed by the order as she leaned against the cab of a parked flatbed.

“Keep moving, let’s go!” came another message from an NYPD vehicle circling near the stretch, where about a dozen johns at a time waited their turn for the pitch of a woman walking from car to car along the block’s double-yellow line.

But business went on despite the disruptions, and the cops weren’t seen taking any further action.

Current and former vice cops have told The Post that there’s little incentive to arrest the women with the office of Brooklyn District Attorney Eric Gonzalez moving away from prosecuting prostitution cases.

The shift began in mid-2019, and culminated earlier this year with the statewide repeal of a law against loitering for the purpose of prostitution.

Sex-trafficking experts have told The Post that targeting pimps and johns — not the women — is the surest way to undermine the industry.

In response to the NYPD insiders’ charge, the DA’s office said that it had only declined to prosecute three prostitution cases so far in 2021, and that it remains ready to vigorously pursue action against alleged pimps.

But state data show that arrests in which patronizing a prostitute or some degree of promoting prostitution was the top charge have consistently declined in Brooklyn since 2018.

A spokesman for the DA’s office on Sunday reiterated that the office has hardly rejected many prostitution cases this year, and suggested a Post reporter “direct the question to the NYPD, which, based on your reporting, have stopped making arrests.”

The NYPD did not immediately respond to questions Sunday about what new approaches — if any — they’re taking to shut down the market.