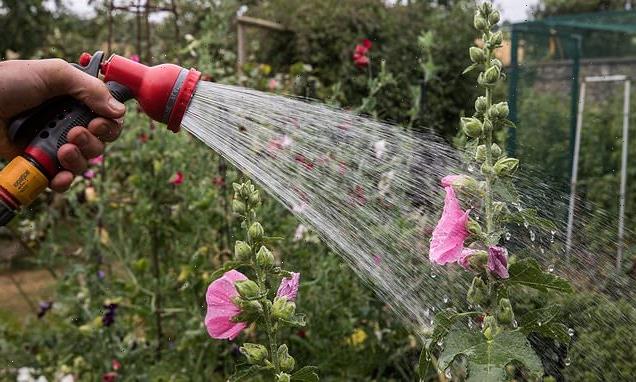 Britons could face fine of up to £1,000 for using hosepipe as water companies impose ban… while wasting millions of gallons a day

At least 17million Britons are facing hosepipe bans after the first wave of restrictions was brought in yesterday.

Southern Water announced it was taking drastic action because of parched rivers and soaring demand in one of the driest years on record.

Any of its customers who use hosepipes to water gardens, wash cars or fill ponds and swimming pools face a potential fine of up to £1,000. The move affects a million people across Hampshire and the Isle of Wight.

But the company did not mention its own leaky pipes which have shed an average of 21million gallons of water a day.

Other suppliers have warned they may also need to act, including Thames Water, South East Water and part of the area covered by Welsh Water. They have asked their combined 17.3million customers to cut back on usage. 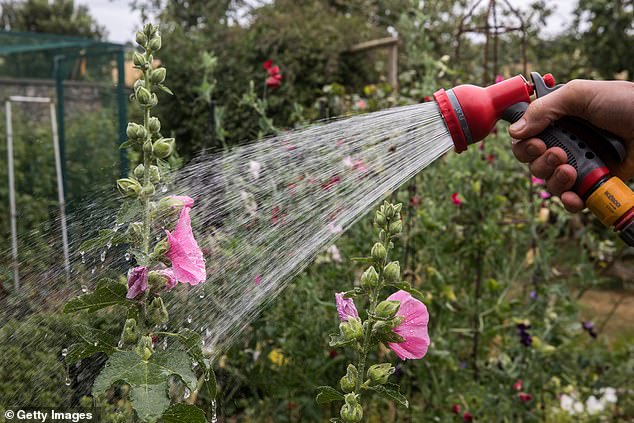 A government source said it was possible that even more firms will have to bring in hosepipe bans. The Met Office said it has been the driest July since 1911 and is forecasting that much of the country will continue to be ‘drier than average’ next month with temperatures higher than usual.

An Environment Agency spokesman said: ‘Southern Water’s announcement of a temporary-use ban for its customers in Hampshire and the Isle of Wight is one of many measures they and other water companies should consider to reduce unnecessary use of water and protect customer supplies and the environment.’

Steve Turner, an expert at the UK Centre for Ecology and Hydrology, said: ‘There is no suggestion of wetter weather in southern areas of the UK in the near future.

‘If that is the case, it is likely that river flows, groundwater levels and reservoir stocks will continue to decline in the south of the country.

‘This would increase the short-term pressure on water supply, and prolonged dry conditions would also mean continued impacts on agriculture and freshwater wildlife.’

Most of England except for the North West has moved into a state of ‘prolonged dry weather’, described by the Environment Agency as ‘the first stage of a drought’, raising the spectre of restrictions on how much water families and businesses will be allowed to use.

Watering a garden using a hosepipe

Filling or maintaining a domestic swimming or paddling pool

Drawing water, using a hosepipe, for domestic recreational use

Filling or maintaining a domestic pond using a hosepipe

Filling or maintaining an ornamental fountain

Cleaning walls, or windows, of domestic premises using a hosepipe

Southern Water’s ban, which comes into force next Friday, will affect 935,000 people in around half a million properties.

It is the first hosepipe ban to be imposed in the region since 2012.

Hampshire has been particularly hard hit this summer, with some spots in the county – including the village of Odiham – not having had a drop of rain all month.

But Southern’s leak-fixing record has been described as ‘poor’ by industry regulator Ofwat. It has failed to hit targets to cut down on leakage, which equates to 40 Olympic swimming pools worth of water lost daily.

England’s last hosepipe ban was announced during the 2018 heatwave by United Utilities, which serves customers in the normally more rainy North West, but it was cancelled at the last minute when the weather broke.

A hosepipe ban on the Isle of Man came into force yesterday.

Alison Hoyle, director of risk and compliance at Southern Water, said river flows were down 25 per cent as a result of one of the driest years on record.

Dr Hoyle added: ‘We haven’t taken this decision lightly and we know the temporary-use ban will have an impact on our customers. We believe a temporary-use ban is a responsible and vital step to reducing the amount of water being taken from the rivers Test and Itchen.’

Earlier this week, the Government hosted an emergency drought meeting with farmers, water companies and other stakeholders to co-ordinate measures.

John Leyland, chief of staff at the Environment Agency, confirmed that the prolonged dry weather had led to exceptionally low river flows across much of the country.

He said: ‘Most of England has already moved into what we term prolonged dry weather status and this is the first stage of a drought. This is how droughts start and the continued hot and dry weather may lead to more environmental problems in August.

‘You may see lower river flows, algal blooms and possibly fish in distress or even death.’

Rivers described as having ‘exceptionally low levels’ include the Thames, the Yare in Norfolk, the Ely and Cam in Cambridgeshire, eastern Rother in Sussex, the Frome in Dorset, the Avon in Hampshire, the Tone in Somerset and the Wye in Herefordshire. 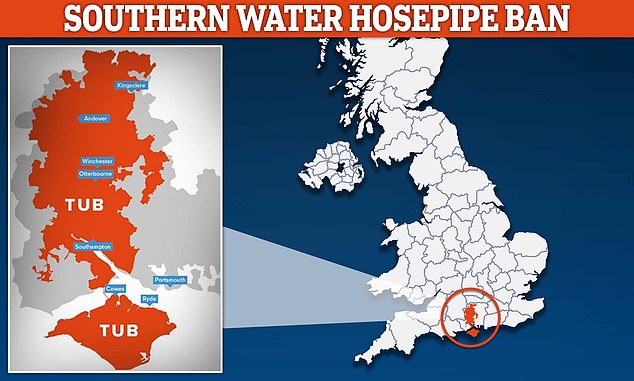 He added: ‘If our assessment reveals voluntary reduction of water use will not allow us to maintain supplies of water for essential use or to protect the environment then we may need to impose more formal bans.’

A Thames Water spokesman said: ‘We know the water we have stored in our reservoirs will continue to reduce, so if we do not receive around or above average rainfall in the coming months this will increase pressure on our resources and may indeed result in the need for more water-saving measures including restrictions.’

A Welsh Water spokesman said most of Wales was in a ‘reasonably good position’ but added: ‘We do have a concern about the situation in Pembrokeshire, where average rainfall has been a lot lower then across the rest of Wales.

‘We are monitoring the situation very closely and communicating with customers there to urge them to use less water.’