Molly Bower, 17, ‘died of complications from mumps’ when she was on a week-long holiday with her aunt and uncle in Alcudia, Majorca

A teenage girl has died on a family holiday after she developed complications from suspected mumps, say her family.

Molly Bower, 17, was on a week-long trip with her aunt and uncle to Alcudia in Majorca when she began showing symptoms.

This is despite her having been given her childhood immunisations – raising the shocking prospect that she could have picked up the virus from an unvaccinated carrier.

Doctors fear the return of higher death rates in children caused by measles, mumps and rubella because fewer are having the MMR jab.

Molly first complained her face felt swollen shortly after they landed on October 7. She told family she thought she had an abscess, but when they looked up her symptoms online they became worried she had mumps. They followed advice and gave her ibuprofen, but Molly’s condition deteriorated. She began to vomit and became delirious.

She was seen by an in-house doctor on Friday at Club Mac Alcudia, where the family were staying.

The doctor also believed she had mumps and prescribed paracetamol and ibuprofen, but she died less than 24 hours later.

A post-mortem examination on Molly, from Sherburn Hill, County Durham, is expected to take place. Her devastated family last night said she had been immunised as a child.

County Durham has the best uptake of MMR in England. Last year 96.4 per cent of children had received both doses of the vaccine by their fifth birthday. 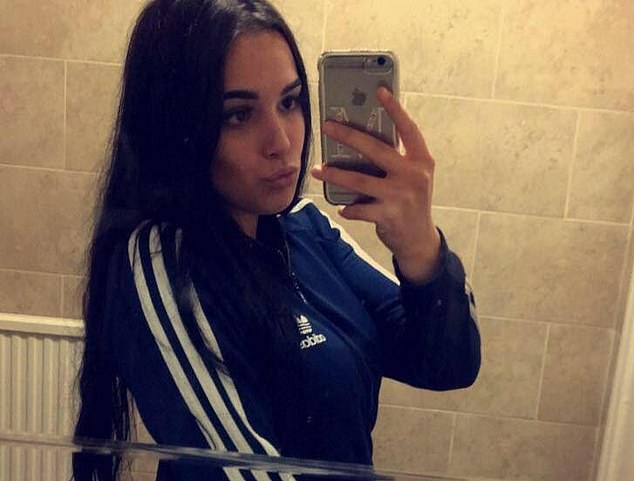 High uptake rates are crucial in creating ‘herd immunity’ – indirect protection from disease that occurs when a large percentage of a population is immune.

However, complacency among parents and some doctors – along with unfounded fears over the MMR jab fomented by misinformation campaigns on the internet – have hit immunisation rates all over Britain. Panic around the MMR vaccine began in 1998 after now-disgraced doctor Andrew Wakefieled linked the jab to autism, in a study which has since been discredited.

Measles, mumps and rubella are all potentially serious, even deadly, illnesses. Last week The Mail launched its ‘Give the children their jabs’ campaign amid a rising number of cases of measles fuelled by falling vaccination rates.

Molly was treated for tonsillitis two weeks before the holiday, her family said, which could have compromised her immune system.

Symptoms of mumps usually disappear after around a week. However, it can damage fertility in boys and can trigger meningitis. Dominique Bower, Molly’s aunt, said: ‘Molly’s face started getting more and more swollen when we got to Majorca.

‘By Tuesday evening she had started to be sick and go downhill. On the Wednesday a friend googled her symptoms and said she thought it was mumps.

‘All her symptoms showed it was mumps but the online advice just said to take ibuprofen and that was all we could do.

Miss Bower added: ‘During the Thursday evening she was delirious. She could not eat and kept on asking what we were saying. She would say that she could not hear us and complained that she was aching all over her body. The resort doctor touched her neck and immediately he said “mumps”. He suggested paracetamol and ibuprofen every six hours.

‘Within a few seconds of taking it, Molly drifted off to sleep. We later tried to wake her for a shower, we couldn’t get her to walk, it was like carrying a dead weight. I left the room for five minutes afterwards to get her more clothes and the next thing I knew I heard screaming [from a family friend].

‘Molly’s eyes had rolled into the back of her head and she had stopped breathing.’ Doctors tried to save the teenager for two hours before she was moved to hospital where doctors confirmed she had been struck down by mumps.

Her body is yet to be repatriated. A fundraising site, set up to help the family with funeral costs, has attracted more than £9,000.

Molly’s mother, Danielle Bower paid tribute to her daughter last night. ‘She was a fit and healthy young woman,’ she said. ‘Molly had such a dry sense of humour and was a really strong girl. She was an honest and loyal person with good manners. She loved to go out and socialise. She was really bubbly and just so beautiful.’

■ Donations can be made at: www.gofundmecom/f/jearzr-bring-molly-home

‘Bring back specialists to reverse dip in vaccine rates’

Hundreds of immunisation specialists should be hired by the NHS to reverse falling vaccination rates, experts say.

And experts have called for the post of district immunisation co-ordinator to be reinstated amid the decline in vaccinations.

Before Andrew Lansley’s NHS reforms in 2013, there were more than 200 co-ordinators in England. But when primary care trusts were abolished six years ago the co-ordinators were replaced by ‘screening and immunisation leads’. But there are only 23 of these, with each merely responsible for ‘commissioning’ vaccination services rather than running them.

And each covers a far larger area. In London for example, 31 district immunisation co-ordinators were replaced by a single screening and immunisation lead. Helen Donovan, who leads on public health at the Royal College of Nursing, was a co-ordinator in Haringey, North London, until 2013.

She said: ‘I was responsible for 50 or 60 GP practices and I knew them well. I knew the nurses and I had responsibility for scrutinising the data.’

Boris Johnson vowed to examine the issue in his new vaccination strategy, due to be published in the coming weeks.

Dr Doug Brown, of the British Society for Immunology, said co-ordinators play a ‘crucial role’ in ensuring that vaccination rates are kept high.

And Dr Mary Ramsay, Public Health England’s head of immunisation, said: ‘Strengthening the role of immunisation co-ordinators would mean that local people, who know their communities, are there to support GPs and nurses to ensure children receive vaccinations.’

A Department of Health and Social Care spokesman said: ‘We are already working to strengthen the role of local immunisation co-ordinators.’