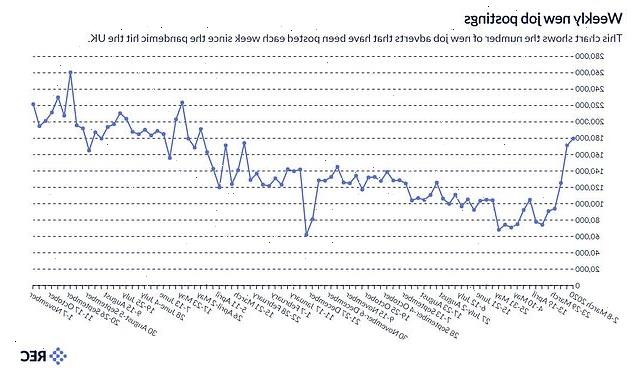 Around 221,000 new job adverts were posted in the first week of November which was the fourth highest weekly figure since the start of last year, according to the Recruitment and Employment Confederation (REC).

The body said the biggest rises in ads were for driving instructors, prison officers and forklift truck drivers, compared with falls for construction sector roles such as painters and decorators, roofers and bricklayers.

That brought the total number of active job postings to 2.68million, which was another new record high. The REC added that the increase in job ads shows no signs of slowing down in the build-up to Christmas.

Industry experts said huge numbers of people are now moving jobs because they had waited earlier this year amid uncertainty caused by the pandemic, while others in their late 50s or 60s were deciding now is the time to retire.

The biggest weekly rises in ads were for driving instructors (up 32 per cent), prison officers (up 13 per cent) and forklift truck drivers (up 9.1 per cent) – when the week of November 1 to 7 was compared to October 25 to 31.

The REC, which is based in London, also reported a notable fall in ads for construction sector roles such as painters and decorators (down 17.8 per cent), roofers (down 13.4 per cent) and bricklayers (down 11.3 per cent).

It also found that UK’s top hiring hotspot last week was Telford and Wrekin (up 19.4 per cent) followed by South Teesside (up 13.9 per cent). Three of the bottom ten local areas for growth in job ads were in eastern England.

These were Breckland and South Norfolk (down 3.6 per cent), North and West Norfolk (down 2.4 per cent), and Bedford (2.2 per cent) – while Swindon, Liverpool and Cornwall and the Scilly Isles saw notable rises in ads.

There were mixed fortunes in Greater London, where ad numbers as a whole were relatively unchanged. While a number of areas were in the top ten hiring hotspots, including Harrow and Hillingdon (up 10 per cent) and Bexley and Greenwich (up 9.8 per cent), others such as Barnet (down 7.9 per cent) found themselves in the bottom ten. 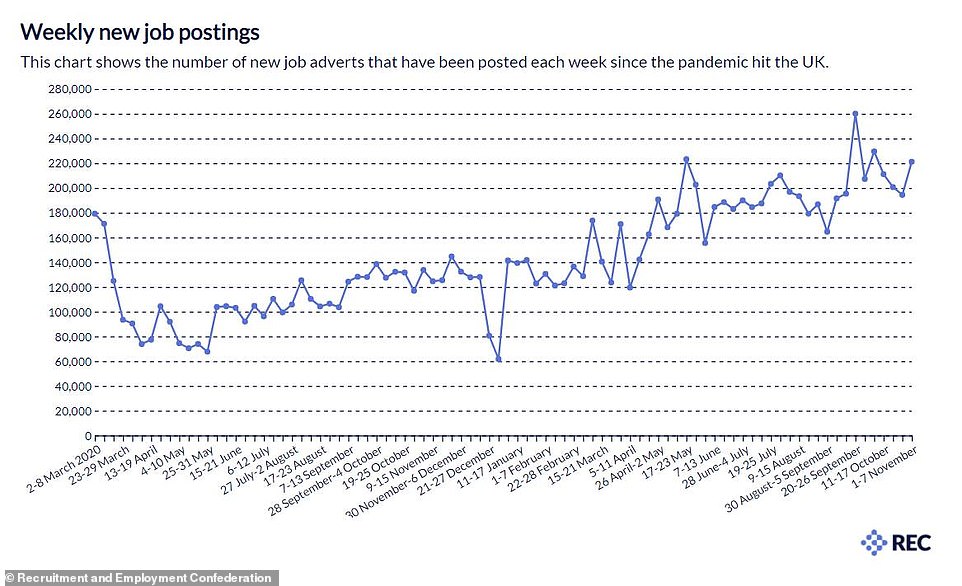 221,000 new job adverts were posted in the first week of November – the fourth highest weekly figure since the start of 2020

‘Most of our members – at the REC, we represent the recruiment industry – are saying it’s taking at least a month longer to fill vacancies at the moment than normal.

‘And with 221,000 new vacancies coming onto the market last week, there’s clearly strong demand. But also that high number, 2.7million vacancies still live, that’s probably because some of those vacancies are taking longer to fill.’

He was asked whether one reason for the shortages of labour getting worse in some areas were because people were being lured into some jobs such as lorry drivers which were offering better pay.

And Mr Carberry said: ‘What tends to happen over time is that particularly shortages of people are attracted towards those sectors. One of the areas where we’re seeing a big upturn in vacancies at the moment is care homes.

‘That’s because the demand for care is rising but that’s also because workers in care maybe have been temped into other sectors as they’ve opened as well.’

On hospitality, he added: ‘We’ve seen a big bounce back in hospitality over the course of this year and of course this is key hiring season traditionally in the hospitality sector, very busy in November and December.

‘The area that’s maybe a bit slower at the moment is construction and we think that’s about some of the supply chain challenges construction has had on materials, just slowing down what’s happening on sites.’

Mr Carberry said the REC measures salary changes by asking recruiters about the starting rates for permanent jobs and the rates for temporary jobs that they’re placing at the moment.

He added that in October there was the widest spread and fastest rise in rates of pay that the REC has seen since its survey started back in 1997.

Mr Carberry continued: ‘While salaries for starting new jobs are rising everywhere, anecdotally we’re hearing that they are rising much more in key shortage sectors – areas like driving, but also IT is a big area of pay inflation, and maybe rising a bit less in some other areas.

‘One of the big questions for early next year is how much of that is trying to attract new people from the labour market, versus the kind of pay rises that companies might choose to put through for their own staff.

‘That doesn’t seem to have risen quite as much yet, and of course with inflation being as high as it is, there’s likely to be some pressure about that in early 2022.’

He also commented on discussion about the trend of the ‘Great Resignation’, where people are quitting their jobs for varying reasons, and this has been suggested as one of the factors behind the increase in job ads.

Mr Carberry said: ‘It certainly is the case that earlier in the year recruiters were reporting that people weren’t quite ready to move jobs because of the uncertainty still being around.

‘Now they are – I don’t think it’s about people walking out on employers who they are dissatisfied with, it’s just that nobody moved jobs for about a year, and we’re getting all that activity all at once as people try to move their career on, get that pay rise that they want. Moving is also a way to increase pay.

‘The other big trend that we’re seeing is maybe people deciding in later career that now is the time to step away and retire. 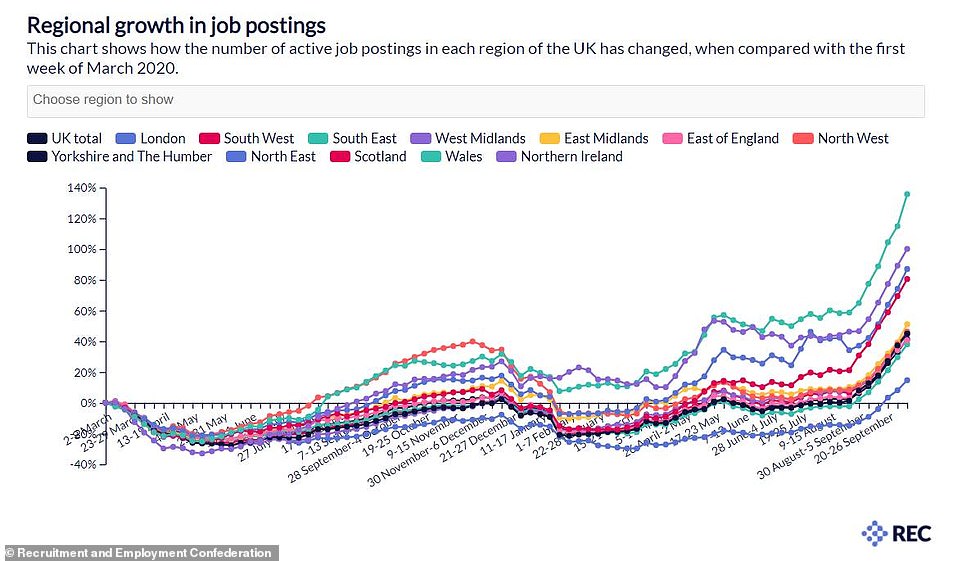 This REC graph shows how job vacancies have varied by area. The UK’s top hiring hotspot last week was Telford and Wrekin

‘So we’re seeing quite a few people in their late 50s and 60s say now’s the time to do something different. And that generational change is quite a big theme in what we’re seeing from employers at the moment.’

It comes as tens of thousands of care home staff who have not had both Covid-19 vaccine doses are now unable to legally work in care homes after the Government’s mandatory jab policy kicked in yesterday. Staff working in registered care homes in England must have had both jabs to continue in their role, unless medically exempt.

NHS England figures show that more than 56,000 current staff in care homes for younger and older residents had not been recorded as having received both doses as of November 7 – four days before the deadline. Several thousands of these are understood to have self-certified as medically exempt or to have applied for formal proof.

Health officials expect the number of double vaccinated staff to have risen in the three days between Sunday and Thursday. It is unclear how many staff have already quit due to the requirement.