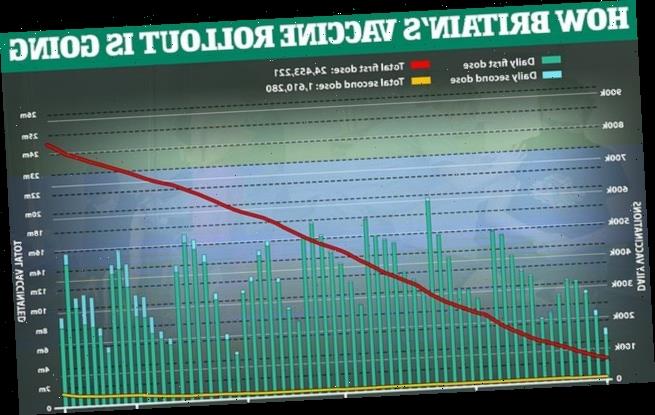 Britain is on track to roll out Covid vaccines to millions of adults in their forties by the end of March — even if the programme doesn’t speed up as much as expected.

NHS bosses have told clinics to prepare to dish out twice as many doses as usual from today, raising the prospect of the UK hitting a staggering five million vaccinations every week.

And with another fortnight before millions of second doses must start to be given out to those who first got jabs in January, the country is in a race against time to reach as many people as possible. Almost 24.5million people have been immunised so far in the UK.

MailOnline analysis shows Britain, which is working through the population by age, should be able to move on to the under-50s by March 29 at the latest, if it continues the current average of 280,000 first doses every day.

And if the rollout manages to double in speed – as officials hope will happen after a massive boost in supply from AstraZeneca — the under-50s target could be hit even earlier on March 20.

Ministers are aiming for at least 90 per cent of the adult population to take up the offer of a vaccine, equal to around 28.8million people in the top nine priority groups for vaccination, including all over-50s, health and care workers and people with long-term health conditions.

If the current rate is maintained, Britain will reach 50 per cent of its adult population – 26million out of 52m – by the end of this week. 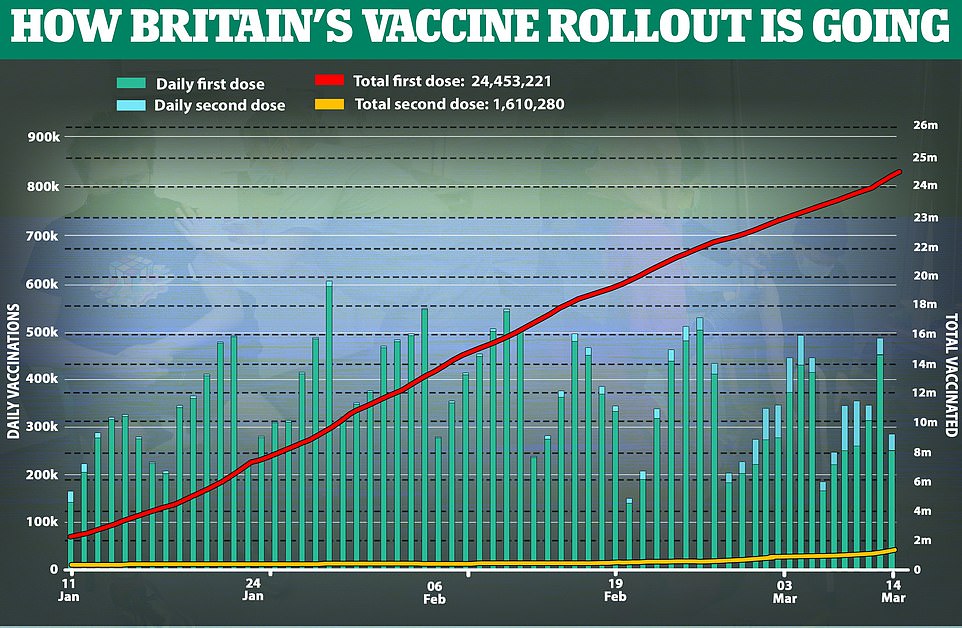 The UK has given first doses to 24.2million people and second doses to 1.6million as of Sunday

Boris Johnson and Nicola Sturgeon today mounted a staunch defence of the AstraZeneca vaccine after France, Italy and Germany became the latest EU states to pause its use.

The PM insisted the jabs are ‘both safe and effective’ while the First Minister urged Britons to keep coming forward, pointing to ‘significant and growing evidence of the benefits’ in terms of saving lives, preventing symptoms and curbing transmission.

The EU now looks set to embrace Russia’s Sputnik V Covid jab even as its leaders shun British-made AstraZeneca vaccines, with multiple countries halting its use over fears it could cause blood clots.

That is despite European regulators, the World Health Organization and the firm itself insisting the two-dose jab is safe.

France, Italy and Germany today became the latest countries to bring in a pause this afternoon — following the lead of Ireland, the Netherlands, Denmark, Norway, Iceland and Bulgaria.

Berlin’s Health Ministry said the move was a ‘precaution’, while French President Emmanuel Macron and Italy’s medicines agency revealed they would wait for the European Medicines Agency’s final decision on the safety of the vaccine tomorrow.

Meanwhile, Italy — which has already suspended use of a particular batch of AZ jabs — will begin a new lockdown today, Paris is facing tighter measures as cases overwhelm hospitals, and German ICU doctors say an ‘immediate’ return to lockdown is necessary.

NHS leaders a fortnight ago urged vaccination centres to prepare for bumper deliveries in the second half of March after a lull at the end of February and the start of this month.

Around 280,000 first doses were dished out every day last week, on average. But this was down from a figure of almost 450,000 at the start of February when the rollout was surging ahead.

At last week’s pace, it would take Britain just another 16 days to vaccinate 28.8million people — the equivalent of 90 per cent of the top priority groups including everyone over the age of 50, adults with underlying conditions and NHS and care home workers.

If Britain was to double the current speed and hit 560,000 doses per day, the target would be reached on March 20.

The goal would still be reached on March 23 if the speed was 400,000 a day, faster than last week but slower than the doubling that medics were told to expect.

NHS England has not yet expanded the rollout to the 20million adults aged between 50 and 55 – even though Northern Ireland made the move last week.

Wales started inviting over-50s for shots earlier this month and Scotland says it will start offering those in the 50-54 age group appointments from next week.

It is expected the daily vaccination figures could slow down as Britain approaches its target because centres that have jabbed priority groups will be left waiting until they can move down a tier.

The analysis was based on the 90 per cent uptake observed among over-75s. Ministers had initially expected only 75 per cent of at-risk Britons to get the jab but were blown away by the high uptake rates.

It comes after it emerged Premier League footballers will be used in a PR blitz to encourage young Britons to get vaccinated against Covid when the rollout moves down into the under 40s.

Culture Secretary Oliver Dowden has reportedly written to top clubs to ask for their help in the mammoth roll-out.

There are fears that uptake will be lower in younger adults, who are least likely to fall seriously ill or die from Covid. But their participation in the programme is essential because they are among the most likely to carry and spread the disease.

A Whitehall source told The Sun newspaper that the Premier League was ‘involved’ in the scheme to boost uptake in under-30s.

The insider added that footballers would be used because they are ‘people younger groups look up to’.

The Sport Select Committee chairman told the newspaper: ‘This campaign should… enlist the help of major sporting figures from the likes of the Premier League in order to put out the message that vaccination is safe, and the right thing to do for yourself and others.’

An Office for National Statistics survey published last week showed more than nine in ten unvaccinated Brits would get the jab. Ministers had initially predicted 75 per cent would turn up for appointments.

NHS figures show that more than 90 per cent of over-60s have already had at least one of their injections.

But there are still concerns about uptake among BAME, young and poor Britons.

The ONS survey found, among black adults, 44 per cent reported vaccine hesitancy, more than twice the proportion of any other ethnic group.

The 16 to 29 age group was the most likely to turn down the jab (17 per cent), while the figure was 16 per cent among adults in the most deprived areas of England.