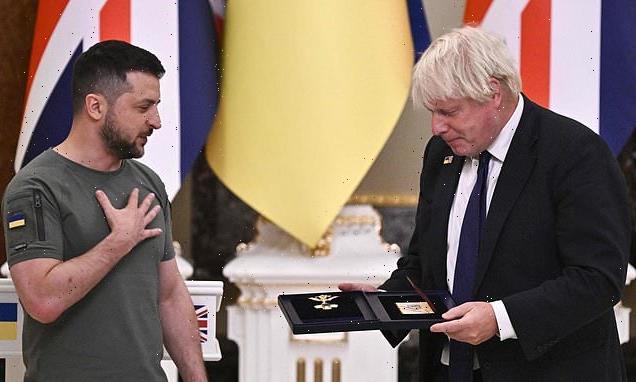 Our energy bills are rising… but Ukraine is paying in blood: Boris Johnson warns that British families must put up with high costs for sake of people in war-torn country as he is handed grateful nation’s highest honour to mark Independence Day

Boris Johnson has warned that UK households must endure soaring energy bills for the sake of Ukrainian civilians, who are ‘paying with blood’ for Vladimir Putin’s aggression.

The Prime Minister defied Russian missile attacks to visit Kyiv on a surprise trip to mark Ukraine’s Independence Day, where he was mobbed by onlookers as he strode through the sunny capital with president Volodymyr Zelensky.

The Queen last night said she was hoping the world can look forward to better times in an address to mark the independence day.

The British embassy in Kyiv published the message as the country celebrated the anniversary in the midst of the Russian onslaught.

In a series of tweets, the account said: ‘On their 31st anniversary of Independence, Her Majesty The Queen congratulates Ukrainians.’ 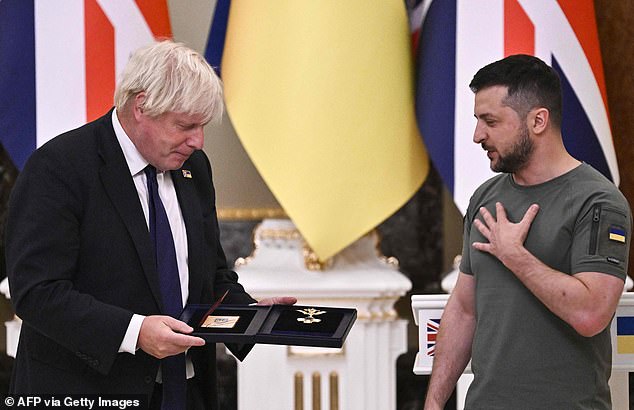 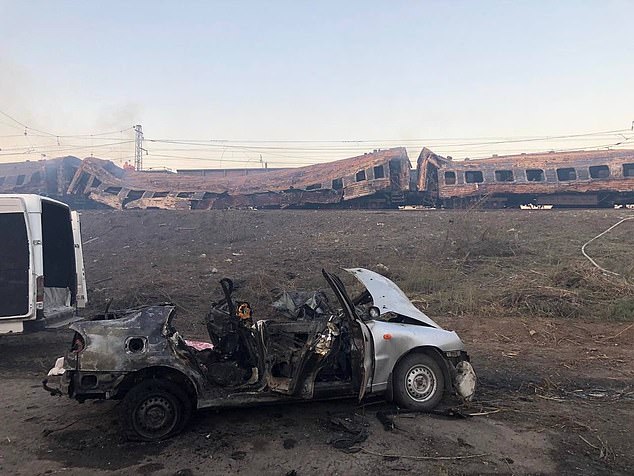 Aftermath: A car wreck lies in front of a burnt-out train after a Russian air strike that left 15 dead near the city of Dnipro 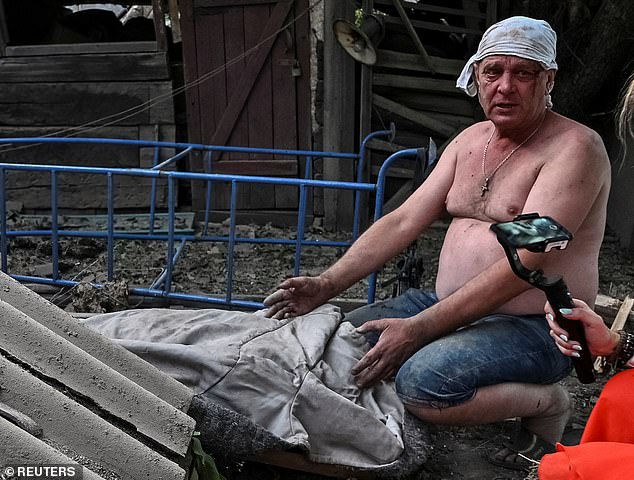 A man reacts next to the body of his 11 years old son who was killed by a Russian military strike, as Russia’s attack on Ukraine continues, in Chaplyne yesterday 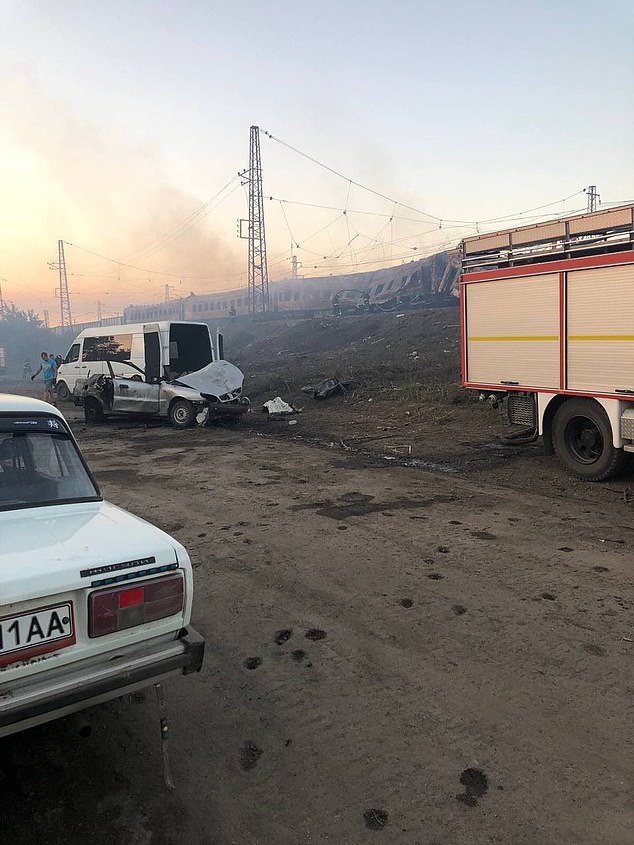 Charred and flattened train carriages, as well as wrecked vehicles, parked near the rural station in Chaplyne 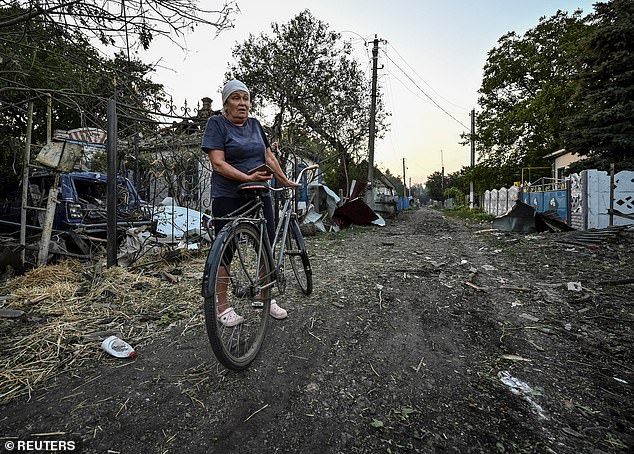 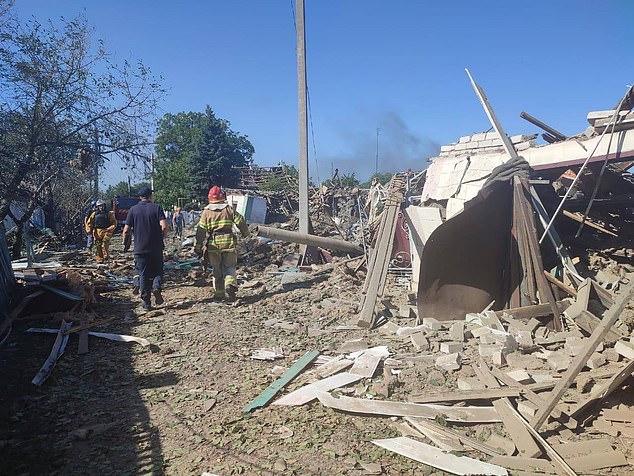 In her address to the president of Ukraine she said: ‘It gives me great pleasure to send Your Excellency and the people of Ukraine my warmest greetings on the celebration of your Independence Day.

‘In this most challenging year, I hope that today will be a time for the Ukrainian people, both in Ukraine and around the world, to celebrate their culture, history and identity. May we look to better times in the future. Elizabeth R.’

Mr Johnson said he had come to underline Britain’s unwavering, long-term commitment to Ukraine on what is also the six-month anniversary of Putin’s invasion.

He told Mr Zelensky that his country ‘can and will win the war’ in the face of Russian imperialism, while also unveiling a new transfer of cutting-edge drones.

Writing in the Daily Mail today, Vadym Prystaiko, Ukraine’s ambassador to the UK, hailed this country’s efforts, saying he is ‘proud and humbled to see my nation’s flag flying alongside your own, up and down this wonderful country’.

On his trip, Mr Johnson underscored the tough domestic ramifications for the UK.

He said British households would ‘have to endure the cost of living crisis’ in order to counter Russia’s ‘inevitable manipulation of energy prices’.

He added: ‘While people are paying energy bills, people in Ukraine are paying with blood.’

The dramatic intervention on the cost of living crisis came as new figures showed that Britain imported no fuel from Russia in the month of June – for the first time since records began 25 years ago – while other imports from Russia dived by 96.6 per cent.

The Prime Minister’s trip to Ukraine was organised in complete secrecy, coming as it did amid multiple warnings from western intelligence agencies that the Kremlin would mark Ukraine’s special day with a barrage of revenge strikes on its cities.

Those expected attacks took place in several regions, but the capital itself was not struck as of last night, although air raid alarms in the city continued to shriek.

The most devastating strike of the day came when a passenger train was hit, killing at least 15 and injuring 50.

Pictures showed charred and flattened train carriages, as well as wrecked vehicles, apparently parked near the rural station in Chaplyne, a village near the city of Dnipro.

During this visit – his third to the city since the invasion and his last as Prime Minister – Mr Johnson received Ukraine’s highest award that can be bestowed on foreign nationals, The Order of Liberty.

He was also honoured with a plaque on the city’s Alley of Bravery.

These include 850 hand-launched Black Hornet micro-drones, which are designed for use in towns and villages, and are deployed to detect approaching enemy forces.

Military personnel can be trained to fly the helicopter drones – smaller than a mobile phone – in less than 20 minutes. 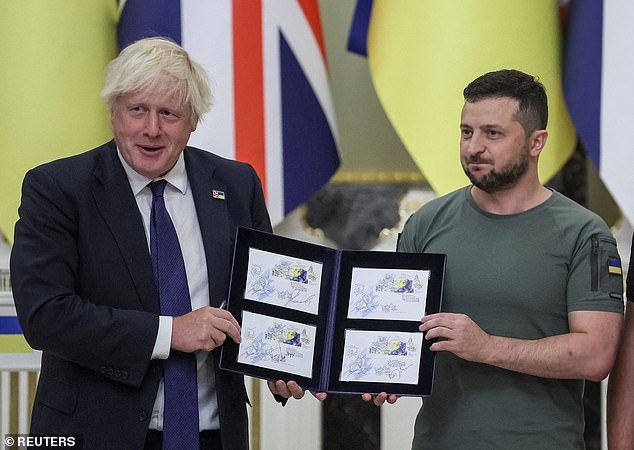 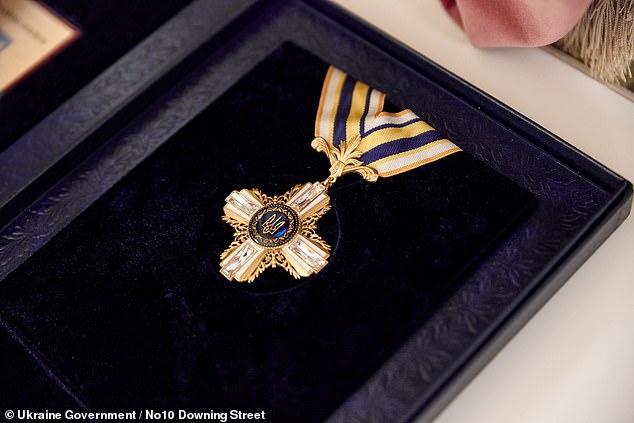 Boris Johnson was given Ukraine’s highest award that can be bestowed on foreign nationals, ‘The Order of Liberty’, for the UK’s staunch support of Ukraine’s freedom 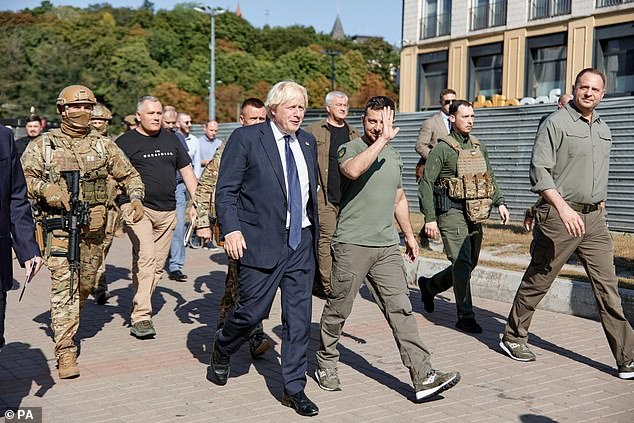 Mr Johnson said he had come to underline Britain’s unwavering, long-term commitment to Ukraine on what is also the six-month anniversary of Putin’s invasion 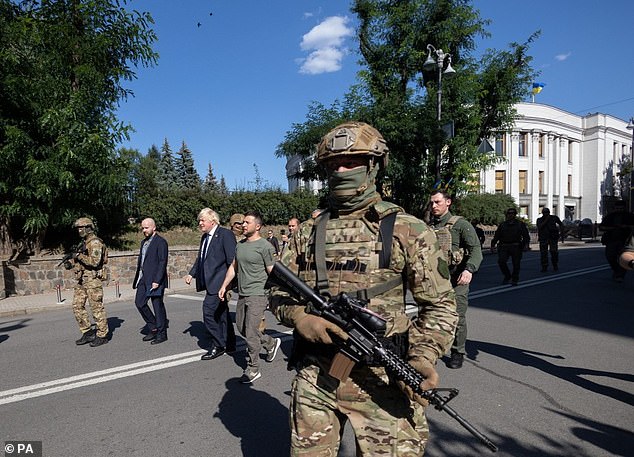 Boris Johnson walks with Volodymyr Zelensky and Ukrainian soldiers, after making a surprise visit to Kyiv in support of Ukraine, as it marks 31 years of independence from the Soviet Union

The UK has committed more than £2.3billion in military and financial aid to Ukraine since the invasion began in February.

Mr Johnson said: ‘For the past six months, the United Kingdom has stood shoulder-to-shoulder with Ukraine, supporting this sovereign country to defend itself from this barbaric and illegal invader.

‘Today’s package of support will give the brave and resilient Ukrainian armed forces another boost in capability, allowing them to continue to push back Russian forces and fight for their freedom.

‘What happens in Ukraine matters to us all, which is why I am here today to deliver the message that the United Kingdom is with you and will be with you for the days and months ahead, and you can and will win.’

He called on the international community to stay the course.

Meanwhile, the US announced nearly $3billion (£2.5billion) in military aid to Kyiv, its biggest package of help yet. 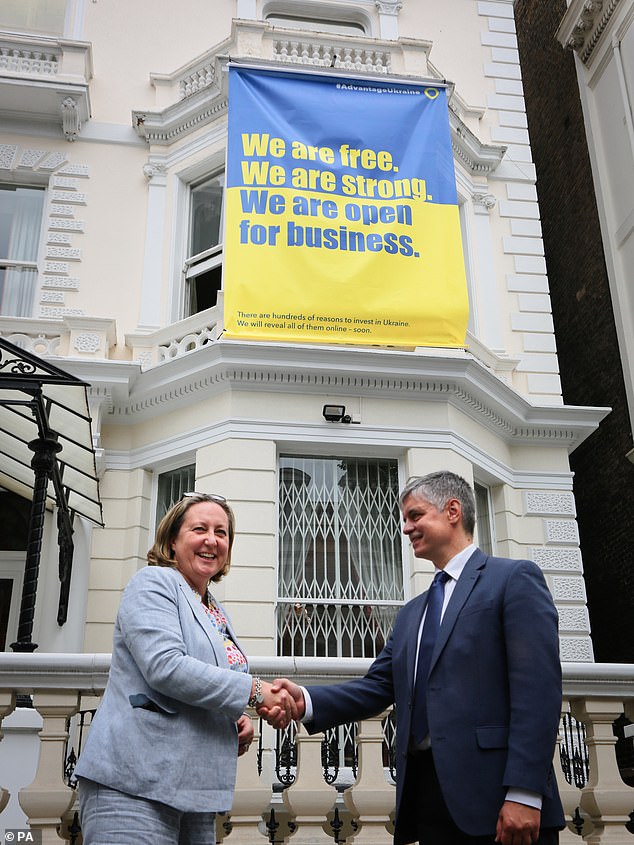 Writing in the Daily Mail today, Vadym Prystaiko (right, pictured with International Trade Secretary Anne-Marie Trevelyan), Ukraine’s ambassador to the UK, hailed this country’s efforts, saying he is ‘proud and humbled to see my nation’s flag flying alongside your own, up and down this wonderful country’ 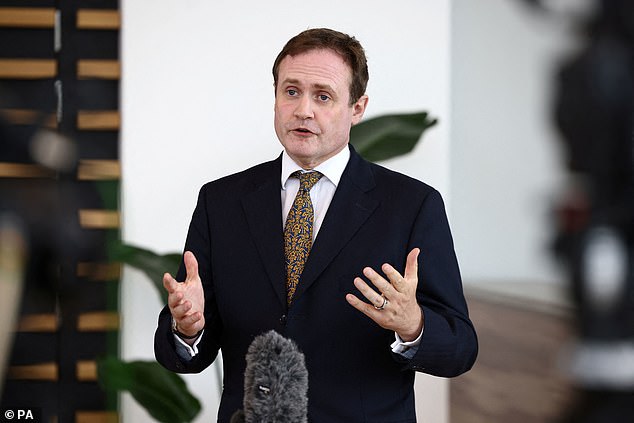 ‘The challenge now is that someone has to come up with that long-term plan,’ said chairman of the Commons foreign affairs committee Tom Tugendhat

Against all expectations, Ukraine managed to repulse the Russian assault on Kyiv at the start of the invasion and, in recent weeks, has launched its own attacks on enemy bases in occupied Crimea.

But, talking to Ukrainian MPs, the Mail was told how they feared the West – particularly the EU – was wavering over continued financial, political and military support.

Most crucially, they wonder which Western powers will take charge of ‘a strategic plan’ to support Ukraine from this point if, as expected, the war continues for months or years more.

Tom Tugendhat, chairman of the Commons foreign affairs committee, was also in Kyiv as part of a delegation of international parliamentarians.

He underlined these concerns to the Mail. He said: ‘The challenge now is that someone has to come up with that long-term plan. It will require not just one government, but several, and it may take years to deliver.’

In his speech to the nation yesterday Mr Zelensky promised that Ukraine will resist the Russian invasion ‘until the end’.