Please let us reunite with our loved ones abroad: Families who are separated from overseas relatives urge ministers to relax travel curbs… as Boris Johnson sparks anger by suggesting test and quarantine rules could remain until NEXT YEAR

Travel chiefs reacted with fury last night after Boris Johnson appeared to suggest cumbersome testing and quarantine measures could remain in place until the end of the year.

Despite soaring Covid vaccination levels in the UK and abroad, the Prime Minister warned it would be a ‘difficult year’ for international travel, with holidaymakers facing continued ‘hassle’ and ‘delays’.

He confirmed ministers were ‘looking at’ relaxing some curbs for fully-vaccinated people, but warned: ‘I want to stress that the emphasis is going to be on making sure that we can protect the country from the virus coming back in.’ 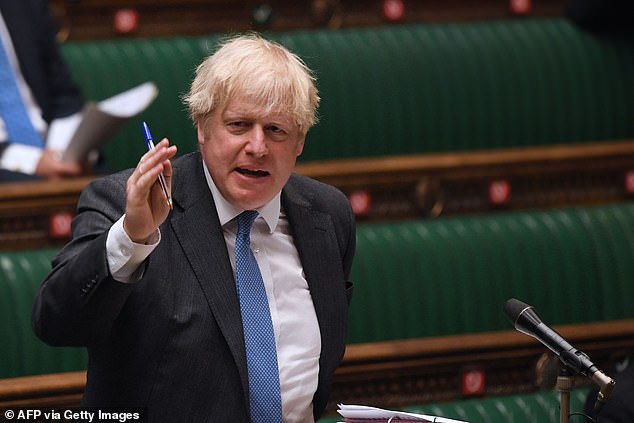 He added: ‘This is going to be, whatever happens, a difficult year for travel. There will be hassle, there will be delays, I’m afraid, because the priority has got to be to keep the country safe and to stop the virus coming back in.’

The travel industry warned that current restrictions could cost the economy nearly £20billion – more than £600million a day – in July alone. Ministers will meet this week to consider whether any countries should be added to the quarantine-free green travel list. Just 11 destinations are currently on the list and no major European hotspots are expected to be added from next week.

Officials will also discuss whether fully-jabbed adults should be allowed to travel to amber list countries with their children without having to quarantine at home for up to ten days on return.

However, any change to this effect is unlikely to take effect until late July.

Even if approved, families may still face costly and cumbersome testing requirements as part of efforts to keep Covid variants out of the country. Spain, Italy, Greece, Portugal and France are all on the amber list, meaning travellers must self-isolate for at least five days on return.

The Government currently insists Britons should only go on holiday to green list countries.

The policy is at odds with the US and EU, which allow fully-vaccinated travellers to sidestep testing and quarantine requirements to low-risk countries.

Travel chiefs last night sent an open letter to Mr Johnson warning of the cost to the economy if ministers fail to kick-start international. The World Travel & Tourism Council said more than 200,000 UK jobs are at risk if significant action to drop curbs and reopen the skies is not taken this week. It said 307,000 jobs had already been lost last year.

The council urged ministers to harness the success of the vaccine rollout by immediately relaxing testing and quarantine measures for fully-jabbed travellers arriving from green and amber countries.

Virginia Messina, of the council, said: ‘If international travel remains off-limits for the whole of July, WTTC research has shown that every day the UK would lose a staggering £639million, severely delaying the UK’s economic recovery and competitiveness. Stalling the resumption of international travel until August could cost the country dearly. We simply can’t afford any further delay – we are running out of time and money, with many businesses facing going bust if international travel doesn’t resume in July.’

Paul Charles, of the PC Agency travel consultancy, said: ‘They are still taking a very cautious approach, but every day that they are not opening up they are costing the economy hundreds of millions of pounds. And the data is showing there are no variants of concern coming from amber countries. So not only should we have amber countries being green instead, but the fully-jabbed should be able to go anywhere – except to red countries – with just one pre-return test.’

Tim Alderslade, of Airlines UK, said of Government policy: ‘The virus is already here and this is once again treating international travel differently to the domestic economy. The Government’s own data shows…it is perfectly safe to open up travel to many countries whilst maintaining a robust red list to high-risk destinations.’

It comes after analysis of NHS Test and Trace data showed fewer than one in 200 UK travellers from amber countries are testing positive for Covid on their return.

The data also revealed that no variants of concern were detected from any passengers returning from the 167 countries on the amber list. Between May 20 and June 9, just 89 of 23,465 passengers who travelled to the UK from amber countries tested positive for Covid – a rate of just 0.4 per cent. Meanwhile, no one arriving from green list countries tested positive, with no variants of concern detected. The travel industry called for the Government’s traffic light system to be reviewed.

Alan French, of Thomas Cook, said: ‘We’ve long argued that the Government should take into account people’s vaccination status when it designed the current traffic light system so it’s great to see that this is going to happen hopefully in time for the summer holidays.

‘With around half the population double-jabbed we would encourage the Government to introduce these new measures as soon as possible to give families confidence and certainty they can get away this summer for some much-needed weeks in the sun.’ It came after analysis last week showed that fully-jabbed travellers are safer going to amber countries than non-vaccinated travellers visiting green destinations.

Please, let us reunite with our loved ones abroad

One British mum now living in Turkey told of her heartbreak at not being able to visit her parents with their 18-month-old granddaughter Ela since Christmas, after Turkey went on the UK’s red list. 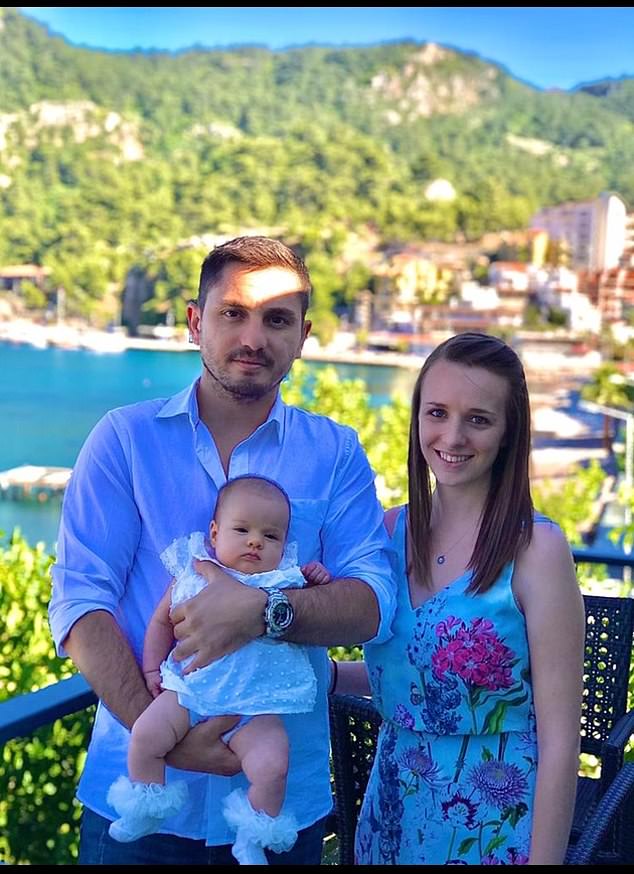 Kate, 28, and Orcun Can, 33. Kate is British and lives in Turkey but has been unable to see her family for 6 months due to travel restrictions 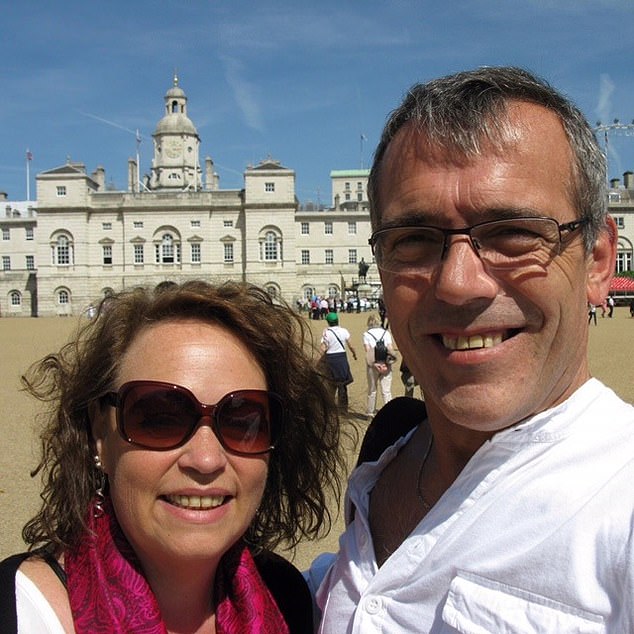 Pippa Twigg, 56, and Darren Hunt, 56. They both live in Cyprus but have had 14 flights cancelled since the start of the pandemic. It means Pippa has not seen her family back home in the UK since Jan last year

She is due to give birth to her second daughter in August, so fears it may be several more months before a family reunion will be possible.

Mrs Can said the situation is improving in Turkey and believes it should go amber, with ten-day home quarantine also dropped for arrivals into the UK from these medium-risk countries.

She said: ‘My dad has only seen his granddaughter for four weeks out of her 18 months of life, my mum the same. If someone’s had a vaccination, especially double-vaccinated, I don’t understand why they can’t travel.’

Meanwhile, Pippa Twigg, 56, lives in Cyprus with her partner Darren Hunt, also 56. Due to repeated cancelled flights she has been unable to make it back to the UK since January last year. The couple moved to Cyprus, currently on the UK amber list, four years ago.

She said: ‘We have had 14 flights cancelled since all this started. I missed Christmas with my family last year, my mother’s 80th birthday in September and it’s my son’s 30th birthday next Monday and I’m now not going to be able to return for that. Not only that, we’ve had two new grandchildren that I have never seen. Ola is Polish but has lived in Wales since 2014. She says that travel restrictions and the cost of tests mean her parents in Poland have been unable to meet Oskar since he was born in September last year

‘If they push Cyprus on the green list, or allow vaccinated people to travel, people can go back without having to self-isolate which means airlines might actually run their flights as scheduled.’

Ola Smith, 29, is a Polish national who lives in Wales with husband Dan Smith, 33. She gave birth to their nine-month-old son Oskar last year but has been unable to take him to Poland to meet her parents.

Mrs Smith, who moved to the UK in 2014, said the family have been unable to afford to go to Poland due to testing and quarantine requirements. She said: ‘It’s been really, really hard for them not being able to meet Oskar, and for us. If someone has been fully vaccinated…then let people travel.’

Johan Lundgren, chief executive of easyJet, said: ‘These moving stories show why the ability to travel is so important. We urge the Government to reopen and we look forward to playing our role in reuniting them.’