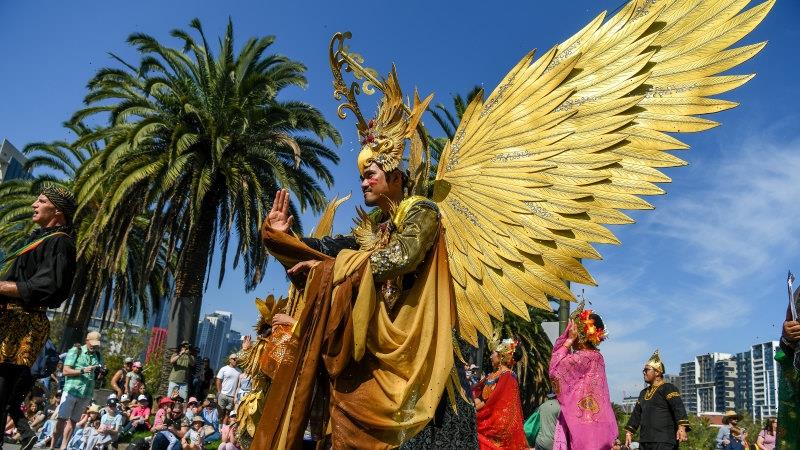 The cloud and fog gave way to a stunningly warm, sunny day. 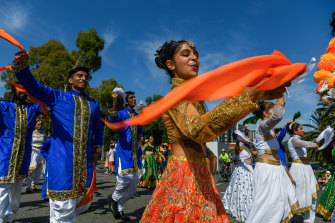 The Moomba Parade makes its way along Birdwood Avenue on Monday. Credit:Joe Armao

But once it got going, the parade on Monday, the first since 2020, was a riot of noise. And that was just the marchers.

Visually, the theme was loud and colourful, too. There were floats with giant popcorn pieces and books. People wore super-sized seagull, lyrebird, puppy, koala and even spider outfits. 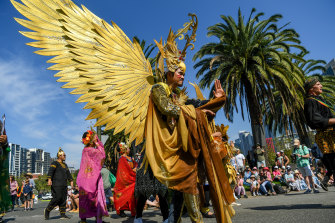 The biggest reaction from the crowd — claps, cheers and shouts of encouragement — was for the Lehenda Ukrainian Dance Company, who were smiling and step-perfect despite the shock of the Russian invasion of Ukraine, and their worry for loved ones.

Artistic director Melanie Moravski Dechnicz was so moved that tears streamed down her face.

“I feel very emotional, but so supported,” Ms Moravaki Dechnicz said. “It’s amazing to know that all these people are behind us, behind our country, behind our people. 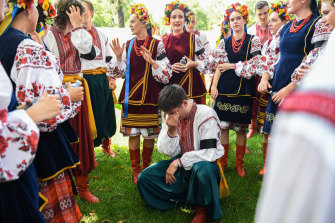 The Moomba Parade was an emotional experience for Lehenda Ukrainian Dance Company.Credit:Joe Armao

In the Children’s Cancer Foundation group, Diana Politis was happy to see her daughter Charlise Politis, 10, riding a scooter with her friend Luna Phillips, 5.

The girls grew close while being treated for leukemia at the Royal Children’s Hospital.

Ms Politis said Charlise has spent 150 days in hospital in the past eight months and it was “the most amazing thing” for her be out and about in the community. 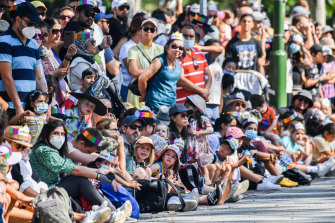 Wurundjeri man Daniel Ross, 36, brought his children Rylan, 7, Freya, 5, and Jarralee, 3, to be among the Indigenous group, the Wurundjeri-Woiwurring Aboriginal Cultural Heritage Corporation, that did a smoking ceremony and led the parade.

Ms Box’s older daughter Trixie, 8, was stoked to get to be princess for a day, wearing a pretty dress and waving to the crowd. 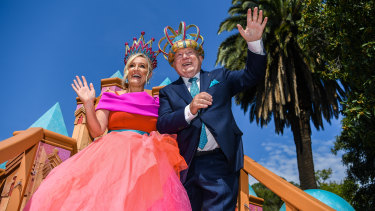 Moomba Monarchs Fifi Box and Peter Hitchener we ready to have a good time. Credit:Joe Armao

Ms Box, dressed in a vibrant orange, pink and red neoprene and tulle princess gown — albeit with sneakers on her feet for comfort was rather happy herself.

She said her was “all my Disney dreams come to fruition”.

Mr Hitchener said the crowds flocking to Moomba this year “shows we’re ready to have a good time”.