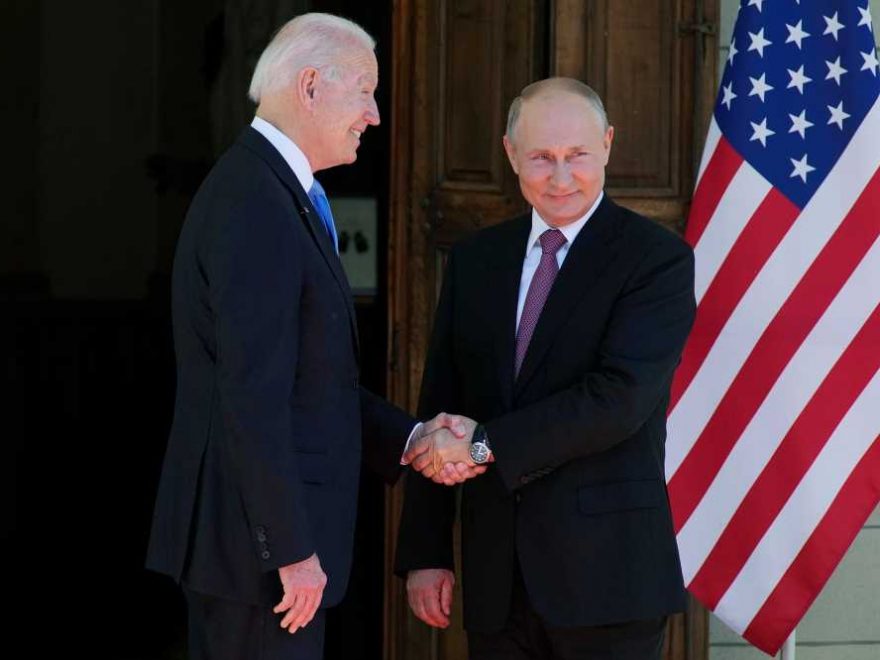 Graham accuses Biden of Putin ‘appeasement’ ahead of Geneva summit

‘We just want him home’: Parents of former Marine held in Russia speak out

Russian President Vladimir Putin and President Biden are meeting for their much anticipated summit Wednesday in Geneva, Switzerland — on the heels of provocative Russian war games near Hawaii hours earlier and crippling Russian-based cyberattacks on US industries in recent weeks.

The talks are expected to last 4-5 hours at the historic Villa de la Grange manor house, situated within a stately park near the shore of Lake Geneva.

Very little of the talks is expected to be public and Putin and Biden are expected to give solo press conferences afterward — reducing the risk of Biden falling into a PR trap laid by the ex-KGB agent, who has ruled Russia for two decades.

The summit is scheduled to feature two meetings: a smaller one between Biden and Putin, joined by translators, Secretary of State Tony Blinken and Foreign Minister Sergey Lavrov and then a larger group meeting featuring more officials from each side.

White House officials sought to lower expectations on Tuesday, telling reporters aboard Air Force One that they are “not expecting a big set of deliverables.” Still, Russian officials said they believe the summit may produce a joint statement — after US officials for weeks said Biden will seek to forge a new understanding with Putin that would allow for a more predictable US-Russia relationship.

The meeting closely follows the reported deployment of three F-22 raptors by US officials on Sunday in response to large Russian war games featuring ships, submarines and bomber aircraft about 300-500 miles off Hawaii.

The US jets did not intercept any Russian bombers because they didn’t get close enough to Hawaii during the maneuvers, which Russia called its largest Pacific exercise since the Cold War.

The war games were the latest in a series of Russian jabs at the US.

The Biden-Putin talks are expected to include discussion of recent cyberattacks against Colonial Pipeline, which caused US gas prices to spike as stations ran dry across the South, and JBS Foods, a major meat processor, by criminals suspected of living in Russia.

Lavrov said that Putin is prepared to flip the script on Biden if he brings up sensitive issues, such as human rights including the case of jailed opposition leader Alexei Navalny, who last year survived poisoning attempts. He said Putin was ready to advocate, in turn, for the “human rights” of Capitol rioters.

“We are following with interest the persecution of those persons who are accused of the riots on January 6 this year,” Lavrov said.

Biden in April offered Putin the summit during a call regarding US plans to expel diplomats and apply new sanctions as punishment for alleged Russian meddling in the 2020 election and the SolarWinds hack that impacted US government systems. Russia reciprocated by expelling US diplomats.

Biden has faced Republican criticism for already lightening his approach toward Putin on several occasions.

As a presidential candidate, Biden repeatedly attacked President Donald Trump for not punishing Putin over unconfirmed intelligence that Russia paid bounties to the Taliban to kill US troops in Afghanistan. But Biden has been quiet on the issue since US spy agencies concluded in April they don’t have high confidence in the claim.

And Biden appeared to blink in April on a decision to send warships to the Black Sea in response to a Russian troop buildup on the borders of Ukraine. The Pentagon ordered a U-turn by two US destroyers.

The Biden administration last month also decided to waive sanctions against the Nord Stream 2 gas pipeline linking Russia to Germany, which the Trump administration feared would make US allies economically dependent on Russia.