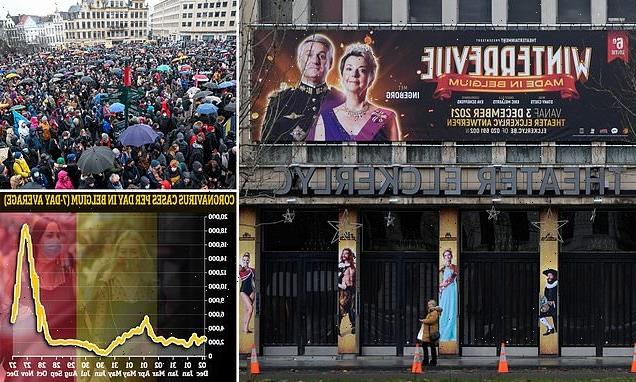 A Belgian court on Tuesday suspended the closure of concert halls, cinemas and other entertainment venues, a measure announced last week by Prime Minister Alexander De Croo to stem the spread of the Omicron Covid-19 variant.

Under new restrictions that took effect Sunday, movie houses, concert halls and art centres were ordered to shut their doors. Some stayed open in protest.

But the Council of State, Belgium’s highest administrative court, said the authorities have not demonstrated ‘in what way entertainment venues are particularly dangerous places for (people’s) health… in that they would spread coronavirus, to the extent necessary to order their closure.’ 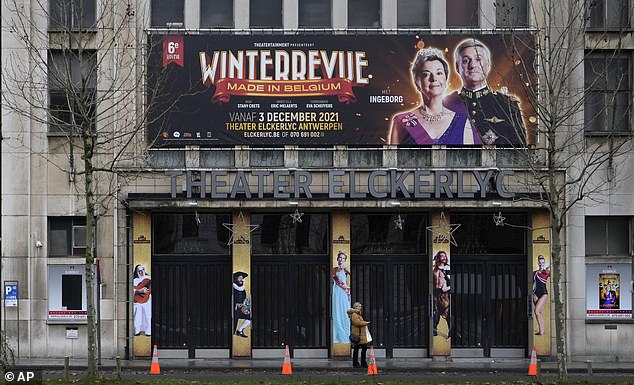 A Belgian court on Tuesday suspended the closure of concert halls, cinemas and other entertainment venues, a measure announced last week by Prime Minister Alexander De Croo to stem the spread of the Omicron Covid-19 variant. Pictured: A shuttered theatre in Antwerp

The government’s closure order was only announced last week and took effect from Sunday, with the court saying it was ‘disproportionate’.

It said in a ruling published on Tuesday that, even if the Omicron variant required further restrictions, the government needed to show why a given measure was needed on public health grounds. The court still needs to make a final ruling.

The order came despite the assessment of the scientific committee advising the government that going to such places poses no extra risk to public health.

It is not entirely clear what counts as a cultural venue, but it will not include cinemas and other indoor venues, such as for bowling, or night clubs.

The Council of State is an advisory body that has legal powers to overturn government decisions it considers unlawful. 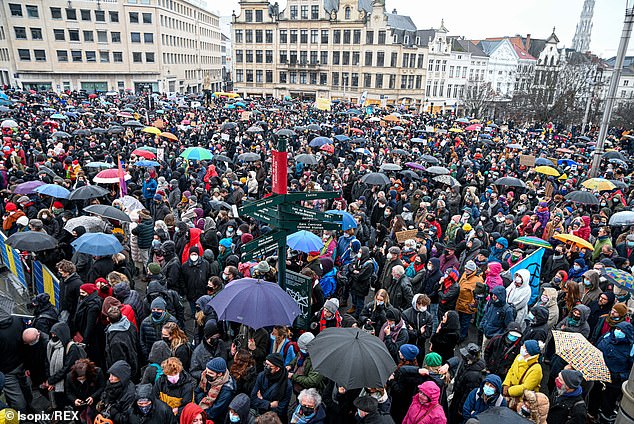 Thousands of Belgian performers, cinema operators, event organisers and others rallied on Sunday in protest at the closure of the country’s cultural life. Police in Brussels estimated that some 5,000 people took to the streets 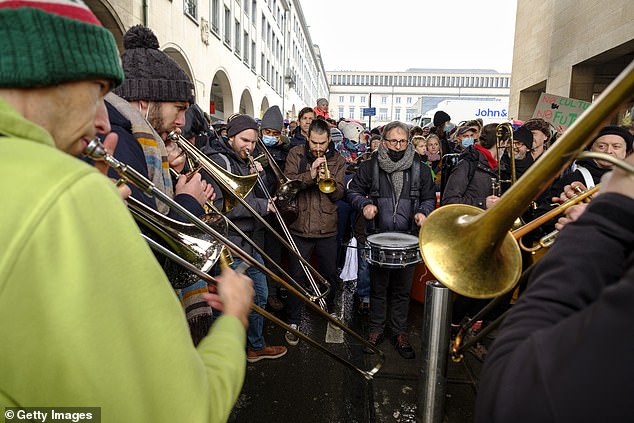 Thousands of people demonstrate in the ‘Mont des arts (Kunstberg) to show support for the culture industry against the government’s new coronavirus restrictions on December 26, 2021 in Brussels

Belgium, home to European Union institutions and the headquarters of NATO, has seen COVID-19 infections continually fall since a late November peak, but Omicron cases are rapidly rising, and now make up over half of all COVID-19 cases.

The suspension of the order came after representatives of Belgian actors, performers and cinema operators launched an appeal against the decision.

The FEAS umbrella association for the sector said the lockdown was baseless, unfair and disproportionate and it, along with several cultural and rights groups, appealed to Belgium’s Council of State, which ruled in their favour.

Thousands of Belgian performers, cinema operators, event organisers and others rallied on Sunday in protest at the closure of the country’s cultural life.

Police in Brussels estimated that some 5,000 people took to the streets. 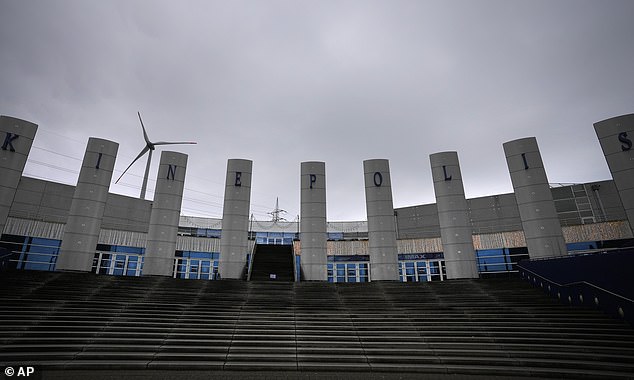 A closed sign hangs on the steps of a large cinema chain in Antwerp, Belgium on December 27 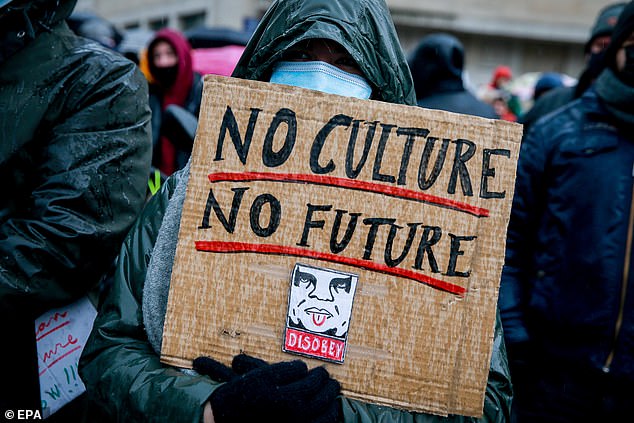 A protester attends a demonstration of the cultural sector against the closure of the sector following the new rules put into force against COVID-19, in Brussels, 26 December 2021

The authorities were accused of targeting the sector as bars and restaurants were allowed to keep trading.

Events like Christmas markets were allowed to continue, despite their boisterous and sometimes chaotic mulled wine parties, while restaurants and bars were allowed to stay open with some new restrictions.

Cinemas and other venues including bowling alleys and casinos were not included – but the authorities are facing similar challenges that could see more locations allowed to reopen in the coming days.

Several prominent theatres and cinemas had decided to remain open in defiance of the measure.

As with any indoor space, there is a risk of Covid-19 spreading inside cinemas and theatres. The risk has likely increased with the emergence of the Omicron variant, which is more contagious than previous variants.

Inside such venues, Covid can generally spread through two means: short-range interactions such as talking or sneezing, and through long-range movement of virus-carrying aerosols that can accumulate in space with poor ventilation.

Speaking to The Guardian in September, before Omicron emerged, Professor Tim Sharpe – head of architecture at the University of Strathclyde – said that infection risk depends on seating arrangements and audience density.

‘If you’re right next to somebody then clearly the risk is increased, both in immediate contact and droplet transmission,’ he said. ‘A lot will depend on the seating arrangements that places have. That will certainly be an issue.’ 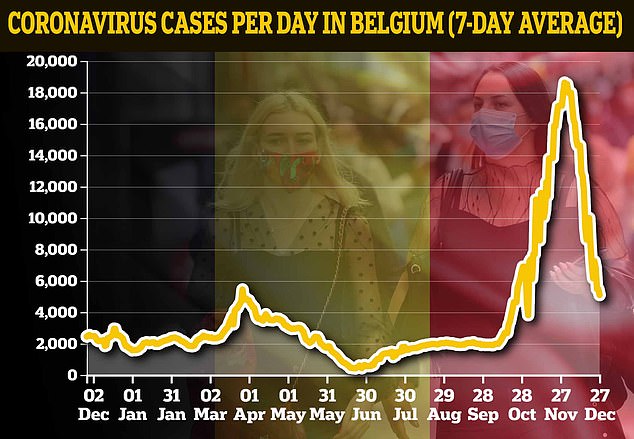 Belgium has seen COVID-19 infections continually fall since a late November peak, but Omicron cases are rapidly rising, and now make up over half of all COVID-19 cases 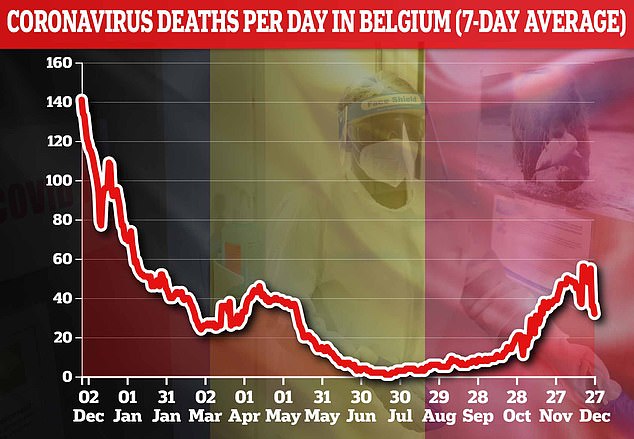 As omicron spreads ever more gloom around Europe ahead of New Year’s Eve, governments are moving at different speeds to contain the scourge, with some reimposing restrictions immediately and others hesitating to spoil the party again.

In Britain, where the highly contagious variant of the coronavirus has sent caseloads soaring to record highs, Health Secretary Sajid Javid said Monday no further restrictions will be introduced in England before the new year.

New daily infections in England are hovering around 100,000, and hospital admissions were up more than 70 percent on Christmas from a week earlier.

‘When we get into the new year, of course, we will see then if we do need to take any further measures, but nothing more until then, at least,’ Javid said.

Elsewhere in the United Kingdom, though, nightclubs have been ordered closed and limits on gatherings imposed in Scotland, Northern Ireland and Wales, leaving the country divided in its approach to the crisis.

The Netherlands, meanwhile, has already shut down all nonessential stores, restaurants and bars and extended the school holidays in what largely amounts to a new lockdown.

In France, Prime Minister Jean Castex announced a set of restrictions set to kick in next week, after New Year’s.

Among them: Big events will be limited to 2,000 people indoors and 5,000 outdoors; eating and drinking will be banned in theaters, at sports venues and on public transportation; and working from home will be mandatory at least three days a week for employees whose jobs make it possible.

Also, a bill will be voted on in France next month to create a vaccine pass that will allow only inoculated people to enter public places, including restaurants, bars and movie theaters.

France reported a record high of 179,807 new confirmed coronavirus cases in a 24-hour period on Tuesday, by far the highest daily number since the start of the pandemic.