Viewers tuning in to BBC1 on Christmas Day may feel a sense of deja vu – as its festive schedule is identical to last year.

The broadcaster’s flagship channel will air the same shows – including the Strictly special, Mrs Brown’s Boys and Call the Midwife – in the same order from teatime onwards.

Thankfully, almost all of the shows aired from then on December 25 will be brand new – but the same cannot be said about the rest of the festive schedule.

The BBC’s flagship channel will air the same shows on Christmas Day – including the Strictly special, Mrs Brown’s Boys and Call the Midwife – in the same order from teatime onwards

Yet again, BBC1 has relied on trusty favourites, Blankety Blank and Call the Midwife, to keep the nation entertained.

And, of course, it wouldn’t be Christmas Day TV without EastEnders and Mrs Brown’s Boys.

For those of us still up at 10.55pm, there is a repeat of The Vicar of Dibley to enjoy.

Broadcasters released their festive schedules yesterday and while there are a number of new offerings, many are far too familiar. 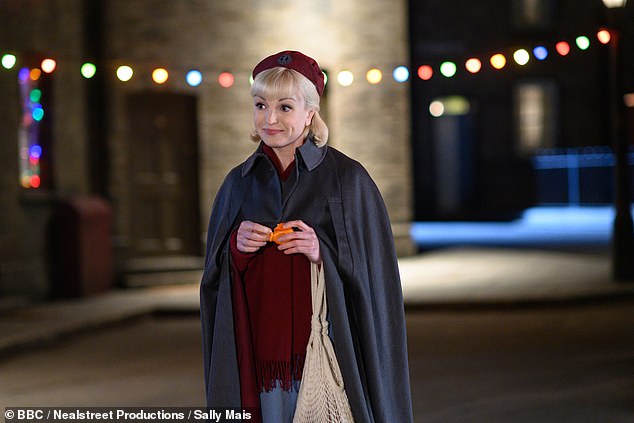 Nearly one third of BBC1 programmes airing from December 18 to 31 are repeats – with eight on both Christmas Day and Boxing Day.

Meanwhile, three quarters of the shows that will be aired on BBC2 will have been seen before. ITV’s figure is 34 per cent, while Channel 4 will be showing over 75 per cent of repeats.

As well as the soaps, ITV will be showing a Christmas special of The Larkins following the success of the rebooted series.

It is also airing plenty of game shows including Family Fortunes, In For A Penny and Catchphrase. Channel 4 will have a new Christmas animation, Terry Pratchett’s The Abominable Snow Baby, featuring the voices of Julie Walters, David Harewood and Hugh Dancy.

It will also air its Alternative Christmas Message which has previously been presented by John Bercow, the former Commons speaker, and actor Danny Dyer.

The classic shows on the channel’s lineup include The Two Ronnies, Morecambe and Wise and Dad’s Army. The films it will show over the festive period include Frozen, Paddington and Finding Dory. Meanwhile, ITV will air Santa Claus: The Movie, Love Actually, and Bond movie Spectre.