Five months after Indonesia belatedly confirmed its first coronavirus case on March 2, 3360 people have been infected in Bali and 48 people have died, with 47 new cases reported on Friday. 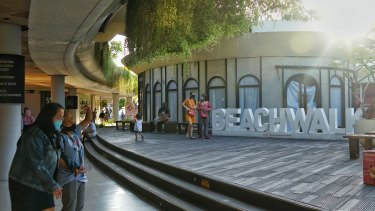 A trickle of visitors leaves little business at a quiet Bali mall.Credit:Amilia Rosa

The island had initially reported low case numbers but in recent weeks infections have risen.

With the tourism sector smashed by the pandemic – occupancy rates in hotels have dropped to an average of one to two per cent – the island has thrown open its doors for locals to return.

And the local government insists its plan to re-open to foreign tourists later this year, on September 11, remains on track.

Approximately 10 million domestic tourists visited the island in 2018, about 60 per cent of the island's total visitor numbers. 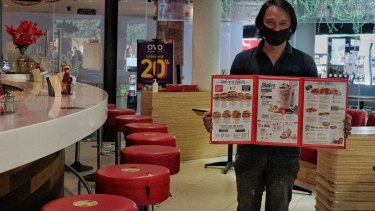 Australians were the single largest cohort of overseas visitors, with about 1.3 million people travelling to the island in 2019, while about 1.2 million visitors from China made the trip.

Now, Indonesian locals from across the country of approximately 270 million people will be able to return once more – provided they take a coronavirus PCR swab test or a rapid test before travelling, or on arrival, wear a face mask, wash their hands, maintain social distancing and provide their details to the Love Bali website or app.

Rizky Nuari, the regional manager for the Johnny Rockets restaurant in Seminyak, a beachside suburb of Denpasar, said the establishment had cut its staff numbers from 60 people to 15 and put plans to open three more restaurants on hold. 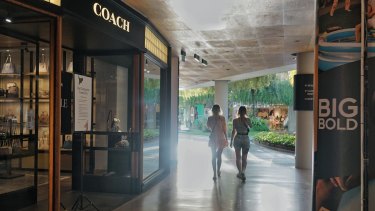 "Usually at this time of year, the high season, people have to wait in line for seats at lunch time. Now we are lucky if we have 10 customers a day. We need to at least double our sales compared to right now to continue to stay open. Hopefully the re-opening will bring more customers in," he said.

Made Merta, the general manager of the five star Inaya Putri Bali hotel in Nusa Dua, said that in 2019 the hotel's average occupancy rate was 86 per cent.

"Now in July we are down to just two per cent occupancy rate," he said, "we have operated with just a skeleton staff, we used to employ 475 workers, now we have only around 200 staff."

With COVID-19 protocols and certification in place, Made said, the hotel is offering a 50 per cent discount to tourists on its usual rates. 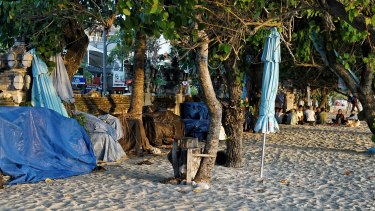 Many shops and businesses in and around Kuta beach are still closed. Credit:Amilia Rosa

Putu Astawa, the head of the Bali government's tourism department, estimated the loss of international tourists alone had cost the island economy 10 trillion Rupiah (about $950 million) per month.

"With the re-opening we have not set a target yet. We aim to get the trust of international visitors. We need to ensure those who will come are healthy tourists and that they stay healthy while holidaying in Bali," he said.

"We are doing this in stages in line with the new normal, and for September 11, [we hope] the central government can open access [to international tourists, who currently cannot travel to Indonesia]."

The Indonesian government is in talks with neighbouring countries such as the Philippines to establish "travel bubbles" that will allow limited tourism and travel. 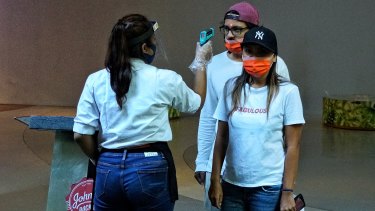 Australians, however, currently need permission from the federal government to leave the country and face a mandatory two weeks quarantine when they return on the limited number of international flights.

Bali's resumption of domestic tourism reflects what is happening more broadly across Indonesia as the country re-opens its economy despite infection numbers rising day-on-day.

As of Saturday, Indonesia had recorded 108,376 cases and 5131 deaths. And after averaging about 1600 new cases per day over the last month, in the last week Indonesia has recorded more than 2000 cases per day twice and just a fraction under the 2000 mark twice more. 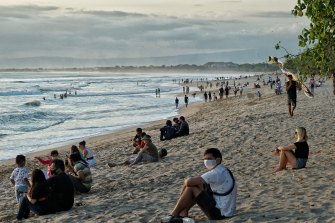 Kuta beach after its re-opening.Credit:Amilia Rosa

But in a country where as much as half the workforce is insecure work and earning a wage only day-to-day, the nightmarish challenge confronting the national government is balancing the need to protect its citizens' health with ensuring that the economy re-opens so that people can earn money to buy food and pay their rent.

The most important news, analysis and insights delivered to your inbox at the start and end of each day. Sign up to The Sydney Morning Herald’s newsletter here, to The Age’s newsletter here and Brisbane Times‘ here.