Infection control experts and doctors have called for an end to hotel quarantine in Australia, after a Victorian man tested positive for COVID-19 after being caught up in an outbreak that has sent Perth into a snap, three-day lockdown.

The resident of Melbourne’s eastern suburbs is suspected to have acquired coronavirus while he was in quarantine at Perth’s Mercure hotel – which was recently declared one of Western Australia’s riskiest and earmarked for closure as a quarantine facility because of its poor ventilation. 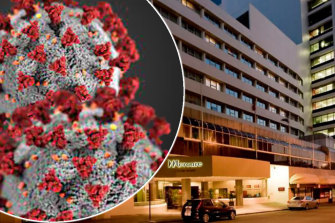 Guests at Perth’s Mercure Hotel caught coronavirus from an infected guest in an adjacent room.Credit:Nine

The case brought Victoria’s 55-day run of zero local transmission to an end, as the man’s positive test result is attributed to the state’s tally.

“There’s no bad luck in this. This is all bad management,” Australian Medical Association WA president Andrew Miller said on Friday. 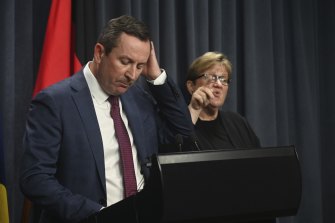 The virus spread among quarantining guests in separate rooms with a mother and her four-year-old daughter also contracting the virus while in the hotel.

The case of the woman and her daughter were detected on April 16 and later genomically linked to a COVID-positive husband and wife who arrived from India on April 10. Genomic sequencing is underway to confirm the source of the Victorian man’s infection.

Western Australian Premier Mark McGowan said the Victorian man left hotel quarantine on April 17 and then spent five days staying with a friend and her two children in the Perth suburb of Kardinya. Health authorities are assuming he was infectious while there. On Friday his friend also tested positive.

The man, who is in his 50s, has since been moved into hotel quarantine in Melbourne at his request, where he remains, according to an update from Victoria’s Chief Health Officer Brett Sutton.

“Four household and social contacts are associated with this case – the individual’s spouse, his two children, and a friend of one child,” Mr Sutton said.

Western Australia’s Chief Health Officer Andy Robertson recommended the Mercure Hotel no longer operate as a quarantine facility on April 14, about the same time the cross-corridor infections would have been occurring.

Documents released by the state government later revealed ventilation in the 1970s hotel had been identified on April 8 as the riskiest among WA’s 10 quarantine hotels. An engineer who inspected the facility found the corridors had no independent airflow, with oxygen supply leaking from the adjoining rooms.

“Given the degree of positive pressure, leakage likely between rooms and corridor,” a table summary read.

Mr McGowan said he received a report on April 16 that said ventilation issues at the Mercure were “manageable”.

“We have been doing our best to make our hotels fit-for-purpose,” he said. “We are trying to improve it, whilst we have these people in the hotels.”

“If we are going to have returning Australians this is the risk – our hotels were not built for this purpose, but that’s the only solution we have at this point in time.”

Amid the regular leaks from hotel quarantine – including similar recent cases of guest to guest transmission in NSW – there is growing urgency in calls to establish dedicated quarantine stations similar to Howards Springs in the Northern Territory as a safer form of housing returned travellers.

Leaks of the virus from hotel quarantine were responsible for Melbourne’s deadly second wave last year, and for the snap five-day lockdown in February.

Australian Medical Association national president Omar Khorshid said he had ongoing concerns about infection control in all of Australia’s quarantine hotels, with the probable exception of Howard Springs, a former workers’ camp a short distance from Darwin.

“Hotel quarantine was always a short-term measure and we’ve been calling for a while now for governments to consider longer-term measures,” Dr Khorshid said.

“Given that we are likely to need quarantine for at least the rest of this year and it could well be part of our reality for next year as well, the quicker that some sort of facilities could be stood up around the country, the better.”

He said the multi-storey design meant that there had to be more support staff on each level, increasing the risk that someone would be exposed to COVID-19.

Associate Professor Russo said every state should consider establishing a dedicated quarantine station “sooner rather than later” – suggesting they could be used for other pandemics in the future.

Emeritus Professor Sim said hotels had been used as a temporary measure “but we’ve now stretched out to a year and we need to be thinking of the medium and longer term”.

NSW health officials will enforce border checks for travellers arriving in Sydney from midnight on Friday. Everyone arriving after midnight must complete a declaration which confirms they have not attended a venue of concern.

Stay across the news you need to know related to the pandemic. Get it every Monday.