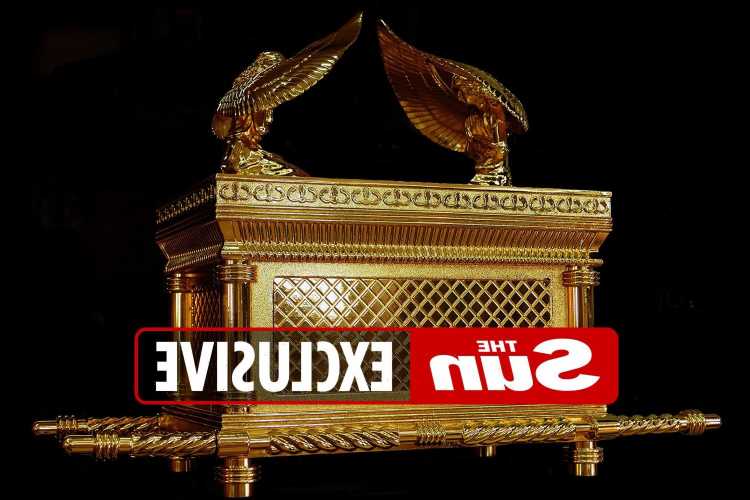 HUNTERS of the lost Ark of the Covenant claim the holy relic is being secretly guarded by a holy man In Africa after it was smuggled out of Israel.

The fabled artefact has been sought for centuries in a search made famous by the fictional 1981 Steven Spielberg film Raiders of the Lost Ark. 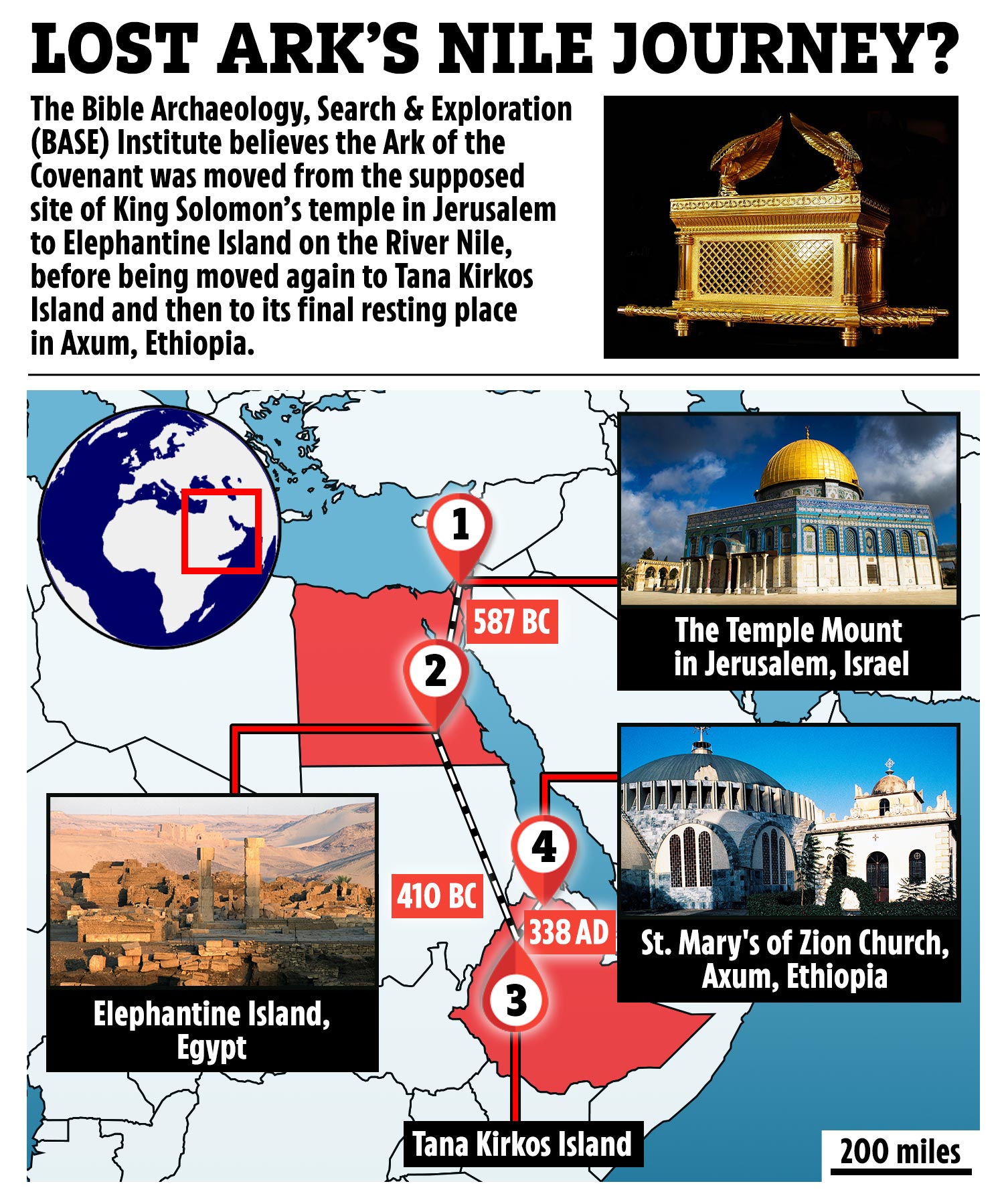 According to the Old Testament the Ark was a wooden box about four feet long, two feet high and two feet wide and covered inside out with gold.

It is crowned with two winged angels.

Inside are two stone tablets inscribed with the Ten Commandments which Moses received from God on Mount Sinai.

For this reason, treasure hunters and archaeologists have long been fascinated with finding the Lost Ark, which is believed to have vanished around 687 BC when the Babylonians destroyed Jerusalem.

Researchers at the Bible Archaeology, Search & Exploration (BASE) Institute, founded by NASA moonwalking astronaut James Irwin, have pieced together evidence from the Old Testament they say reveal the Ark was secretly spirited away from ancient Israel on a journey to Africa.

BASE’s Dr Bob Cornuke, an ex-crime scene investigator and member of an elite Swat team unit, who is now a real-life Indiana Jones hunting down relics of the Bible, told Sun Online: "I can make a solid case that the Ark is in Ethiopia today."

Dr Cornuke explained how the discovery came after 23 years of research which have involved studying extracts of the Bible and more than 20 trips to Ethiopia where it is believed to have been moved by fleeing Jews.

He said: "As crazy as it may sound, I believe the Ark may very well be hidden away today in a church called Saint Mary of Zion in Axum, in the highlands of Ethiopia.

"A logical trail can be made that connects the Ark going missing from the Temple during the reign of a wicked King named Manasseh in Judah.

"From there it went to Egypt and about 400 years prior to the birth of Christ the Ark was brought to Ethiopia."

Today he said it is worshiped by an Ethiopian sect and protected by a Guardian who is a monk who has sworn to protect it with his life.

"I believe the Ark may very well be hidden away today in a church called Saint Mary of Zion in Axum, in the highlands of Ethiopia." 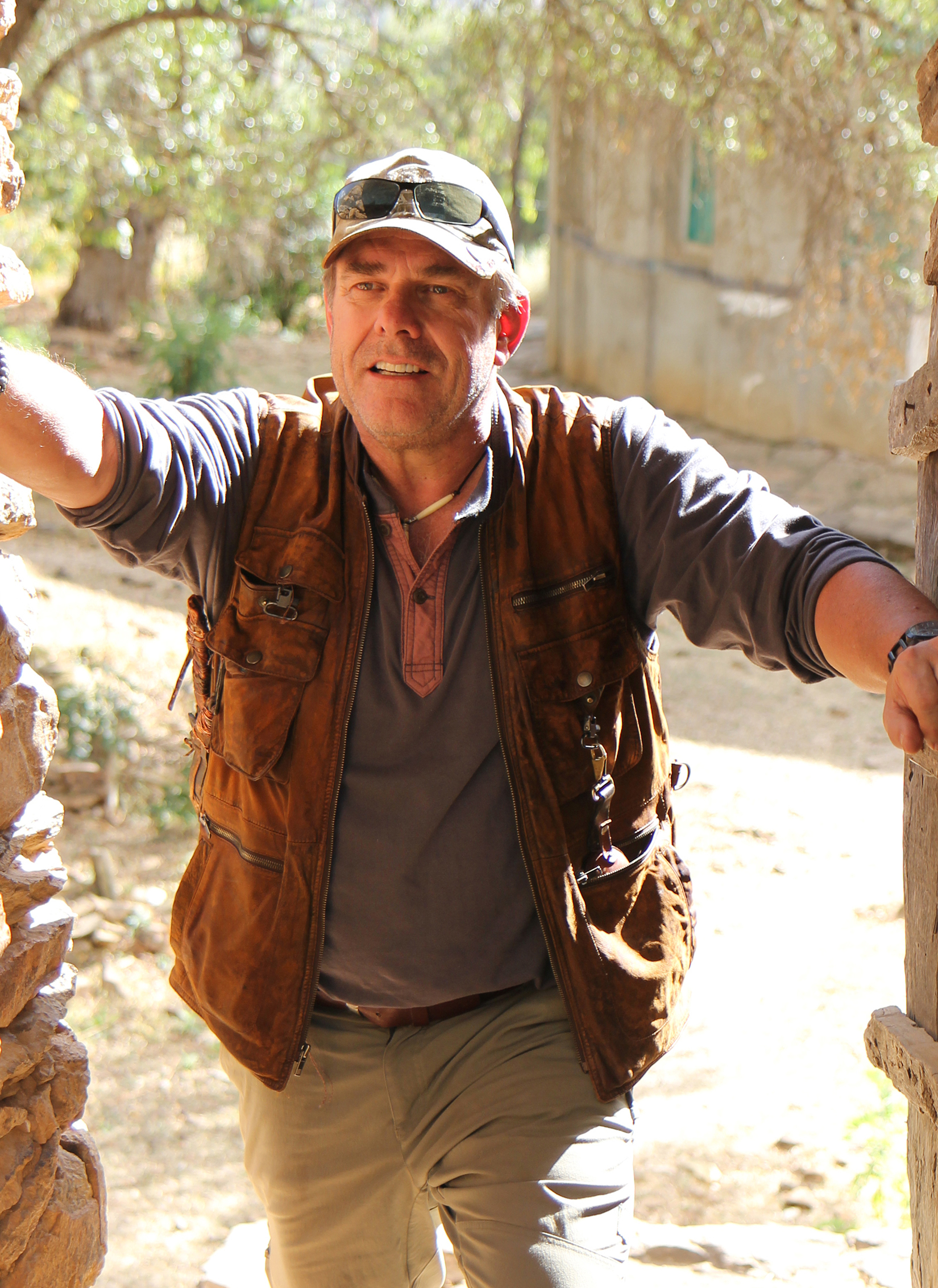 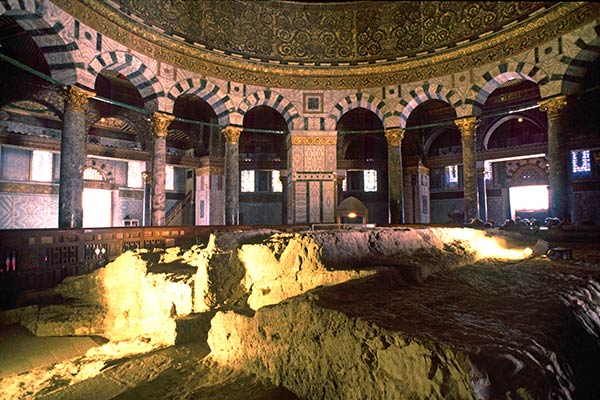 Monks even believe the Ark protected the country in 1935, when it was the Kingdom of Abyssinia, again Italian dictator Benito Mussolini's invading army.

Dr Cornuke said: "The Ark is believed by them to have massive powers that can even turn the tide of war which they have used during their battle with the Italians under Mussolini."

"The Guardian will never leave the small fenced in complex for the rest of his life, he talks to no one except on very special occurrences."

The route it took to Ethiopia began in around 687BC when King Manasseh took the throne of Judah, he said.

He drove a sect of Jews out of Israel and they took the Ark of the Covenant with them from its original resting place beneath the Temple Mount.

In Chronicles 35:3 it is said after his rule, the Ark was no longer in the temple.

Jews escaping persecution moved the Ark from King Solomon’s temple — located in today’s Temple Mount in Jerusalem — and moved it down the River Nile to a small colony on Elephantine Island.

BASE claims they found evidence of a temple built to the dimensions of Solomon's Temple that may have housed the Ark.

Ancient scrolls such as bundle of documents the Elephantine Papyri back this up, they say.

It appears the temple was destroyed in 410BC and the holy chest was then shipped down the Nile as it travelled to Ethiopia. 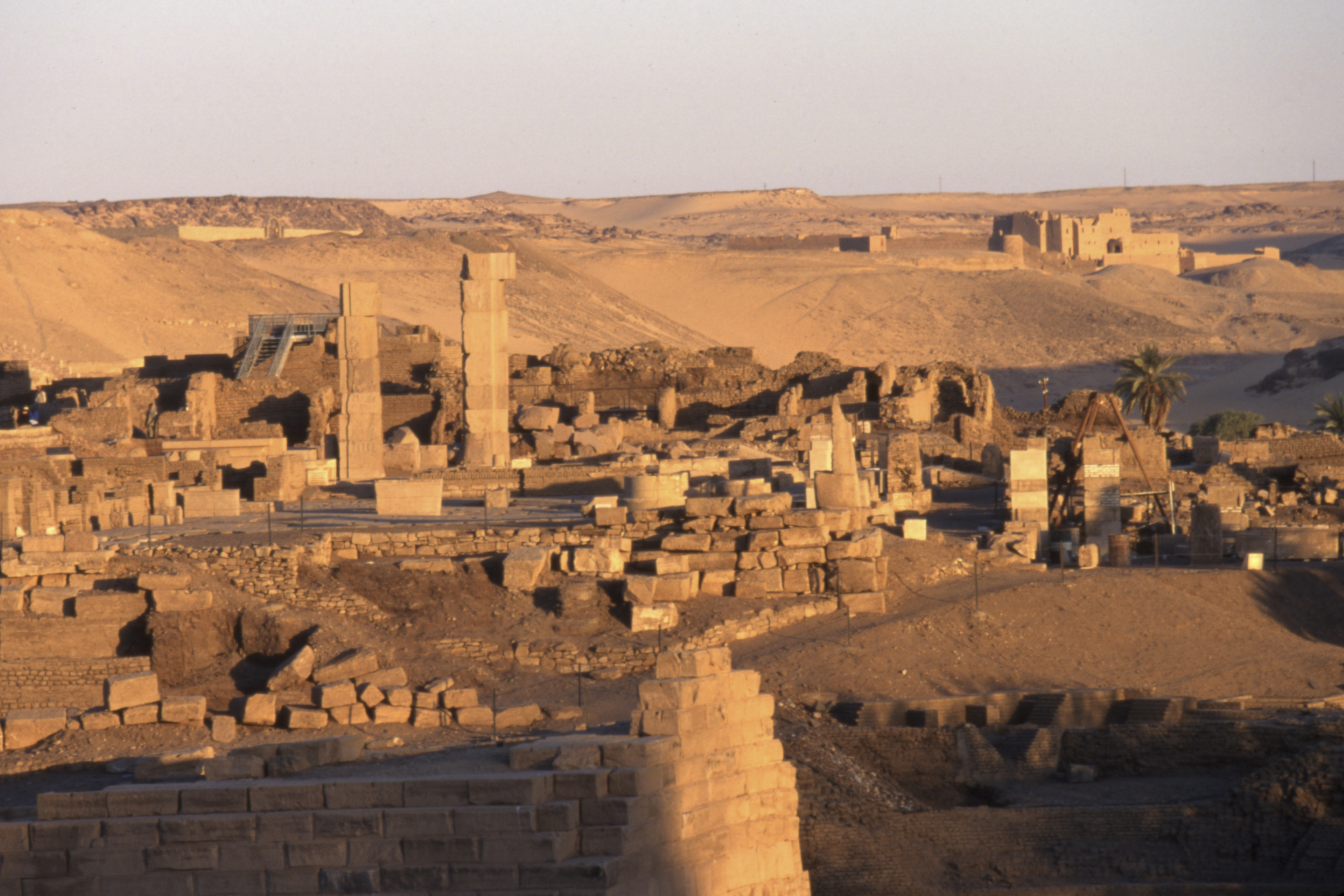 Along the way, the Ark was brought to the Tana Krikos island on Lake Tana, where there is evidence of Levitical style rituals.

Monks of Tana Kirkos escorted researchers to a high plateau where they showed the researchers several large, moss-covered stones.

They said had previously been used in sacrificial ceremonies when the Ark was on the island.

They also told them to the rock surface on which we stood had been the location of a tabernacle-like tent that had housed and protected the Ark.

‘GUARDIAN OF THE ARK’

It then appears to have been taken to Axum in around 338AD as Christianity took over Ethiopia — where it is housed at St Mary's of Zion Church in Axum.

Dr Cornuke and the BASE institute team claims to have spoken to a holyman at the church who was the Guardian and who spent his life inside a fenced-off area surrounding the church and claimed he would not leave the compound until he died.

Dr Cornuke said: "The Guardian will never leave the small fenced in complex for the rest of his life, he talks to no one except on very special occurrences.

"I am blessed to be afforded favour by the Guardian and speak to him when I go to the church.

"He will not give out much information about the ark as he is very shy or should I say super cautious of foreigners.

"When he dies the new guardian will be selected from one of his boy assistants that have by then matured to an older age." 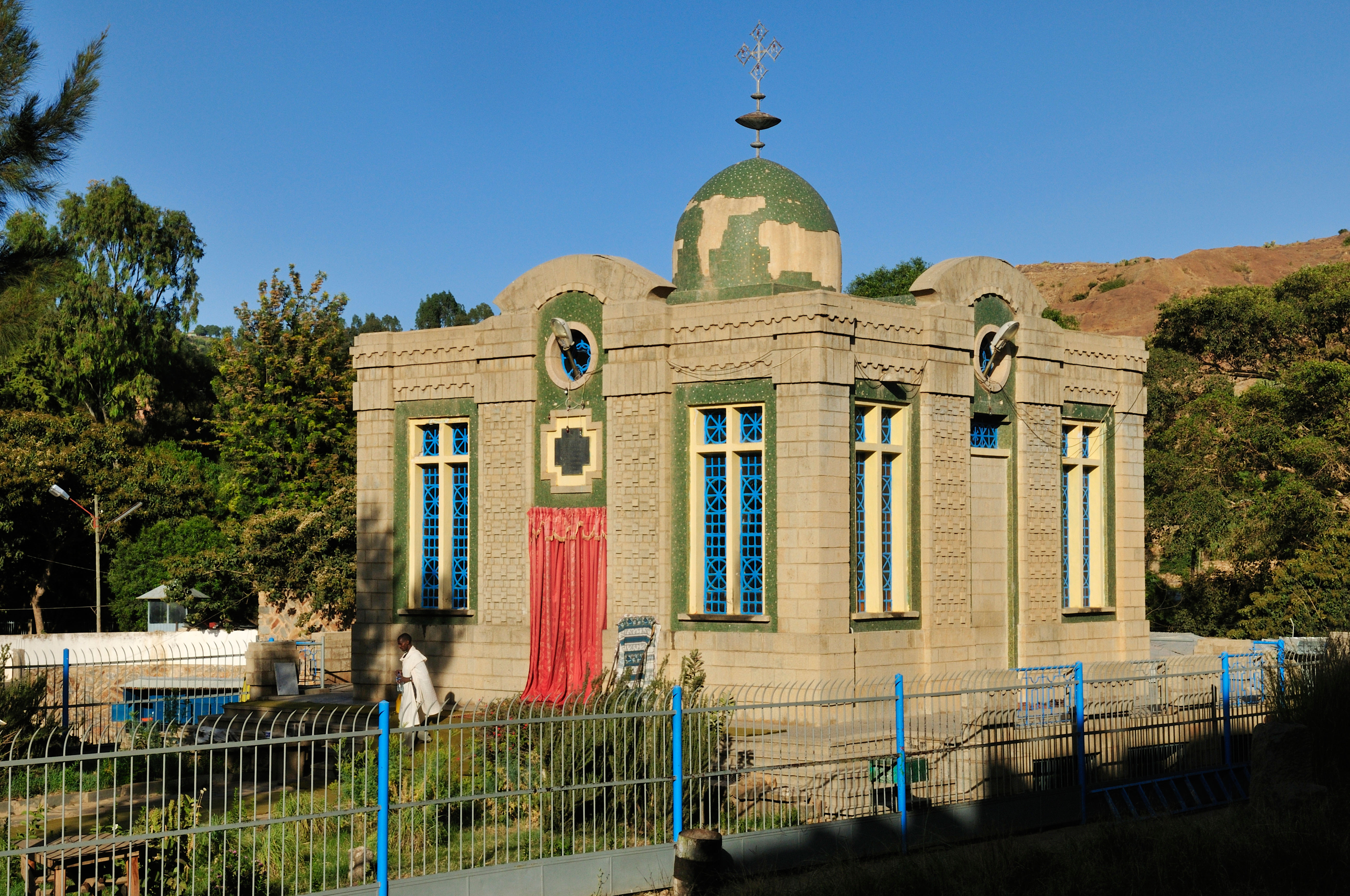 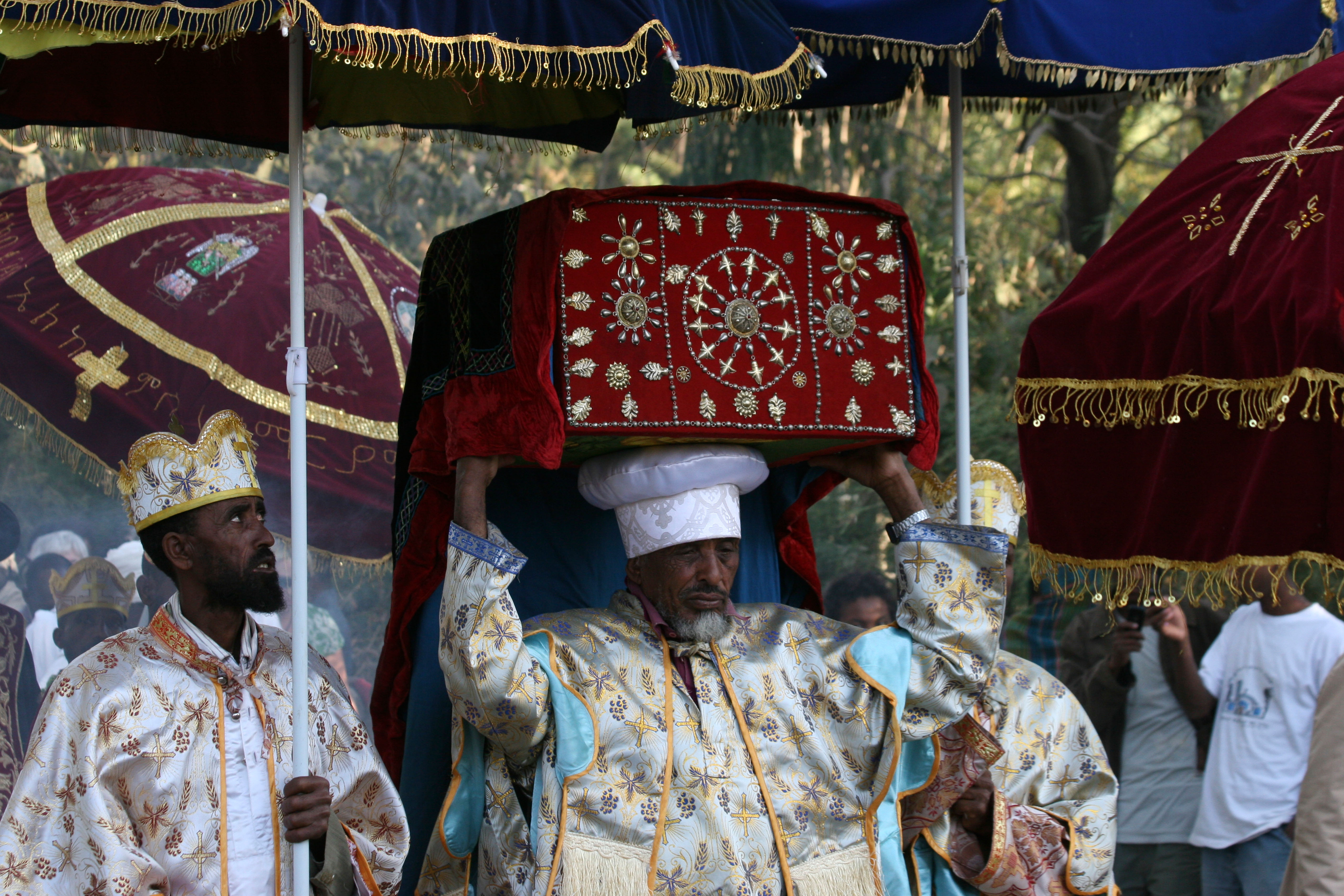 In February hundreds of people in Ethiopia died trying to defend the 'Ark of the Covenant' from looters after brutal fights erupted.

Fleeing civilians have said the aim of the attack, was to remove the ark to Addis Ababa, according to Martin Plaut, a senior research fellow at the Institute of Commonwealth Studies.

Worshippers rushed to protect the church where the Ark is said to be secured after clashes between soldiers and rebel militia near the site.

Dr Cornuke said: "Recently it was reported 800 people, many of which were my friends, were gunned down in the streets protecting the ark.

"The military forces did not get the ark. I plan on returning to Ethiopia soon to help the people in any way I can." 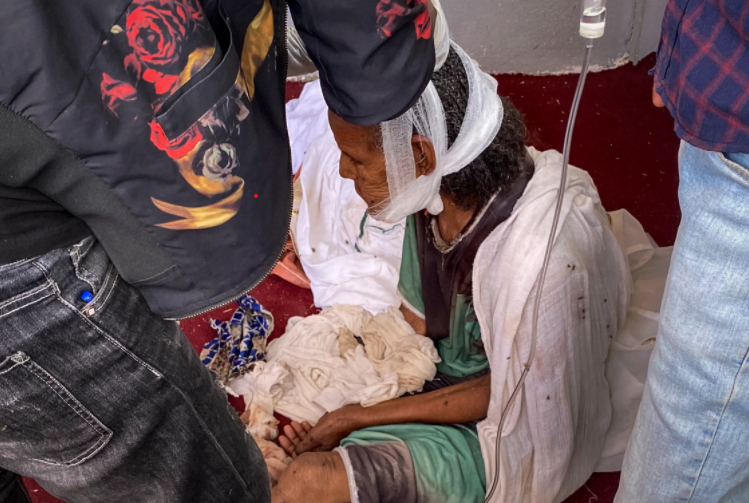