Asuncion: Argentina has asked for an explanation from Paraguay about the deaths in a police and military operation against a rebel group of two 11-year-old girls it said were Argentinian citizens.

The Paraguayan government had said a confrontation in the country's north with members of the Paraguayan People's Army (EPP) had left two "rebels" dead.

The EPP, said to have been trained by Colombian rebels and be active in marijuana-growing regions, has been accused of kidnappings and attacks in Paraguay over the past 10 years. 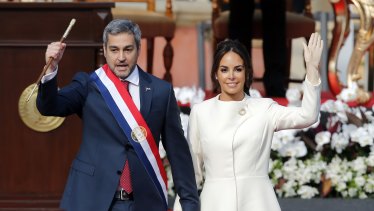 Paraguayan President Mario Abdo Benitez with his wife Silvana Lopez at his inauguration in Asuncion in 2018. His government is under pressure to explain the deaths of two girl “rebels” at the hands of security forces.Credit:AP

On Friday, Paraguay said those killed had been two teenage women, without giving their age or nationality.

The Argentinian Foreign Ministry said in a statement that it had consulted the country's national registry, after receiving a request from Paraguay, and established that the deceased were both 11 years old and Argentinian citizens.

Federico Gonzalez, an advisor to the Paraguayan presidency, told reporters that Paraguay's forensic report suggested the deceased were Paraguayan and older.

"The information we have is that these people were born in Paraguay and later transferred to Argentina, where they obtained these [identity] documents," said Gonzalez.

He denounced the girls' parents for "sending their children into battle with the security forces".

Argentina's Foreign Ministry said it was in touch with authorities in Paraguay, a landlocked South American nation with a population of around 7 million, to clarify the circumstances of the deaths.

Gonzales said the EPP camp raided by the security forces had been occupied by some 14 people now being sought in the surrounding area, known as Yby Yau, about 370 km north of capital Asuncion.

"Instead of offering forensic data and documentary evidence, the government of Mario Abdo rushed to bury the bodies of these girls before they had even been identified," the country's main opposition parties said in a statement.

Paraguay's Human Rights Coordinator said the operation "bears all the hallmarks of a fresh state crime."