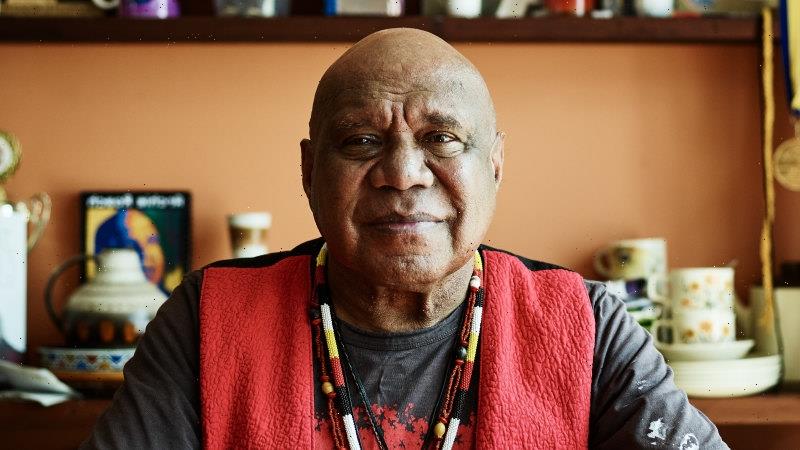 Warning: This story contains a photo of an Indigenous person who has died.

Tributes are flowing for prolific Aboriginal singer-songwriter Archie Roach, who is being lauded as a “truth-teller” and inspirational figure with a unique skill in bringing people together.

The 66-year-old Gunditjmara and Bundjalung elder died at Warrnambool Base Hospital in Victoria on Friday after a long illness. 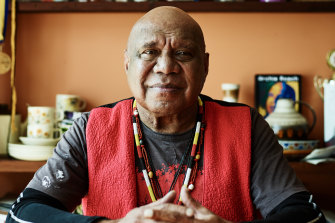 The singer was known for his song Took the Children Away, which details his experience as a member of the Stolen Generations. In 2020, Roach was inducted into the ARIA Hall of Fame and was named Victorian Australian of the Year.

Nira illim bulluk man Marcus Stewart, who is the co-chair of the First People’s Assembly of Victoria, said Roach’s lyrics could “transport us to another place”.

“He was a truth teller, an inspiration to so many and he will continue to be a national icon. Our sincere condolences to the Roach family and friends,” he said.

Roach’s sons, Amos and Eban Roach, gave permission for their father’s name and image to be used “so that his legacy will continue to inspire”. Roach is survived by Amos, Eban and foster children Kriss, Arthur and Terrence. Roach’s wife and musical partner, Ruby Hunter, died in 2010.

Victorian Deputy Premier Jacinta Allan said the premier had spoken to the Roach family but would not be drawn on whether the government had offered a state funeral.

“Archie Roach was a man who put a powerful voice to the terrible experiences of the Stolen Generation through his music,” Allan said on Sunday morning.

“He gave a powerful voice, but he was also a fighter for justice. 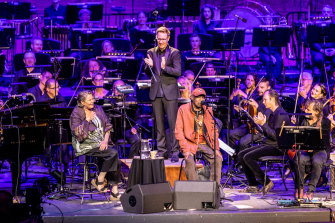 Archie Roach and the Melbourne Symphony Orchestra on stage at the Sidney Myer Music Bowl.Credit:Mark Gambino

“We will work out with his family during this sad time on any future arrangements that they may need to have to support them during this period.”

Having shared a friendship of 45 years, Briggs said the singer-songwriter created the concept of “truth-telling” in Victoria and had inspired many young Blak people.

“Through his voice and his ability to communicate across all of society, he brought the realities of the oppression of the past into the homes of all people,” she said.

“Through his voice, he revealed the personal and community trauma that arose from the oppression Victoria’s first people had encountered. And through this voice and amazing talent, he had the ability to bring people together rather than divide.”

During the gig, Roach had to stop playing Walking Into Doors several times because he was crying. Hunter spontaneously got onto the stage to help him finish the song.

“By the end of it, the entire venue was weeping. Never seen anything like it,” Serong said.

Roach spent much of the end of his life in the towns of Port Fairy and Killarney on Victoria’s far south-west coast and was beloved by the local community, Serong said. The late songwriter had become a favourite of the medical staff at Warrnambool’s hospital while receiving care.

“Our district has a dreadful history with First Nations people, but Archie made people proud, and I think he helped them to change their thinking,” Serong said.

“He was all about reconciling, learning and forgiving. Although he was famously humble, he understood that his legacy will be important, and so he helped people who were working to preserve that legacy.”

Uncle Jack Charles said he was in “a state of misery” following Roach’s death.

“But like Archie, I’m compelled to continue my journey until it’s time to dismount and take my leave as he did, with grace, humility, and acceptance,” he said on Facebook. 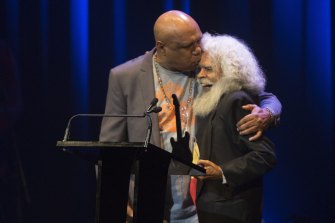 “Uncle Archie was a unique role model for his gentle approach to writing prolifically in these last months, much against the odds. I’m missing such a staunch comrade right now.”

Singer/songwriter Emma Donovan, who is of Noongar and Gumbaynggirr ancestry, said Roach had the power to change people’s minds “with every song”.

“Your integrity, your messages and perspectives in your songs will always carry me,” she said in a handwritten letter posted to Instagram.

“Seeing you sing was more than a performance. Thank you for the truth and singing what you lived, thank you for being so humble and so generous. Uncle, you’ll always be so special to me.”

Olympic gold medallist Cathy Freeman said she was saddened by the passing of “such a champion for First Nations people and all humanity”.

“I will remember (Uncle) Archie Roach as such a courageous storyteller and remarkable musician! You’ll never be forgotten,” she said on Twitter.

Prime Minister Anthony Albanese lauded Roach for his powerful music, which he said was drawn from “a well of trauma and pain, but it flowed with a beauty and a resonance that moved us all”.

Greens senator and DjabWurrung, Gunnai and Gunditjmara woman Lidia Thorpe said she was honoured that Roach and Hunter had performed at her 21st birthday party.

“Uncle Archie, thank you for validating the trauma felt in our communities since colonisation,” she said on Twitter.

“Your music brought us healing and peace. May our ancestors protect and guide you.”