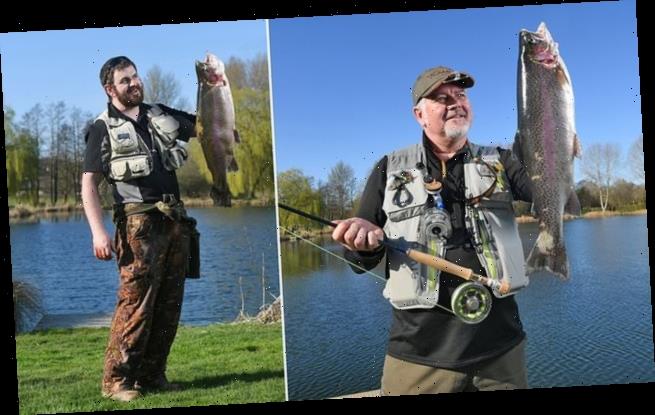 Even the FISH have got fat in lockdown! Anglers return to favourite spots after three months away to find well-fed trout are bigger than ever

Stunned anglers have returned to their favourite lakes to find extra large fish that have ballooned in weight over lockdown.

While fisheries have been closed to anglers since January, species normally caught for the table have still had to be fed.

This means that fish like trout have had three months of uninterrupted feeding without the risk of being hooked out. 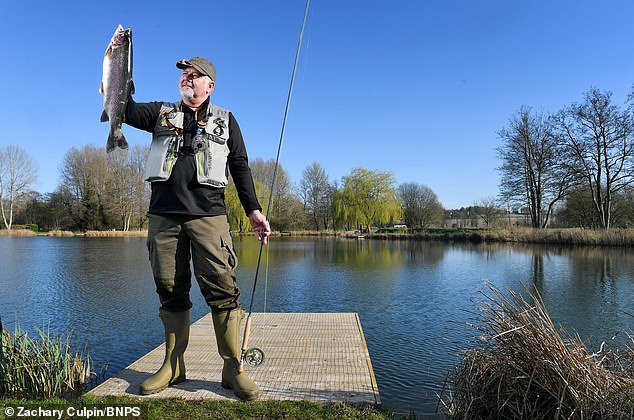 Anglers have been left stunned at the size of the fish in Dever Springs, in Hampshire, as they have grown to be extra large during lockdown. Pictured: Andy Banting with his Rainbow trout

Fishermen who returned to the banks yesterday had something of a red letter day with bumper catches that weighed up to 20lbs each.

Dever Springs, near Winchester in Hampshire, is known for its fine of rainbow and brown trout at the best of times.

But after a prolonged period of feeding, their specimens are now heavier than ever with some even reaching around 25lbs.

Fishery manager Stuart Barrett is hoping that the titanic trout will lure anglers back in their droves.

He has been feeding the fish himself with high protein and high fat pellets and has warned members to bring bigger landing nets with them when they come.

He said: ‘We are known for our big fish anyway as we have our own farm on site. 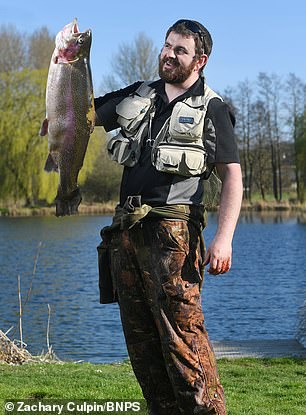 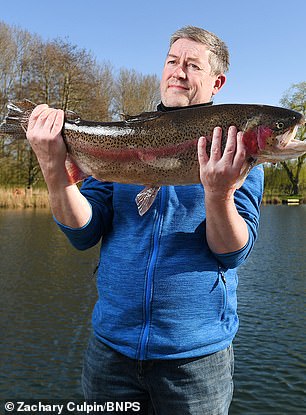 ‘However we have got some especially quick growing trout at the moment and not being fished has helped.

‘We have got through seven tonnes of fish food so far this year.

‘Obviously we have been closed since the start of January but we have still had to feed our fish like normal. The minute you stop feeding them they aren’t going to grow.

‘Normally the fish would have been moved from our stock ponds and into the main lake in January to be fished, so that is three more months of growth that they’ve had.

‘Even the smallest fish will be a few pounds heavier than usual and our biggest ones are now in the low to mid-20s.’

During the lockdown fishing was classed as exercise which meant anglers could continue, but not at organised venues.

Fisheries are classed as ‘outdoor sporting facilities’ and fell under the same category as golf courses and tennis courts.

But Stuart said: ‘You could say the lockdown could actually end up doing well for us.

‘Bigger fish definitely appeal to more anglers and once pictures get around on social media I am sure more will come.

‘But they will need to bring a bigger net, bigger scales, a very strong rod and they had better hold on tight.’