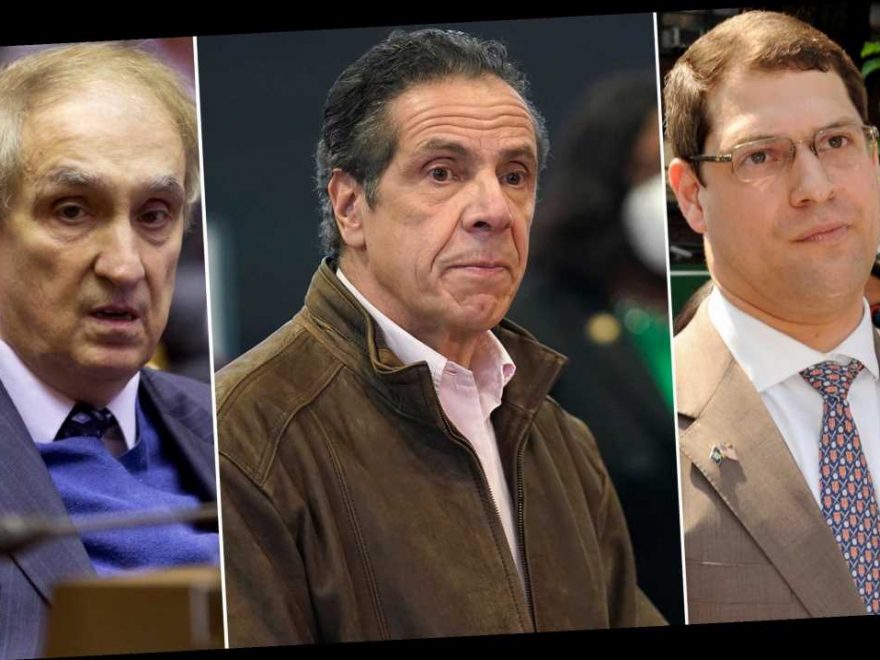 ALBANY — Governor Andrew Cuomo has been quick to call for the resignations of powerful Albany lawmakers accused of sexually harassing aides — including known harassers Vito Lopez, Micah Kellner and Dennis Gabryszak — but refuses to heed his own advice now that he’s the one facing multiple claims, critics argue.

The third-term Democratic governor faces three accusations of sexual harassment of his own within the last week, and has been called on by Democrats and Republicans alike to step down.

“Shouldn’t the governor, the most powerful official in New York, be held to at least the same ethical standard as an assembly member?” said John Kaehny, executive director of watchdog group Reinvent Albany.

“Not so long ago, Governor Cuomo demanded that two assemblymembers “immediately deny” allegation of sexual harassment or resign. Powerful words. Does the governor hold himself to the same standard?”

In 2012, Cuomo demanded that Brooklyn Assemblyman Vito Lopez resign from his post after two female aides accused him of groping, kissing and verbally abusing them.

“Sexual harassment at the workplace cannot be tolerated in any shape or form…these are serious allegations and if true, the governor believes he should resign,” Cuomo spokesman Josh Vlasto said at the time.

Cuomo even threatened to intervene in an investigation run by the state’s Joint Commission on Public Ethics, when it came to light that ex-Assembly Speaker Sheldon Silver — now sitting in federal prison under unrelated corruption charges — quietly approved a settlement between Lopez and aides.

Lopez, who died in 2015, ended up resigning in 2013 and was fined hundreds of thousands of dollars.

“Just like Trump, Cuomo is trying to create two systems of justice: one for everyone else, and a special one for himself. His abuse of women shows he’s unfit to hold public office. He must resign or be removed,” said Rita Pasarell, a co-founder of the Sexual Harassment Working Group and former staffer to Lopez.

The group was formed by ex-legislative staffers in Albany that filed their own claims of sexual harassment against their bosses.

Then in 2013, Cuomo also gave two Democratic assemblymen — Manhattan Democrat Micah Kellner and Dennis Gabryszak, of Buffalo — the choice to resign from their seats or “immediately deny” sexual harassment allegations waged against them by employees, according to Politico.

Cuomo also called on Silver to seriously consider expulsion for the pair, if they refused to step down.

Gabryszak stepped down in 2014, after seven women filed lawsuits in state and federal court — half of which were dismissed. A 2015 JCOPE report detailed a pattern of “sexually inappropriate behavior” between the former pol and female staffers. He was fined $125,000 in a settlement in 2019.

Kellner however, did not resign, but was instead sanctioned by the state Assembly and stripped of his committee chair posts and banned from having interns. He did not seat re-election in 2014.

The first accusation came from former economic development staffer Lindsey Boylan, now 36, who wrote in a Medium blog post on Feb. 24 that the governor asked her to play “strip poker” and also gave her an unwanted kiss.

Boylan had previously accused Cuomo of misconduct in December 2020, but did not provide detail at the time.

Then a former 25-year-old staffer — Charlotte Bennett — recounted a June 2020 incident to the New York Times over the weekend with the governor, which she described as leaving her with the impression that he “wanted to sleep with me.”

A third accuser, Anna Ruch, detailed a 2019 wedding to the Times where she met the governor and he made unwanted advances toward her, including grabbing her face and asking to kiss her.

Ruch, now 33, was a 2020 Biden campaign staffer and never worked for Cuomo.

Cuomo, meanwhile, issued a statement brushing off the allegations, saying he was sorry for making anyone uncomfortable and argued he is often “playful” and makes “jokes” at work.

He also previously denied allegations of physically touching aides, but those accusations are now subject to an independent probe by the office of State Attorney General Letitia James, who is expected to appoint and deputize a special prosecutor to investigate the claims.

Cuomo’s office did not immediately respond to a request for comment.