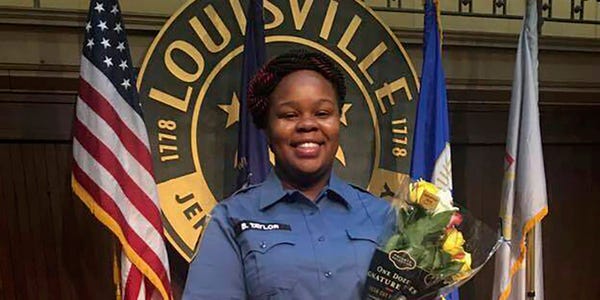 A grand jury indicted only one of the officers involved in the shooting death of Breonna Taylor.

On Wednesday, it was announced that Brett Hankinson was charged with three counts of first-degree wanton endangerment six months after Taylor was shot eight times in her own Louisville home during a botched drug raid.

The other two officers involved were not charged by the grand jury, and none of the officers were charged over killing Taylor.

According to the 1975 state statute, "a person is guilty of wanton endangerment in the first degree when, under circumstances manifesting extreme indifference to the value of human life, he wantonly engages in conduct which creates a substantial danger of death or serious physical injury to another person."

In other words, the charge is applied when "there was some type of uncalled for, unprovoked, or unjustifiable, or really unreasonable act, and it caused some danger," University of California, Los Angeles law professor Peter Johnson told Insider.

The Class D felony charge carries a maximum sentence of five years in prison and a fine of $10,000.

The charges say that Hankison "wantonly shot a gun" into a neighboring apartment, the Louisville Courier-Journal first reported.

Jody Armour, the Roy P. Crocker Professor of Law at the University of Southern California, told Insider that the charges are different from other charges like homicide for example because they assess the circumstances that were created by action not necessarily the end result.

"For example, homicide, it's reckless endangerment to drive up Figueroa here in LA at noon rush hour at 80 miles an hour, you know, 30 miles over the speed limit, say you don't hit anyone. So you're not, you're not criminally liable or civilly liable for any harm that you caused, you're not liable for murder or manslaughter or any other crime that's defined in terms of a forbidden result but what you did do was generated excessive and unjustifiable risk of that prohibited result. And so that is what you're really than being charged with, you know, creating excessive risk, not for causing a prohibited result," Armour said.

Johnson explained that this would be different from other charges like battery, or the unlawful application of force that causes bodily harm, or assault because there "was no intentional creation of fear or bodily harm to another person."

Armour explained that in Taylor's case, the charges against Hankison do not claim in any way that he broke any laws when he shot in her apartment. It was the shooting that impacted neighbors that garnered the charges and the liability.

The only charges in the Breonna Taylor case are for shooting into her neighbor's apartment, not for killing her