Washington: American pharmaceutical companies are planning to make a public pledge to not send any COVID-19 vaccine to the US Food and Drug Administration for review without extensive safety and efficacy data, according to people familiar with the effort.

The joint stance is seen as a bulwark against political pressure being applied on the FDA to release a vaccine as soon as possible. It is likely to be announced in a multi-company statement as soon as next week. The plans, which could still change, were described by people involved with the pledge on condition of anonymity.

The companies involved in the discussions include Pfizer, Moderna, Johnson & Johnson, GlaxoSmithKline, Sanofi and possibly others. All are developing vaccines for COVID-19. 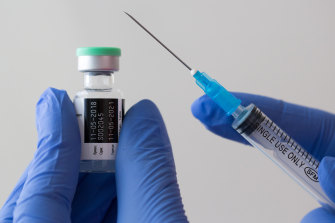 The drug industry has long relied on the FDA as a gold-standard seal of approval for its drugs and vaccines, assuring patients that the products are safe and effective. But in the middle of the pandemic, the agency has made several controversial decisions to allow emergency use of therapies without rock-solid evidence that they work.

A vaccine, which will need to be taken by millions of healthy people, requires significant uptake to be effective in batting down the virus in the US. One recent poll found that a majority of the public thought a vaccine approval would be driven by politics.

Health officials inside the Trump administration have said the process would be based entirely on science, and FDA Commissioner Stephen Hahn has said he would not participate if he thought a vaccine were being rubber-stamped. 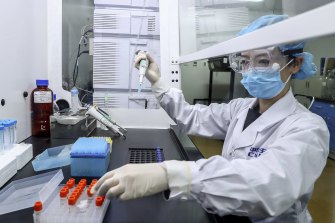 A technician tests samples of a potential COVID-19 vaccine at a production plant of SinoPharm in Beijing in April.Credit:Xinhua/AP

Last week, Britain said it was preparing to revise its laws so that any effective coronavirus vaccine could be used before it was fully licensed.

“I would like to assure the public that WHO will not endorse a vaccine that’s not effective and safe,” Dr Tedros Adhanom Ghebreyesus said.

Russia became the first country in the world to approve a COVID-19 vaccine in August after licensing a shot that had only been tested in about 40 people.

On Friday, Russian scientists published data suggesting their Sputnik V vaccine was safe and prompted an antibody response that would last "two years or more", but the results were limited and experts said the shot had not yet been proven to work. The vaccine is now being tested in about 40,000 people and is offered to key workers like doctors and teachers. Among those who have received it are one of President Vladimir Putin's daughters and Defence Minister Sergei Shoigu.

China has reportedly begun inoculating some high-risk groups with one of its experimental coronavirus vaccine while the large studies to prove its efficacy and safety are ongoing. In July, the head of China's Centre for Disease Control and Prevention announced that he had received the shot, although he did not specify whether that was done as part of a clinical trial.