A 23-year-old rising basketball star was stabbed to death after rushing to his brother’s aid when the pair were allegedly “ambushed” by five strangers during birthday celebrations in Melbourne.

On Monday, Melbourne Magistrates Court heard fresh details of the alleged murder of West Australian man Alier Riak and the attack on his brother Kuol Riak, 26, as one of the men charged over the Docklands incident applied for bail. 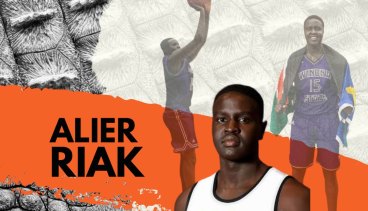 Alier Riak, who died after being stabbed in Docklands.Credit:Facebook

The court heard the 23-year-old had spent the evening in the Docklands area celebrating his birthday with his girlfriend, brothers and friends.

When the brothers left a music venue in the early hours of March 13, police say, they were set upon by five males on Bourke Street over a “perceived issue from earlier in the morning”.

Police allege that when Alier Riak attempted to reason with the unknown group, the accused men produced weapons and attacked the 23-year-old’s older brother.

“Upon the arrival of the police … members of the offending group continued to harass and antagonise the two victims as they lay in the middle of Bourke Street with serious injuries, prior to fleeing the scene.”

After the killing, friends and family of Alier Riak said he was a promising basketball player who had last month signed to play with the semi-professional team Darwin Salties in the Northern Territory.

He died in the Royal Melbourne Hospital soon after the attack.

His death came amid a weekend of extreme violence that included a 16-year-old boy being killed and a string of others being seriously injured in unrelated knife attacks. 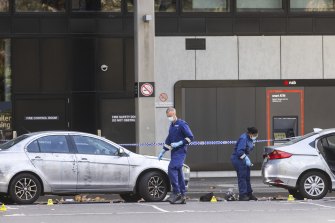 The scene of a fatal stabbing in Bourke Street.Credit:Paul Jeffers

Five men have since been charged over the attack on the Riak brothers. They include Aron Gebregorgis, 21, of Tarneit, and Teamrat Kassa, 19, of Derrimut, who have both been charged with murder.

Daniel Deng, 22, of Taylors Hill, and Emmanuel Lado, 21, of Wollert, have both been charged with offences including violent disorder and affray.

Another man, a 20-year-old from Epping, has been charged with affray and violent disorder and released on bail.

On Monday, Mr Lado fronted Melbourne Magistrates Court to apply for bail after being arrested and charged on Friday.

The court heard that when police attended his home to execute a search warrant, Mr Lado hid, but he was arrested a short time later.

Police said Mr Lado’s sister hid her brother’s mobile phone in her dressing gown before throwing it across the floor and into a plaster wall when confronted by detectives.

During Monday’s court hearing, police strongly opposed bail, labelling Mr Lado an unacceptable risk to the community. They said the police case was strong, with the incident captured on CCTV.