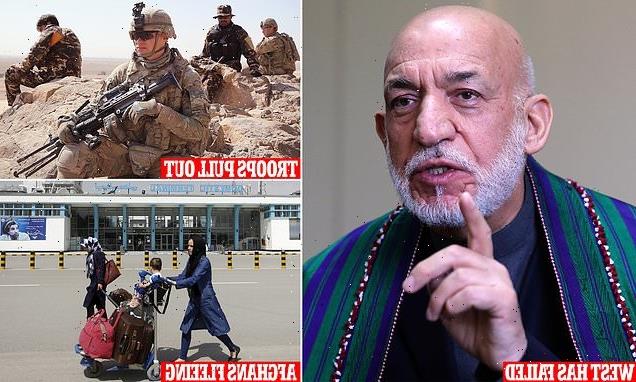 Afghanistan’s first post-invasion president angrily blasts US, Britain, Australia and allies for bringing 20 years of war to his country only to leave in defeat with the murderous Taliban poised to retake control

Former Afghani president Hamid Karzai has blasted the US, Britain, Australia and their allies for tearing up his country over 20 years for nothing.

He said the coalition came to his country to fight extremism and bring stability to his war-tortured nation and is leaving having failed at both.

Just weeks before the last US and NATO troops leave Afghanistan, ending their ‘forever war,’ Mr Karzai said extremism was at its ‘highest point’ and the departing troops were leaving behind a disaster.

‘The international community came here 20 years ago with this clear objective of fighting extremism and bringing stability… but extremism is at the highest point today. So they have failed,’ he said. 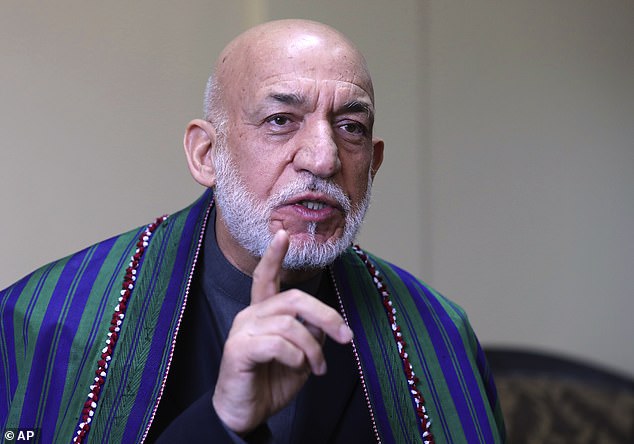 Former Afghani president Hamid Karzai has blasted the US, Britain, Australia and their allies for tearing up his country over 20 years for nothing

‘We recognize as Afghans all our failures, but what about the bigger forces and powers who came here for exactly that purpose?’ he said.

‘Where are they leaving us now?’ he asked and answered: ‘In total disgrace and disaster.’

Still, Mr Karzai, who had a conflicted relationship with the US during his 13-year rule, wanted the troops to leave, saying Afghans were united behind an overwhelming desire for peace and now needed to take responsibility for their future.

‘We will be better off without their military presence. I think we should defend our own country and look after our own lives,’ he said.

‘Their presence [has given us] what we have now… We don’t want to continue with this misery and indignity that we are facing. It is better for Afghanistan that they leave.’

Mr Karzai’s rule followed the overthrow of the Taliban in 2001 by a US-led coalition that invaded to hunt down and destroy the al-Qaida network and its leader, Osama bin Laden, blamed for the 9/11 attack. 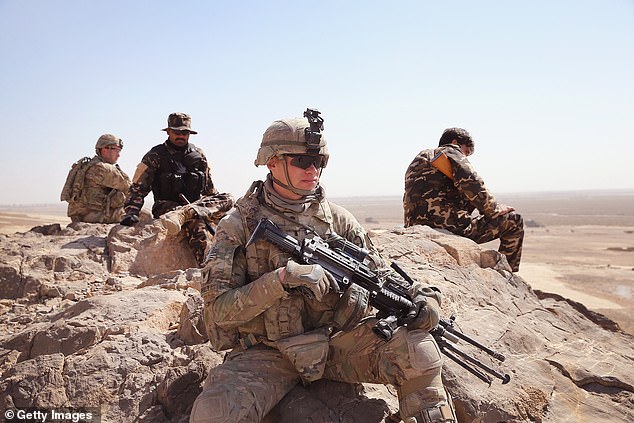 SPC Richard Reilly (centre) of Chicago, Illinois and other soldiers with the US Army’s 4th squadron 2d Cavalry Regiment patrol with police they and their comrades will leave for good in a few weeks President Joe Biden announced the final withdrawal of the remaining 2,500-3,500 troops, he said America was leaving having achieved its goals

During his presidency, women re-emerged, girls again attended school, a vibrant, young civil society emerged, new high-rise towers went up in the capital Kabul, and roads and infrastructure were built.

But it was also characterised by allegations of widespread corruption, a flourishing drug trade, and in its final years, relentless quarrels with Washington that continue even until today.

‘The [US and NATO military] campaign was not against extremism or terrorism, the campaign was more against Afghan villages and hopes; putting Afghan people in prisons, creating prisons in our own country… and bombing all villages. That was very wrong,’ he said.

In April, when President Joe Biden announced the final withdrawal of the remaining 2,500-3,500 troops, he said America was leaving having achieved its goals.

He claimed al-Qaida had been greatly diminished and bin Laden was dead, so America no longer needed boots on the ground to fight the terrorist threats that might emanate from Afghanistan.

Still, the US’s attempts to bring about a political end to the decades of war have been elusive. 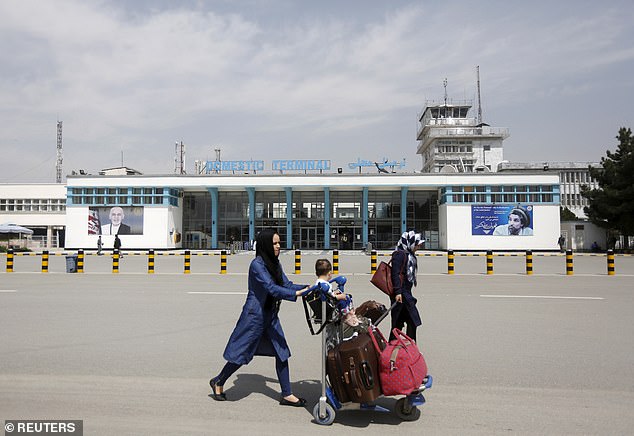 Afghan passengers walk in front of Hamid Karzai International Airport in Kabul, Afghanistan, named after the former president – which they are using to leave the country in droves 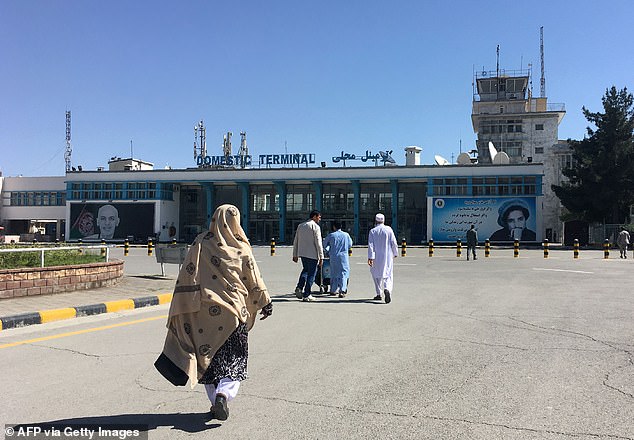 Afghans said they were frustrated by relentless corruption, marauding criminal gangs — some linked to the powerful warlords in Kabul — and worsening insecurity. Few see a future that is not violent

It signed a deal with the Taliban in February 2020 to withdraw its troops in exchange for a Taliban promise to denounce terrorist groups and keep Afghanistan from again being a staging arena for attacks on the US.

But there is little evidence the Taliban are fulfilling their part of the bargain and the UN claims the Taliban and al-Qaida are still linked.

The architect of the US deal and current American peace envoy Zalmay Khalilzad said some progress had been made, but without offering any details.

Mr Karzai had harsh words and uncompromising criticism of US war tactics over the past two decades in Afghanistan.

Yet he became a linchpin of sorts in a joint effort being launched by the US and Britain to get a quarrelsome Afghan leadership in Kabul united enough to talk peace with the Taliban.

The insurgent group has shown little interest in negotiating and instead has stepped up its assaults on government positions. 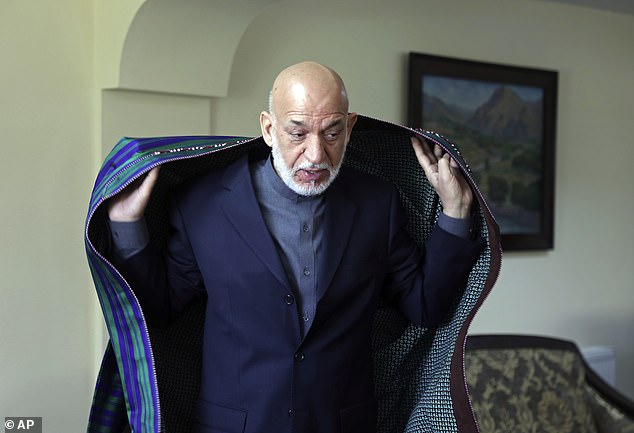 Mr Karzai had a message for both sides in the conflict: ‘The two Afghan sides, none of them should be fighting.’

The Taliban have made considerable strides since the May 1 start of the US and NATO withdrawal.

They have overrun dozens of districts, often negotiating their surrender from Afghan national security forces.

But in many instances the fighting has been intense. Just last week a brutal assault by the Taliban in northern Faryab province killed 22 of Afghanistan’s elite commandos, led by a local hero Colonel Sohrab Azimi, who was also killed and widely mourned.

‘The desire of the Afghan people, overwhelmingly, all over the country is for peace,’ Karzai said.

Despite being out of power since 2014, he has lost little of his political influence and is most often at the center of the country’s political machinations.

Diplomats, Western officials, generals, tribal elders and politicians on all parts of Afghanistan’s political spectrum regularly beat a path to Mr Karzai’s door in the heart of the Afghan capital.

As the final military withdrawal is already more than 50 per cent complete, the need for a political settlement or even a visible path to an eventual settlement would seem to be taking on greater urgency, even as Afghans by the thousands are seeking an exit.

Afghans said they were frustrated by relentless corruption, marauding criminal gangs — some linked to the powerful warlords in Kabul — and worsening insecurity. Few see a future that is not violent. 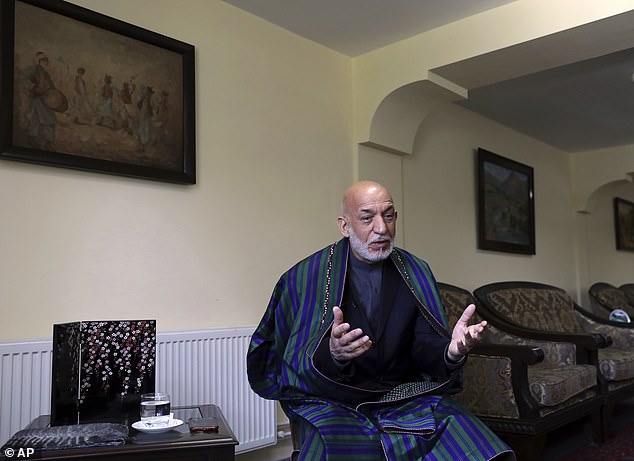 During his presidency, women re-emerged, girls again attended school, a vibrant, young civil society emerged, new high-rise towers went up in the capital Kabul, and roads and infrastructure were built

Mr Karzai had a message for both sides in the conflict: ‘The two Afghan sides, none of them should be fighting.’

While accusing both Pakistan, where the Taliban leadership is headquartered, and the US of stoking the fighting, Mr Karzai said it was up to Afghans to end decades of war.

To the warring sides in Afghanistan, Mr Karzai said: ‘I’m very emphatic and clear about this, both sides should think of the lives of the Afghan people and the property… fighting is destruction.’

‘The only answer is Afghans getting together… We must recognize that this is our country and we must stop killing each other.’