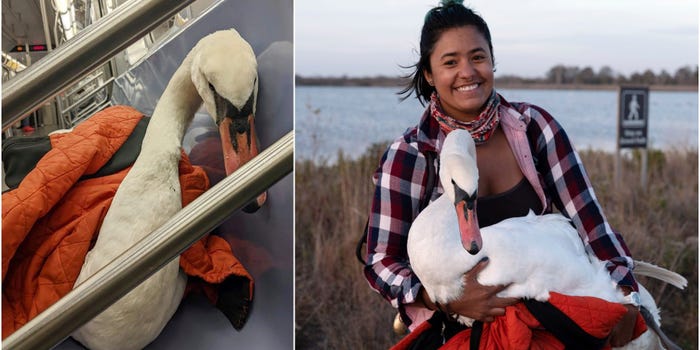 A cyclist celebrating her 30th birthday saved a sick swan's life with the help of a group of strangers in New York City that brought the animal to safety through multiple forms of transportation.

Ariel Cordova-Rojas was celebrating her birthday at the Jamaica Bay Wildlife Refuge on November 5 when she spotted a swan sitting alone in the grass.

She soon realized the swan couldn't walk or fly and decided to take action to help save it, the New York Times reported.

Cordova-Rojas picked up the 17-pound bird and wrapped it in her jacket before walking a mile to the refuge's entrance, where a group of people with a car agreed to drive her, the bird, and her bike to a nearby subway station.

While on the train, Cordova-Rojas put the swan on a bench while she stood with her bike.

They rode the subway train at least 10 stops before arriving at Nostrand Avenue in Brooklyn, where they were met by an employee of the Wild Bird Fund, a wildlife rehabilitation center based on New York's Upper West Side.

The rehabilitation center discovered the swan was experiencing lead toxicity and a bacterial or fungal infection and is now recovering at their clinic, according to the New York Daily News.

"She looks pretty good but she doesn't want to move much," Rita McMahon, director of the Wild Bird Fund, told the Daily News. "She has a nice big cage, and she has a buddy, another swan to keep her company."

Cordova-Rojas told the Associate Press that she was thankful so many people jumped in to help her out.

"I think it just shows the immense compassion of New Yorkers. People always think that we are rude and heartless, but we are just busy and have places to go, so we move fast," she said. "Even though we live in a concrete jungle, we are surrounded by nature and wildlife if you just take a second to look around. The wildlife are just as much New Yorkers as we are, and it is our duty to keep each other safe."