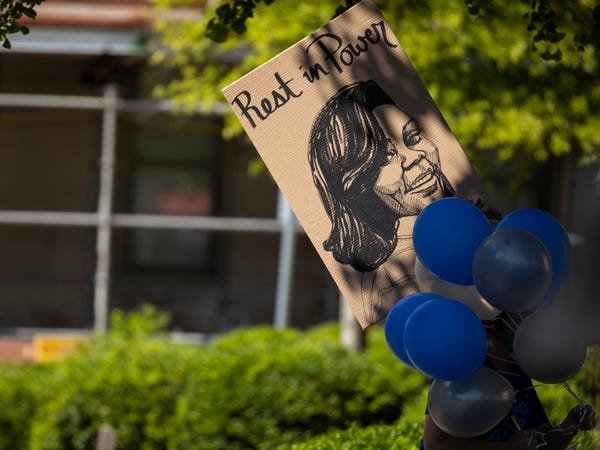 A police sergeant involved in the shooting death of 26-year-old Breonna Taylor sent an email to more than 1,000 of his fellow officers on Tuesday, calling protesters "thugs" and warning police that "your civil rights mean nothing."

Louisville Metro Police Department Sgt. Jonathan Mattingly, along with Det. Bret Hankinson and Det. Myles Cosgrove, executed a no-knock search warrant at Taylor's home on March 19, firing more than 20 rounds into her apartment. Mattingly and Cosgrove have since been placed on administrative leave. In June, Hankinson was fired by Louisville Chief of Police Robert Schroeder, who said Hankinson "displayed extreme indifference to the value of human life."

Kent Wicker, Mattingly's lawyer, confirmed on Tuesday that his client was the author of the lengthy message. The email was first shared on Twitter by Vice News's Roberto Aram Ferdman.

In the email, Mattingly tells his fellow associates to keep their "heads up" while the city waits for a grand jury's decision on whether to criminally charge the three officers.

"I'm not here to tell you that you signed up to help this community and to keep your head up. I'm here to tell you I'm sorry you have to go through this," Mattingly wrote. "I'm sorry your families have to go through this. I'm sorry the Mayor, [Louisville Chief of Public Services] Amy Hess, and Chief Conrad failed all of us in epic proportions for their own gain and to cover their asses."

Mattingly went on to call people involved in protests over the Taylor case "thugs."

"You DO NOT DESERVE to be in this position. The position that allows thugs to get in your face and yell, curse, and degrade you. Throw bricks, bottles, and urine on you and expect you to do nothing," he wrote. "It goes against EVERYTHING we were all taught in the academy. The position that if you make a mistake during one of the most stressful times in your career, the department and FBI (who aren't cops and would piss their pants if they had to hold the line) go after you for civil rights violations."

Mattingly also accused city officials of being "scared to hold the line."

"It's sad how the good guys are demonized and the criminals are canonized," he continued.

In a press conference on Tuesday morning, Police Chief Schroeder, who announced he would be retiring earlier this month, said it was  "premature" to make a statement on Mattingly's email. A spokesperson for the LMPD told the Courier-Journal it was aware of the email "and the matter is under review."

Mattingly's lawyer defended his client, telling the Louisville Courier-Journal that Mattingly was "expressing his support for them and their work in these difficult times."

Both the Louisville police and the mayor issued state of emergency warnings this week in an effort to get ahead of the potential protests following the grand jury's decision.