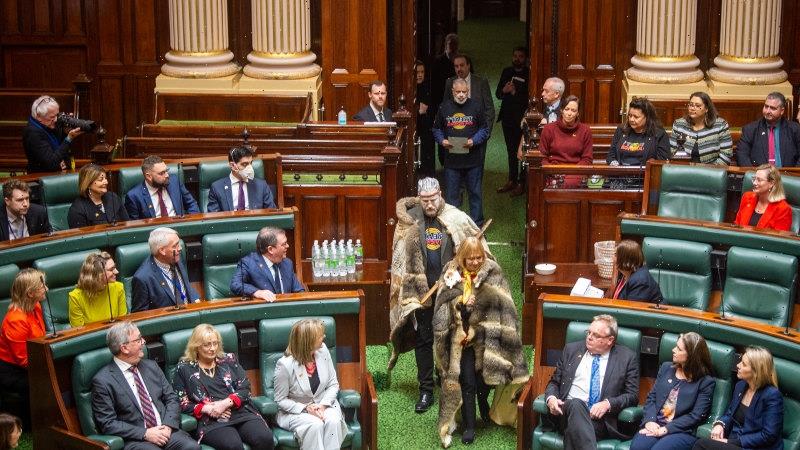 In 1835, John Batman sailed from Tasmania to Port Phillip, where he famously declared, “This will be the place for a village.” In what became known as the Batman Treaty, he also persuaded a group of local Indigenous leaders to sell him 240,000 hectares of prime farming land in exchange for a smattering of goods that included blankets, tomahawks, scissors, handkerchiefs and flour.

The treaty was soon annulled by Governor Richard Bourke of NSW, who declared the British Crown – as sole “owners” of Australia – the only entity that could sell or distribute land. The treaty has also been widely discredited by historians, who rightly point out it is inconceivable that the Indigenous leaders Batman negotiated with would have fully understood the European idea of land ownership and legal contracts. 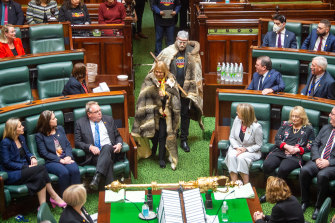 Co-chairs of the First Peoples’ Assembly Aunty Geraldine Atkinson and Marcus Stewart are introduced to parliament this week.Credit:Justin McManus

Almost 200 years later, while there have been many negotiations over the ownership of land since the Land Rights Act in 1976 and the High Court’s Mabo decision, no formal treaty has ever been negotiated between a First Nations people and an Australian government at any level. We are the only nation in the Commonwealth to never broker such a deal.

That is why passage of a bill to establish a Treaty Authority by the Victorian parliament’s lower house on Thursday was such a historic moment not just for the state, but for the nation. Under the bill, still to go to the upper house, the new authority, composed entirely of First Nations people, would be an independent body responsible for facilitating negotiations and resolving disputes between the government and First Nations people on a treaty.

Victoria is the only jurisdiction in Australia that has committed the resources and legislative framework to begin such negotiations. That process, along with truth-telling which in Victoria is being facilitated by the Yoorrook Justice Commission, were both advocated by the 2017 Uluru Statement from the Heart.

Marcus Stewart, the co-chair of the First Peoples’ Assembly – the body elected by Indigenous Victorians to help bring the Treaty Authority to life – said the process would be guided by the principles of self-determination and would demonstrate the state government’s willingness to relinquish some of its power and meet First Nations people on neutral territory to begin to right the wrongs of the often violent dispossession by British settlers.

That goes to heart of this process. When Batman stood on the banks of what many believe was Merri Creek, in Northcote, where he supposedly convinced a group of local Indigenous leaders to sign a document handing over the land they had lived on for tens of thousands of years, it was in no way a transaction involving parties with equal power or appreciation of what was taking place.

Even worse were the colonial authorities, firm in their erroneous belief that Australia before white colonisation was “terra nullius”, who did not give even as much respect as Batman did to the rights of Indigenous leaders.

A treaty holds out the prospect of redressing in some way that power imbalance by being an agreement between two fully informed and consenting parties. While nobody has a clear idea of what it might finally look like – and some believe it could take up to 10 years – there was strong bipartisan support in parliament this week in the belief that unless the state begins the journey, we will never realise an outcome.

The Age strongly backs this process. It has taken far too long for us to reach this point. It hopes that the negotiations and truth telling can be carried out with open minds on both sides and a willingness to accept that Victoria must finally reconcile its past while establishing a solid foundation for the future prosperity of the state’s Indigenous people.