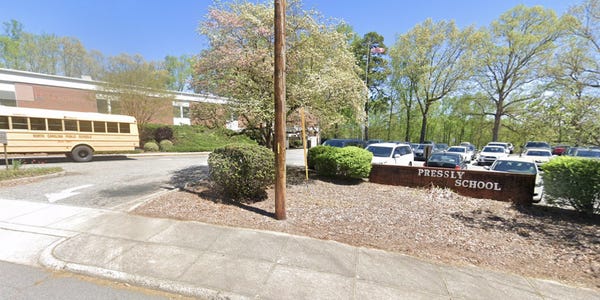 A school resource officer is accused of handcuffing a 7-year-old boy who has autism and holding him down on the floor for nearly 40 minutes, according to a federal lawsuit filed by the child's mother.

The mother, only identified as A.G., filed a lawsuit in the US District Court for the Western District of North Carolina on Friday accusing former Statesville Police Department officer Michael Fattaleh of "unreasonable use of force" in an incident involving her son, identified as L.G., at Pressly Alternative School in Statesville, North Carolina, in 2018.

The incident was recorded on Fattaleh's body camera footage, which was published last week by the local ABC News affiliate, WSOC-TV.

A.G.'s lawsuit, which asks for an undisclosed amount of damages, names the City of Statesville, Fattaleh, and the Iredell-Statesville Board of Education as defendants.

According to the lawsuit seen by Insider, Fattaleh was a school resource officer at Pressly Alternative School, and on September 10, 2018, Fattaleh put L.G. in handcuffs and held him to the ground after seeing him spit on the floor.

L.G., who has autism and has been diagnosed with sensory processing disorders, had been moved to a "quiet room" at the school earlier in the day on September 10.

His special-education teacher and behavioral health specialist brought L.G. to the room as a place to "calm down in a safe environment," after "a number of incidents in L.G.'s classroom involving other students" had led him to become "agitated" and "stressed out," the lawsuit says.

Despite a teaching assistant telling the school resource officer that they did not need any assistance, Fattaleh "abruptly entered the room," to check on the situation, according to the lawsuit.

Fattaleh then saw L.G. spit on the ground, to which he responded: "He's mine now," according to the lawsuit.

"Officer Fattaleh then forced L.G. into a kneeling position, with his arms pinned behind him and his hands tightly bound in handcuffs. He told L.G. that 'if you spit on me, I'm going to put a hood on you,'" the lawsuit said.

According to the lawsuit, Fattaleh knew the child had special needs, but did not ask any of the staff present in the room why he was brought to the room or if he had any behavioral or mental health diagnoses.

According to the lawsuit, Fattaleh then handcuffed L.G. and restrained him on the ground for 38 minutes, during which he threatened to charge the boy with a crime.

The boy was only freed from restraints when A.G. arrived at the school, according to the lawsuit.

A.G. says her son experienced "severe and permanent psychological injuries and was forced to endure extreme pain, suffering, and emotional distress and mental anguish" during the incident.

In a statement to Insider, Fattaleh's lawyer, Ashley Cannon, said: Michael "Fattaleh served as a school resource officer with the Statesville Police Department at Pressly Alternative School. On September 11, 2018, he responded to a report involving a student. Interim Police Chief David Onley and District Attorney Sarah Kirkman requested the North Carolina State Bureau of Investigation to conduct an independent investigation of the matter. The investigation was completed and there are no active investigations or criminal proceedings related to the matter."

The Statesville Police Department, the City of Statesville, the Iredell-Statesville Board of Education, and A.G.'s lawyer did not immediately respond to requests for comment.