300,000 people expected in the National Mall in Washington D.C. for Donald Trump’s second July 4 ‘salute to America’ will NOT be ordered to wear masks

President Donald Trump’s July Fourth celebration on the National Mall will give away as many as 300,000 face masks to people who want them but the White House still won’t advise people to wear them.

Interior Secretary David Bernhardt announced the mask distribution when he outlined the plans for this Saturday’s celebration, which includes ‘multiple flight demonstrations from different branches of our military, in particular the U.S. Air Force Thunderbirds and the U.S. Navy Blue Angels, and a monumental firework display,’ he said in a statement.

President Trump and first lady Melania Trump will host a viewing party on the South Lawn of the White House, an event that comes the day after they’ll be at Mount Rushmore to observe the return of the fireworks celebration there.

‘President Trump’s 2020 Salute to America will be a patriotic tribute to our men and women in uniform,’ Bernhardt said.

Social distancing will encouraged but there is no indication that face masks will be mandatory. 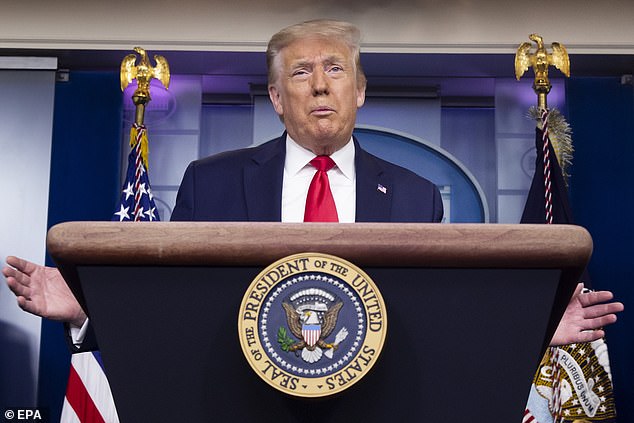 President Donald Trump’s July Fourth celebration on the National Mall this weekend will give away as many as 300,000 face masks but people are not required to wear them 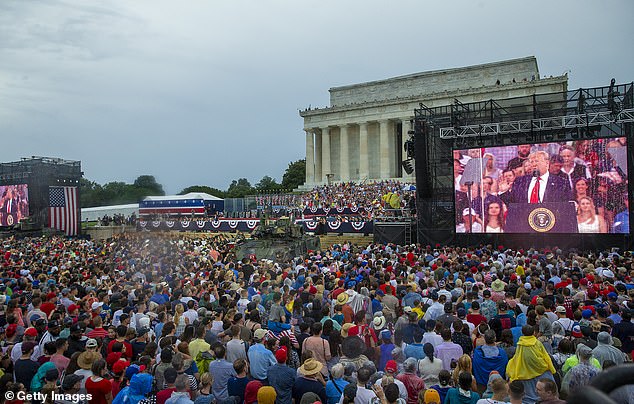 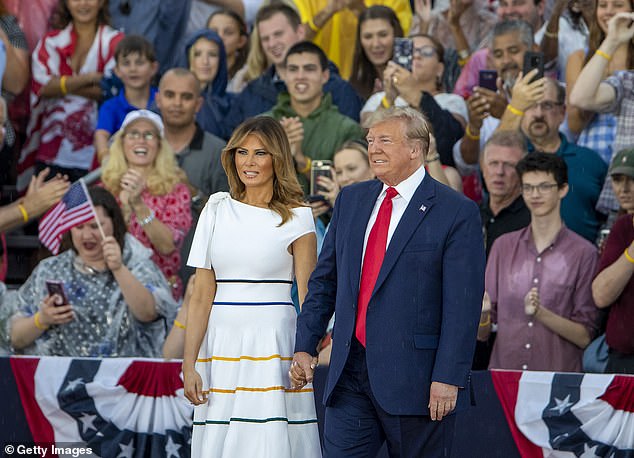 White House press secretary Kayleigh McEnany said Wednesday that the CDC recommendations on masks does not make wearing them mandatory.

‘The president has said that we should follow our local authorities with masks, so that’s the decision,’ McEnany said. ‘He encourages people to follow those authorities. CDC guidelines, I’d also note, say recommended but not required and we are very much looking forward to the Fourth of July celebration.’

‘Actually, I had a mask on, I sort of liked the way I looked, I thought it was OK. It was a dark, black mask and I thought it looked OK. It looked like the ‘Lone Ranger,” Trump added.

Meanwhile, Washington D.C. Mayor Muriel Bowser has warned about the dangers of a large crowd on the National Mall but has no jurisdiction as the event takes place on federal lands.

‘We know this is a special event for the Department of Interior. We’ve communicated to them that we do not think this is in keeping with the best CDC and Department of Health guidance. But this event will take place entirely on federal property,’ Bowser told the Associated Press.

Washington is in phase 2 of its reopening plans. And coronavirus cases are on the rise throughout the nation. The U.S. reported almost 50,000 new cases on Wednesday, the fifth single-day case record in eight days.

New outbreaks are showing up in the South and West. And several red states led by Republican governors are stepping back on their reopening processes as the number of infections spike.

Additionally, the Trump administration announced it will put special law enforcement teams in place to protect monuments over the 4th of July holiday weekend, the Department of Homeland Security announced on Wednesday.

There were no details given on the teams’ sizes or makeup, which monuments will be protected and what that protection will look like.

‘While the department respects every American’s right to protest peacefully, violence and civil unrest will not be tolerated,’ Acting Homeland Security Secretary Chad Wolf said.

President Trump has railed against protesters who took down several statues – many of them with ties to the confederacy – as part of the Black Lives Matters demonstrations that sprung up after the death of George Floyd.

Ahead of the celebration on the National Mall, Trump and the first lady will travel to South Dakota on Friday to watch a fireworks display at Mount Rushmore, the first since 2010 when the National Park Service stopped them out of concern they could ignite wildfires in the nearby 1,200 acres of forest.

‘I’m going to Mt Rushmore on July 3, we’re going to have a tremendous evening,’ the president said at the White House on Thursday.

Republican Gov. Kristi Noem of South Dakota, who plans to attend the event with the Trumps, told Fox News that ‘we won’t be social distancing.’ Face masks are also not required.

She has down played concerns about the coronvirus even as cases are on the rise in her state. At Trump’s campaign rally in Tulsa last month, eight members of his advance team tested positive for the coronavirus.

In addition to the concerns about wildfires and surging coronavirus infections, Native American groups are planning to protest the president’s visit as they see Mount Rushmore resting on ground stolen from their ancestors.

An immediate concern for the July 3 event is the threat of fire. South Dakota is suffering from abnormally dry conditions this summer, increasing the risk for wildfires in the Black Hills area.

The National Park Service completed an Environmental Assessment that evaluated the potential effects of resuming fireworks ahead of the celebration and no significant impact was found. 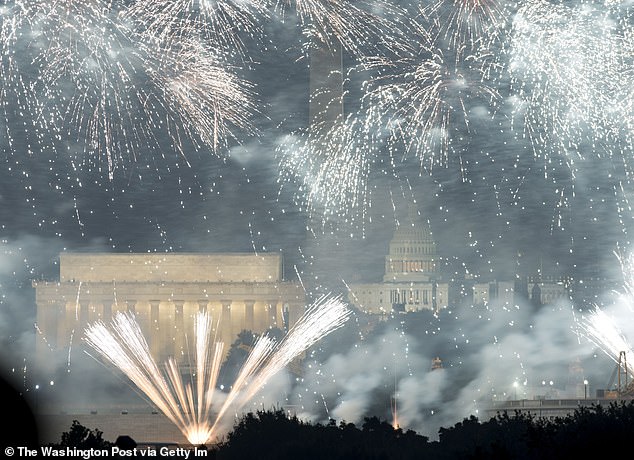 Fireworks at last year’s Fourth of July celebration on the National Mall with the Lincoln Memorial and the U.S. Capitol visible 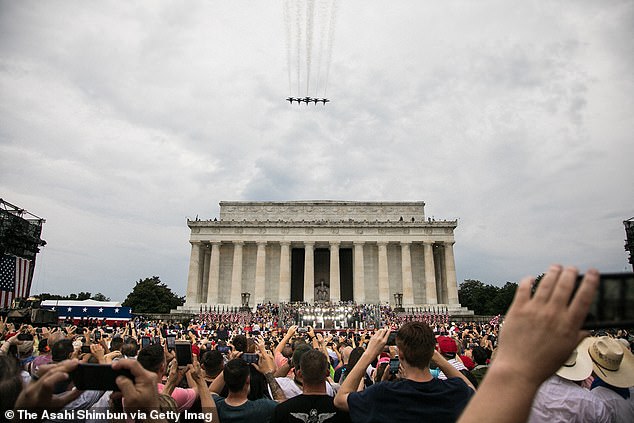 U.S. Navy Blue Angels fly over the Lincoln Memorial at the 2019 Salute to America 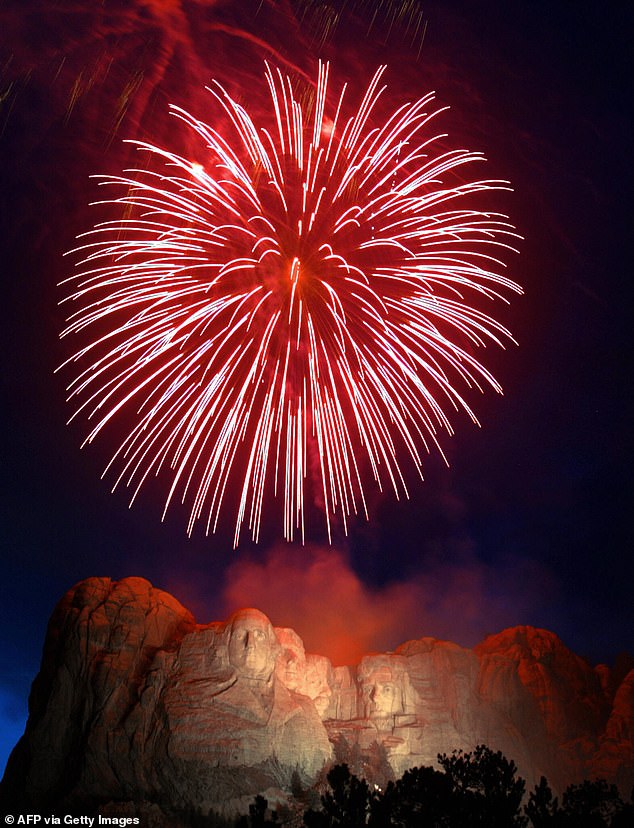 A scene from the July 3, 2004 celebration – there have been no fireworks at Mount Rushmore since 2010 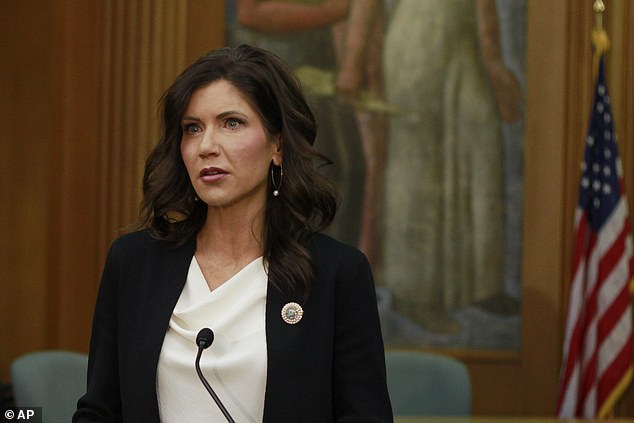 Republican Gov. Kristi Noem of South Dakota said there would be no social distancing at July 3 event at Mount Rushmore

But Bill Gabbert, former fire management officer for Mount Rushmore and six other national parks in the area, told the Argus-Leader last month that the fireworks were ‘ill advised.’

The U.S. Drought Monitor labeled nearly all of southwestern South Dakota, including most of the Black Hills area, as ‘abnormally dry.’ Past firework displays have caused 21 fires in the forest area surrounding the monument.

Fire fighters will be standing by.

The National Park Service ‘has cleared and treated fuels in the immediate vicinity and will be stationing rapid response teams/assets in locations to protect the area,’ Interior Department spokesman Ben Goldey told DailyMail.com.

Ian Fury, a spokesperson for Governor Noem, told DailyMail.com that ‘we are confident that the Rushmore Fireworks celebration can be conducted safely.’

He said there was a ‘Go/No-Go checklist’ for the event to determine safety conditions for the fireworks.

‘The Go/No-Go checklist for the event was developed in collaboration with several state, local, and federal agencies. This checklist is based primarily on forecasted and current weather and fuels conditions that are used to predict fire behavior as well as the availability of fire suppression resources,’ he said.

In addition to the fireworks, the even will include fighter jets thundering over the 79-year-old monument.

The celebration is expected to last 18 minutes and cost $350,000. It is being paid for by state funds.

Around 7,500 people are expected to show up to watch the fireworks display. The state held a lottery to distribute tickets. ‘All participants may be subject to health screening requirements,’ was the warning listed on the lottery’s webpage. The page says nothing about wearing a face mask or observing social distancing protocols. 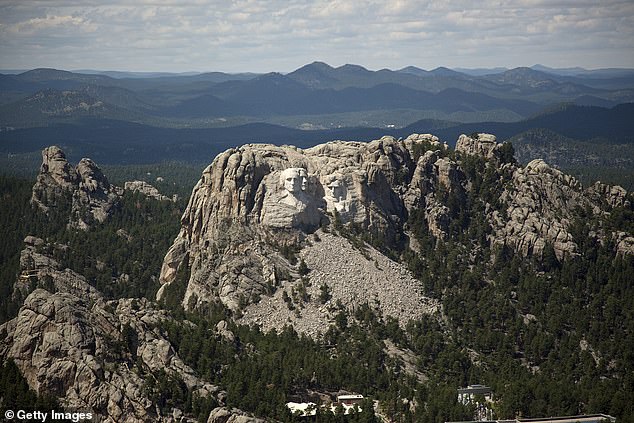 Past firework celebrations have caused 21 wildfires to break out in the Black Hill surrounding Mount Rushmore; fire fighters will be standing by for the July 3 event 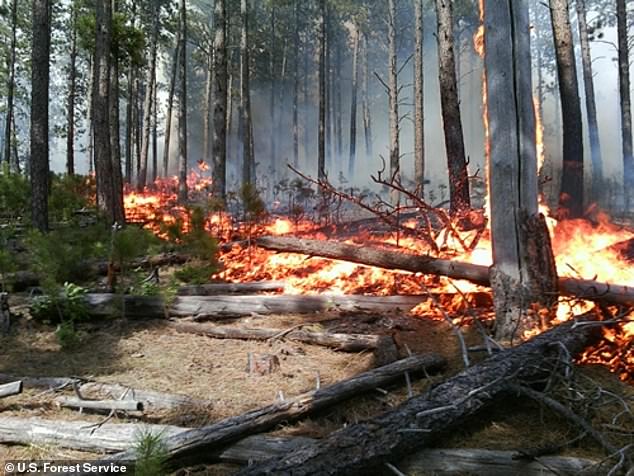 South Dakota has had dry weather this year, increasing the risk for wildfires in the Black Hills area – a past forest fire in seen the picture above 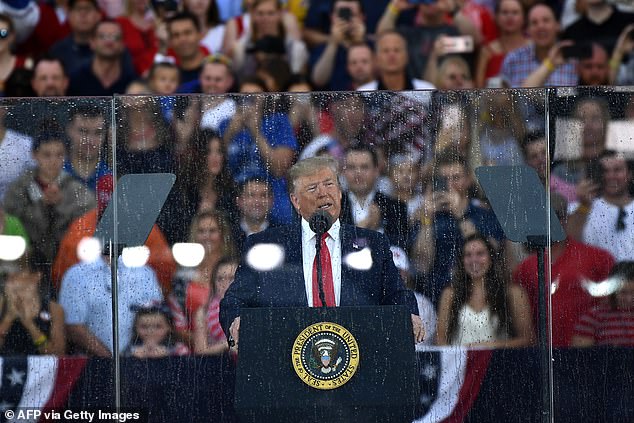 The planned fireworks are also drawing sharp criticism from Native Americans who view the monument as a desecration of land stolen from them.

‘Mount Rushmore is a symbol of white supremacy, of structural racism that´s still alive and well in society today,’ Nick Tilsen, a member of the Oglala Lakota tribe and the president of a local activist organization called NDN Collective, told the Associated Press. ‘It’s an injustice to actively steal Indigenous people´s land then carve the white faces of the conquerors who committed genocide.’

The monument was conceived in the 1920s as a tourist draw . South Dakota historian Doane Robinson recruited Gutzon Borglum, a renown sculpture at the time, to abandon his work creating the Stone Mountain Confederate Memorial in Georgia, which was to feature Robert E. Lee, Jefferson Davis and Stonewall Jackson.

Borglum was a member of the Ku Klux Klan, according to historians, which he joined to raise money for the Confederate memorial.

He left Stone Mountain to work on Mount Rushmore.