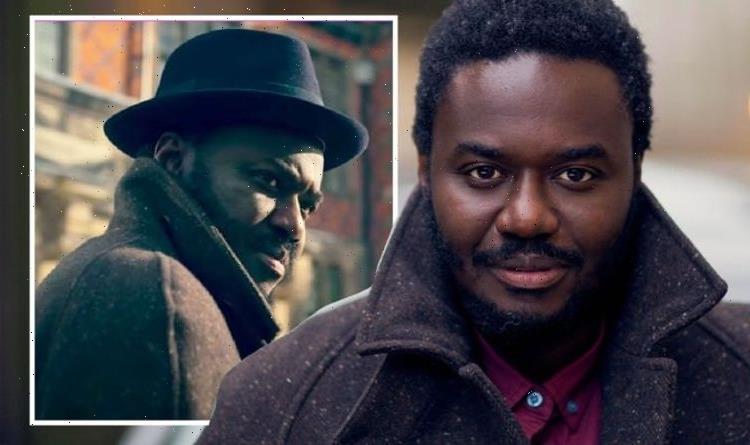 Wolfe will use dark comedy to weave viewers through crime investigations in a less than conventional way. The show is hoping to capture the hearts of the nation with its witty take on how forensic officers carry out their roles and viewers are set to share their reactions on Twitter. However, which host of famous faces have signed up to be in the cast of the new Sky Max programme?

Who is in the cast of Wolfe?

Leading the cast of the comedy-drama is Babou Ceesay, who plays the show’s protagonist Professor Wolfe Kineth.

The character is defined as England’s finest crime expert but he does sometimes bend the rules of his job to ensure he gets what he wants.

Wolfe justifies his actions by saying he has valid reasons for carrying them out but viewers will have to make up their own minds as to whether he is correct.

Each episode will follow the leading star of the show as he and his colleagues investigate a new and outlandish case.

Though, he is unable to shut off his scientific knowledge when he is at home, making his private life somewhat testing.

Speaking of his character, Babou told the press: “I can’t wait for the viewers to meet Wolfe. Paul Abbott has poured his unique take on humanity into this complicated, fascinating character.”

Of his experience on set, the actor added: “I loved every minute of bringing him to life and working with the incredible cast and crew.

“It’s been an extraordinary experience creating the show and viewers are in for a fun and enigmatic journey.”

However, Babou will be starring alongside a host of other famous faces, including Naomi Yang as a child prodigy.

The actress, who has also starred in dramas such as The Salisbury Poisonings, will help Wolfe crack some of the cases.

Sherlock star Amanda Abbington will also be featuring in the cast, playing the character of Dot, who is a single, middle-aged mother.

The team’s entomologist will be played by Vera and The Bay star Adam Long and Shaniqua Okwok will play a character who has a dark past.

Wolfe will be drawn into conflict with her character but how their story will transpire is yet to be seen.

Harry Potter star Natalia Tena, who played Nymphadora Tonks in the blockbuster films, will also be seen as a member of the cast.

What will happen in Wolfe?

As explained, the investigative team will pick up a new case for each episode but it won’t come without its challenges.

A teaser for the show reads: “Each week Wolfe and his team are sent to new, compelling locations to piece together the parts of an outlandish and unconventional investigation.

“His team will face exploding vehicles, buildings and even bodies, doing anything to unearth the mysterious truth behind these crimes.

“One thing is for sure though, they won’t be doing it in a way anybody expected as Wolfe attacks life with a bipolar approach.

“And deploys his scientific brain to each new case, but what works so well on a crime scene, at home, not so much.”

Who has written the script for Wolfe?

The new comedy-drama has been masterminded by Shameless creator Paul Abbott, who has been assisted in the process by a host of other writers.

Directing the episodes was Adrian Shergold and Sean Spencer whilst Emma Burge serves as producer of the series.

Discussing his work, Paul said: “I’ve loved creating the character of Wolfe. I dredged a lot of my own flaws to get him onto the page. I can’t think of anyone better than Babou to breathe life into the guy.”

Wolfe will be available to stream on Sky Max on Friday September 10, 2021. Viewers will be able to watch the episodes with a NOW Entertainment Membership.