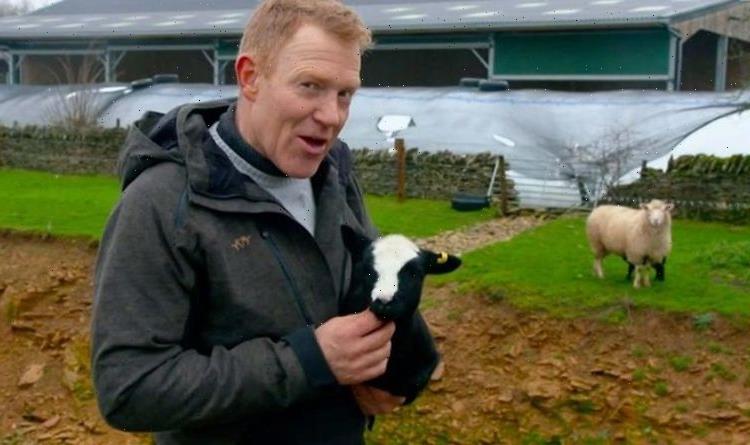 Adam Henson is one of the Countryfile presenters and he is due to feature in a new Channel 5 documentary series. The farmer will star on the four-part show titled Our Family Farm Rescue, during which he discovers vital changes farmers are having to make to keep their businesses alive. Express.co.uk has all you need to know about where Henson’s own family farm is located.

Adam Henson is one of the best-known farmers in the UK and he has continued his father Joe’s legacy.

He grew up in the Cotswold Hills and knew he wanted to go into farming one day, getting involved in the family business at a young age.

He now runs Cotswold Farm Park, which first opened back in 1971, and he and his sisters would help out on the farm.

Henson gained a qualification in agriculture and its management from Seale-Hayne Agricultural College in Devon.

He later travelled the world to gain more insight and experience in the world of agriculture.

Henson took over the tenancy of the farm in 1999 and he joint-runs the 650-hectare estate with friend Duncan Andrews.

The location is home to more than 50 breeding flocks and rare breed farm animals.

The farm is in Guiting Power, Cheltenham, and the website lists a postcode GL54 5FL.

Viewers may be interested to hear they can stay at the farm park, which has camping pitches, camping pods, glamping tents and lodges.

The glamping tents have everything a family will need including lighting, electricity, a fridge, kettle, gas barbecue and more.

The lodges provide an extra touch of luxury and they are located on their own private field.

They each include a bathroom, family kitchen and a lounge area with a private deck overlooking the countryside.

All the details on how to stay at the farm park can be found on the official Cotswold Farm Park website.

The farm is steeped in history, which goes back to 1962 when Adam’s father Joe took over the tenancy of Bemborough Farm.

By 1969 he had started to keep rare breed animals on the farm, including cows and sows.

In 1971 the Cotswold Farm Park opened to the public and it was the first of its kind in the world.

Now, in this brand-new series, Adam Henson will be touring other farms to find out how families across the UK are coping.

The synopsis for the programme says: “Countryfile presenter and farmer Adam Henson examines the changes farmers are making to their businesses to survive, from transforming drab barns into luxuriously usable spaces to tapping into the lucrative tourist trade and maximising profit with farm-to-fork ventures.

“He begins at Castlehill Farm, where Ian and Karen Taylor’s children are keen for their parents to find a new source of income to keep them going in their retirement.”

The four-part series makes its debut on Channel 5 tonight (June 20) at 9pm.

The 55-year-old is on Instagram and he has been keeping fans up to date with life on the farm.

One of his donkeys, Clover, gave birth to her foal in June and fans were given the chance to name her.

Offering their first pop-up glamping experience, the duo said: “How wonderful it is to see so many happy memories being made.

“We cut the rope yesterday to open our first ever pop-up glamping experience. Thank goodness the British weather behaved, allowing children to carry on playing late into the summers evening.

“Meanwhile parents relaxed in our central chill out tent, praising our staff for how easy they’ve made their holiday experience.”

Our Family Farm Rescue with Adam Henson airs on Channel 5 at 9pm on July 20.