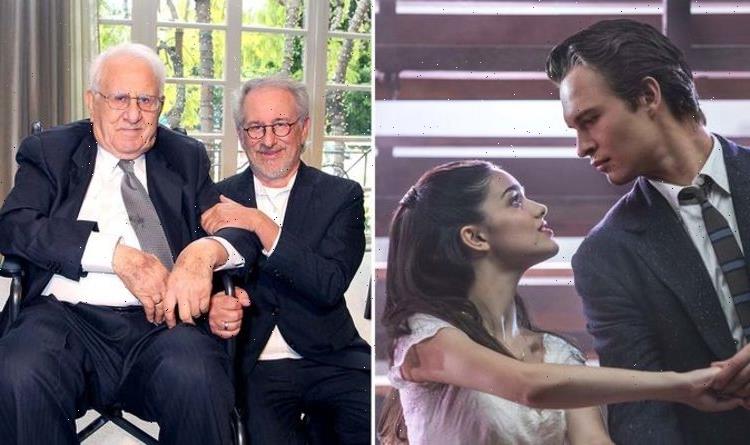 Hollywood’s most iconic modern director has been filmmaking for over 50 years. During his incredible career, Steven Spielberg’s father would visit every single one of his son’s sets. The last movie Arnold Spielberg saw him shooting was the West Side Story remake, before he died at 103 last year.

Steven Spielberg said in a new interview: “My dad loves West Side Story, he’s seen a number of productions of it.”

Before the Oscar-winning 1961 movie, which Arnold would have seen aged 44, there was the original 1957 Broadway stage production which was adapted for film.

Now 60 years later and his son has remade the Hollywood classic to five star praise from the critics.

However, his father sadly was not able to see it, having passed away on August 25, 2020.

Speaking with Digital Spy, Spielberg shared: “He was 103 and a half when he passed, and I hadn’t finished the film yet.

“But he was kind of on the set sometimes because he’d be in LA and we’d be in New York shooting, and he’d be on the iPad on FaceTime, and he’d be able to watch the setups and watch some performances.

“We’d bring the iPad over to the monitor so he could see the playbacks…at that point he was too elderly to travel to the set, to New York, from LA.

“It was the only film set that he has not visited. The only one.”

Steven Spielberg talks about his family during 2018 interview

Spielberg remembered how his centenarian father had travelled the world to see his talented son make Hollywood movies across the genres.

The 74-year-old director continued: “He came to Poland for Schindler’s List, he came to England for the Indiana Jones movies.

“And I just felt that he’d loved it so much and I was so sad he couldn’t see it that I dedicated the film to him.”

The new West Side Story has been hailed as one of the director’s best movies in decades.

The romantic drama is set in 1950s New York, following street gangs the Jets and the Sharks.

Among the rivalry and brawls, white Jet Tony falls in love with Puerto-Rican Shark María, in this retelling of William Shakespeare’s Romeo and Juliet.

The 2021 remake stars Ansel Elgort and Rachel Zegler as the two lovers in what is considered one of the greatest musicals ever made.

West Side Story hits cinemas on December 10, 2021 and the full Steven Spielberg interview can be read on the Digital Spy website here.