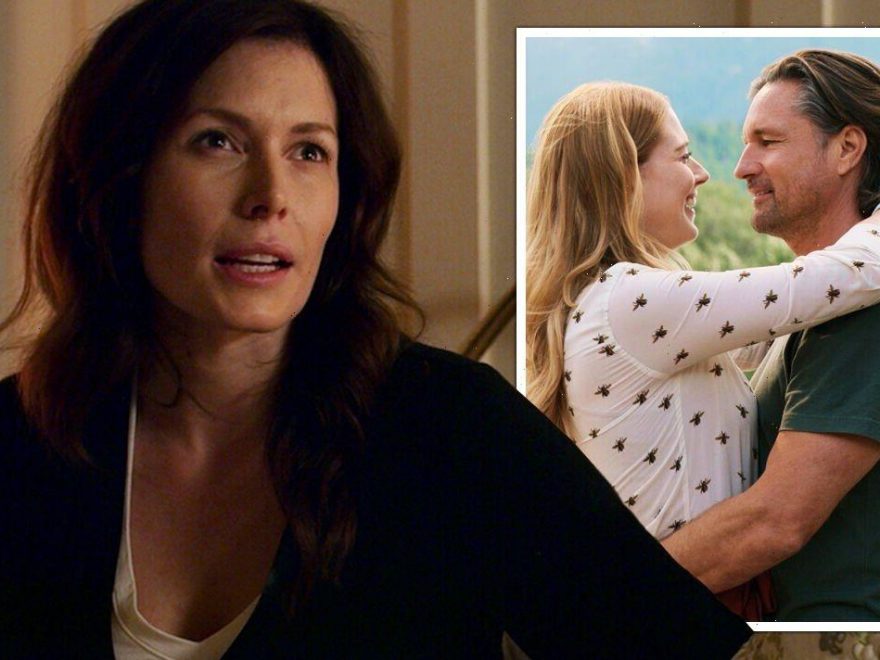 Martin Henderson: Virgin River star reveals he's back in US

Mel Monroe (played by Alexandrea Breckenridge), Jack Sheridan (Martin Henderson) and the rest of the Virgin River cast have been revealed in all their glory in a first-look at the upcoming Netflix series. Unfortunately, fans have been predicting a sudden exit for Jack’s nosy ex-girlfriend Charmaine (Lauren Hammersley) after she failed to appear in the latest preview.

Lauren could be about to bow out from her Virgin River stint as Jack’s pregnant ex, Charmaine.

The rival for Jack’s affections only appeared in three episodes of the last season to confirm she had suddenly tied the knot with her new partner, Todd (Patrick Sabongui).

However, viewers are now predicting she could have a reduced role building up to her complete exit from the show when season four is released next month.

Others have even suggested Lauren has already been removed from the cast completely when she failed to get a look-in in TV Line’s new stills.

On Reddit, TheKarlieAngel wrote: “I don’t see Charmaine in these pictures – can either be good or bad (hopefully they give her a good exit).”

“I didn’t see Charmaine,” sigh_sarah celebrated, adding a party emoji to their comment.

Charmaine has certainly proven divisive over the years, so fans may be happy to see the back of her if she does indeed say her goodbyes in season four.

Regardless, it will still be a shame to see the cast given yet another huge shake-up, especially considering Hope’s (Annette O’Toole) severely reduced role in season three.

Whatever262122 commented: “No Charmaine and more importantly no Todd!

“I think Charmaine is in season four (hopefully less screen time) but not sure about Todd. Not that I will miss him.”

Although hbs131618 argued: “This has nothing to do with how much characters will be in the season.

“They choose specific photos that won’t give away much of the plot.

“Charmaine could be in a huge portion of it still but we would never know until we watch the season.”

Actress Lauren has revealed with her social media posts she has spent much of her time in her home in Nova Scotia while the cast has been busy filming Virgin River in Vancouver.

Despite the rumours, showrunner Sue Tenney has previously confirmed Charmaine will feature in season four in at least some capacity.

She told Entertainment Weekly her storyline will “blow everybody away”, so fans should expect a huge revelation for her and her unborn twins.

In the meantime, anticipation for Virgin River’s return has been building despite the series receiving middling reviews from Netflix subscribers.

The mixed reception is certainly in no small part thanks to Charmaine’s extended pregnancy beginning to grow tiresome for many viewers.

Redditor thedutchqueen joked: “Season four prediction: Charmaine is still only, like, four weeks pregnant talking about ‘when the twins get here’.”

As each season is usually just a few weeks removed from the previous instalment, Charmaine may still be in the middle stages of her pregnancy if she comes back for season four at all.

Virgin River season 4 will be released on Wednesday, July 20 on Netflix.