On July 30, 2015, a dough-faced 19-year-old Vine creator named David Dobrik posted his first YouTube video, a five-minute vlog called “PUTTING A PUPPY INTO THE MICROWAVE!!” Part “Drake & Josh” (minus the adult supervision) and part “Jackass” (minus the corporate oversight), that hyper-active but ultimately adorable clip anticipated the kind of all-caps antics that would elevate Dobrik and his wack pack of Disney Channel-ready edgelords into new media superstars. (Subsequent hits include “TARANTULA WOULD NOT GET OFF MY GIRLFRIEND!!,” “SURPRISED FRIENDS WITH $40,000 PRIVATE JET!!,” and of course the classic “WE FOUND THIS LIVING IN HIS TOILET!!”)

In August of 2020 — after eclipsing eight billion views across his various channels and being selected over pop stars Harry Styles and Shawn Mendes as People Magazine’s “Sexiest Heartthrob of 2019” — Dobrik bought a mansion in Sherman Oaks for $9.5 million. At some point in there, between Dobrik putting a puppy in the microwave and getting a super-lucrative sponsorship deal with Chipotle (they named a burrito after him!), 40-year-old web video elder statesman Casey Neistat began making a documentary about the young content kingpin in an effort to understand the next generation of internet creators. And at some point soon thereafter, a 23-year-old “senior reporter” at Business Insider published an article that threatened to de-platform Dobrik’s empire overnight.

For many of the extremely online people born after the year 2000, “Under the Influence” offers a closer look at the cultural history that’s already close to their hearts, less valuable for Neistat’s insight than for his access (not that it seems particularly difficult to sell a kid like Dobrik on the idea of participating in a documentary about himself). For the rest of us — people who only tend to use YouTube for normal stuff like movie trailers, Yellow Magic Orchestra-era Ryuichi Sakamoto footage, and old clips of the “Walker, Texas Ranger” lever from “Late Night with Conan O’Brien” — this film provides a bone-chilling biopsy of the malignant narcissism that’s quietly metastasized across Gen Z’s celebrity-industrial complex, more valuable for Neistat’s perspective than for any of his characters.

It’s not that millennials are unaware of people like Dobrik (we invented him!) or scandalized by the chaotic selfishness of the click economy they inherited from us, and Neistat is savvy enough to recognize as much. “Under the Influence” never panders to any of its various audiences in order to get its point across, which allows the film to sidestep the “won’t someone think of the children!?” alarmism that tends to accompany most docs about online mishegoss. At the same time, Neistat implicitly understands that every community has developed its own internet; he knows first-hand that earth-shaking news in one corner of Twitter may not even move the needle in another, and that today’s stars can become incredibly rich and famous without a single person outside their core demographic even knowing who they are. The world of YouTubers doesn’t only have its own stars, it also has its own currency (views) and its own news sites (many of them YouTube channels).

The upsetting power of Neistat’s documentary may be expressed through Dobrik’s toxic persona and the horrific details of the twin missteps that threatened to bring him down, but it’s rooted in the same algorithmic silofication of digital culture that we tend to associate with a red and blue political divide. It’s bad enough that people are getting their own facts, and it’s even worse that they’re walling themselves off inside their own ecosystems — ecosystems in which accountability is determined by a small handful of advertisers, and attention isn’t just the product, it’s also how you pay for it. It’s the texture of the social fabric itself.

Film Twitter might be a layer of Hell that not even Dante could have fathomed, but at least it’s nominally undergirded by art. A community that revolves around content, on the other hand, will never produce enough substance to allow for any greater ethos. It will always be eating itself alive just to stay in motion. 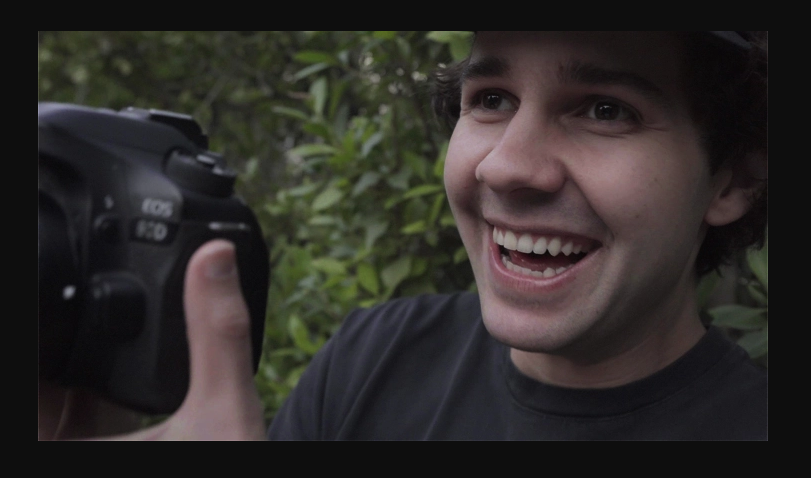 That isn’t some kind of dirty secret in the world of “like and subscribe.” Dobrik wears a sweatshirt that says “views” across the chest, and the only decór on the walls of his condo — the one he owned before the mansion we see him buy in Neistat’s film — is a custom neon sign that spells “clickbait.” People like Dobrik rely on a catechistic belief in their own inherent watchability.

This largely archival/observational documentary isn’t big on talking heads, but the early scene in which “Drake & Josh” star Josh Peck exalts Dobrik’s primitive appeal as a legitimate superpower (“he’s not watching Godard films!”) casts a long shadow over the smooth-brained shenanigans to come. And the alleged sex crime they lead to. Concerned that the “Vlog Squad” might not be responsible enough to shoot an alcohol-fueled “group sex” episode starring Dobrik’s most predatory friend and a few starry-eyed young fans? Go back to your Blu-ray of “Goodbye to Language,” boomer.

Of course, even a condescending millennial who grew up in the wholesome age of “The Real World” and “Girls Gone Wild” can appreciate the self-perpetuating momentum that brought Dobrik to that precipice, and “Under the Influence” doesn’t shy away from the sheer thrill of pioneering a new career path. Neistat’s attention to the performative nature of Dobrik’s videos (“I convince people I’m having fun” is how he describes his job) — as well as his decision to introduce the Business Insider article early on and leave it dangling over the rest of the movie like the Sword of Damocles — prevents this from turning into a reductively linear rise-and-fall story.

And yet, there’s no mistaking the thrill of becoming rich and famous with your childhood best friends, hiring the girl next door to work as your assistant, and watching the corporate world bend over backwards to shower you with money and toys. The first half of “Under the Influence” would feel like one of those wish-fulfillment kids movies from the early ’90s (“Blank Check,” “Rookie of the Year,” etc.) if not for the natural grotesqueness of watching that narrative unfold in real life, and the abiding sense that something is… off. The “Jackass” boys got rich by mangling each other on screen, but it always felt like they were doing it for love of the game — that they’d be pogo-sticking on each other’s testicles in a skatepark somewhere even if there weren’t cameras around.

The Vlog Squad’s content was far more varied than that, but even their most innocent videos reek of necessity. It’s safe to assume that Dobrik’s audience wasn’t bothered by the smell, but Neistat doesn’t press the issue; rather than meaningfully interrogate the sweet girl it uses to personify the Vlog Squad fanbase, “Under the Influence” prefers to follow her around and watch as her zeal is shaken by the news that Dobrik’s world might not be as safe and carefree as it appears on camera. Does vlogging project an illusion of transparency that makes it uniquely dangerous for isolated young people who depend on parasocial relationships for connection? Perhaps, but Neistat is so afraid of finger-wagging at the future of social media — and so hesitant to explore his place in its past, despite acknowledging a sense of transference in his opening voiceover — that his film elides much of this story’s emotional complexity.

Instead, “Under the Influence” focuses on the maintenance, porousness, and utility of the transparency itself. How do people who’ve been conditioned to share their lives (and then massively rewarded for monetizing the window through which people are invited to watch along) negotiate the aspects they’d rather keep private? Or keep hidden?

And how does someone like Dobrik do any of that while living under the constant fear of his audience simply diverting their attention to someone else? Deleting a video — or, in the case of the stunt that resulted in a traumatic injury to one of Dobrik’s closest friends, never posting it in the first place — doesn’t mean that whatever was on it never happened. But such things seem to be easily confused by people who get rich off the views. By the end of Neistat’s film, the only thing Dobrik can’t afford is to look at himself.

“Under the Influence” premiered at the 2022 SXSW Film Festival. It is currently seeking U.S. distribution.