Greyhound is the best movie that’s premiered on a streaming service since the pandemic started. It’s also the first one that was intended to be a Tom Hanks summer blockbuster. There’s a case to be made for The King of Staten Island or Scoob! doing exactly what they set out to do as well, but Greyhound is the movie that brings summer movie entertainment home to Apple TV+ on July 10.

Except for a flashback to introduce Ernie Krause (Tom Hanks) and Evelyn (Elisabeth Shue), the woman he wants to get back to, Greyhound stars right in the combat mission and doesn’t let up for 90 tight minutes. Krause leads an Allied convoy in the Atlantic Ocean during World War II. They take on Nazi U-boats and engage in many naval battlese over the course of a few days.

RELATED: ‘The Outpost’ Movie Review: A Tribute To the Real Soldiers

You don’t really get to know any of the sailors besides Krause. It’s not Saving Private Ryan on water. Greyhound is a dogfight movie at sea.

Naval battles are slow and lumbering. Boats exchange fire and maneuver around each other. Most naval war movies of the past only have a battle or two because there’s only so much you can do. Even Crimson Tide and The Hunt for Red October are sparse, but make up for it in other ways.

Greyhound finds lots of ways to stage battles and keep the excitement ramped up. It never feels like real boats. It’s always CGI. If they had boats to sail out, they definitely didn’t rig them with explosions or blanks to fire at each other. That’s just how they make movies now, but it shows what the U.S. Navy was capable of.

Ships make hard turns in the ocean, with CGI splashes on the camera. The vast ocean gives director Aaron Schneider a long time to build up approaching torpedoes. You can see the trail in the water. Schneider finds lots of angles on the naval action too, including an overhead view from above, although never from the German point of view. Different times of day too. The ocean looks like a different beast in daytime and night.

Hanks wrote the screenplay. A noted World War II buff from Saving Private Ryan and producing Band of Brothers and The Pacific, Hanks loads the script with military lingo and technical nautical terms. Half of the script is repeating commands and affirming “aye aye.” 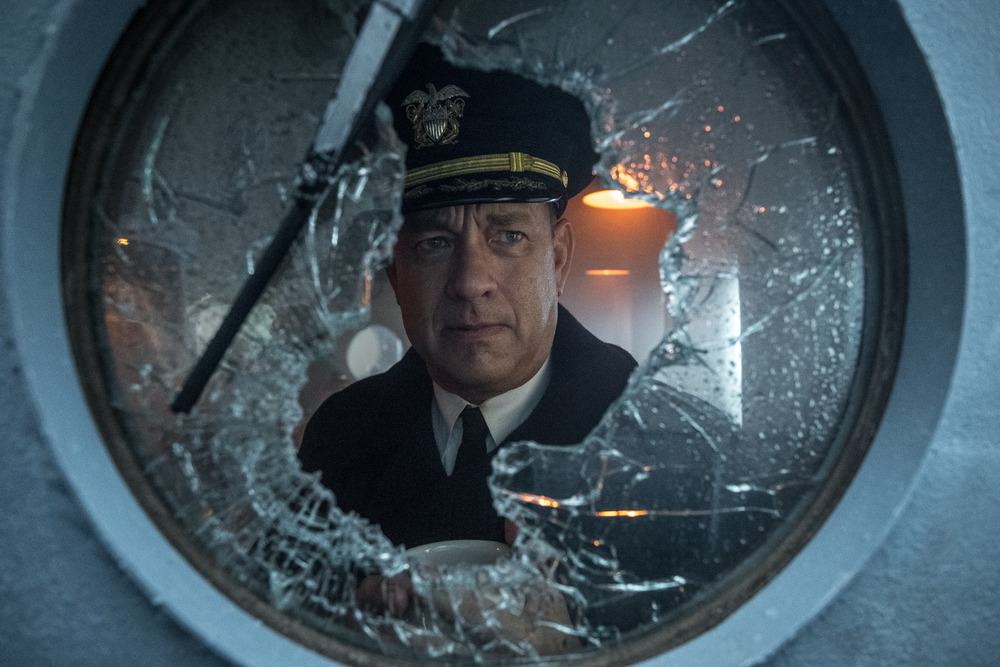 RELATED: ‘Lost Bullet’ Movie Review: The French and the Furious

During the battles, the sailors run between the cabin and the deck, including Krause. It feels very accurate to how technical and impersonal battle might have been. Greyhound does take time to check in with the crew and deal with casualties, but those scenes are as brief as it would have to be mid-battle.

Greyhound earns a place in the Tom Hanks WWII canon. He’s already been in an epic and produced two epic miniseries, so this one is a lean, tight action movie about a few days of heroism that saved a fleet of U.S. ships.