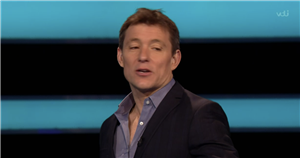 Tipping Point fans were left swooning on Tuesday afternoon, as they spotted some burgeoning chemistry between host Ben Shephard and contestant Danielle.

As Danielle celebrated her victory, having made it through to the final round, viewers noticed Ben getting closer to the blonde bombshell as he reached out to pat her shoulder as a good number of counters dropped.

And though she didn't quite manage to secure the jackpot counter from the machine, she did at least score a cuddle from Ben as he congratulated her on her impressive win.

The two were allowed to get close, as the show was a repeat initially aired before the coronavirus pandemic and its associated restrictions.

But fans were still quick to point out their blooming chemistry, as they took to Twitter in droves, with one posting: "Ben got his cuddle!"

Another chipped in: "Ben DEFFO wants a bit of this gal!", as a third echoed: "Ben, get your Lynx Africa on, my son!"

"Ben swooping in!" someone else giggled.

Danielle narrowly avoided scoring the jackpot counter from the Tipping Point machine – but, as she declined the gamble and instead took the money she'd already secured away, it was revealed she would have made off with an impressive £10,000 if she'd taken the risk.

But she did manage to scoop a sweet mystery prize of a short break away.

Despite their apparent chemistry, Ben is very happily married to wife Annie, with whom he tied the knot in 2004.

Back in April, Ben shared a sweet snap of him with his wife of 17 years, after they both received their Covid-19 vaccines.

In the sweet shot, Annie can be seen with her hand on her hubby's shoulder as she wore a medical mask and her vaccination sticker on her forehead.

Ben, meanwhile, could be seen beaming with his own sticker stuck to his navy blue jacket, as he rocked a chic pair of shades.

Writing alongside the post, Ben penned: "#JabbyMcjabface First one done! thanks to all the team @harlequins wonderfully efficient friendly staff, and a cracking setting too. I’d say the sun seems a bit brighter today! #grateful."

Speaking about celebrating his wedding anniversary last year, Ben posted on his social media: "Can't quite believe another year has gone past, suddenly this one feels all the more poignant because of what’s happening.

"16 years married to @mrsannieshephard 25 years together and it's fair to say the current climate is seriously testing the strength of her feelings towards me."