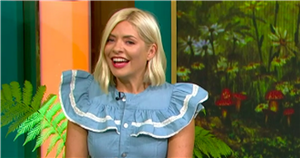 This Morning viewers were dumbfounded as two guests appeared on the programme to explain their connection with fairies.

Speaking to Phillip Schofield, 59, and Holly Willoughby, 40, they detailed a number of encounters.

Host Phil, even explained his own encounter which he believed could have been with fairies from when he was a child.

He said: "When I was a child, I went out walking with my parents and they had seen a load of rabbits and I hadn't.

"I saw a ring of mushrooms – known as fairy rings and I stood inside it and said I wanted to see a rabbit.

"And I kid you not at that very second a rabbit appeared."

Viewers of the daytime favourite were not easily convinced by the discussion and took to social media to chime their views.

One tweet read: "How bad is day time TV I really don't know why she watches it#ThisMorning 'we can see fairies.'"

Another online user said: "What a load of rubbish fairies #ThisMorning."

A third seemed to be confused, asking: "What on earth is going on? #ThisMorning."

"Now I know what away with the fairies looks like. #ThisMorning," joked a fourth.

Meanwhile other felt Holly's outfit was very fitting for the interview.

One person added: "Anyone else think Holly looks like Alice in Wonderland in that fairy setting? #ThisMorning."

Meanwhile, on the programme Phil explained "it had been a long summer" after he'd mixed up the date.

Correcting himself he said: "On Tuesday's show."