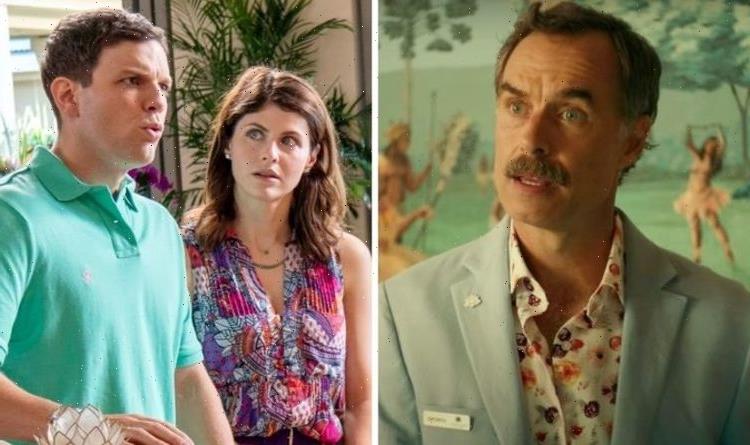 HBO’s new satirical drama The White Lotus premiered to rave reviews on Sunday night. At one of the most exclusive resorts in Hawaii everything can and will happen over the course of one week, and hotel manager Armand (Murray Bartlett) could have his work cut out for him with one guest in particular.

The cast of HBO’s new miniseries The White Lotus may have revealed the show’s biggest rivalry ahead of the second episode’s release this Sunday.

The series premiere introduced viewers to an eclectic collection of privileged guests and long-suffering staff, led by the resort’s manager Armand.

As the vacation unfolds, the clientele are blissfully unaware their idyllic getaway is about to be turned into a grisly crime scene.

Amongst a cast of colourful and exhausting comedic characters, the entitled Shane (Jake Lacy) has taken his new wife Rachel (Alexandra Daddario) on their honeymoon after their whirlwind wedding.

Unfortunately, Shane’s lofty standards haven’t quite been met, putting him in conflict with the hotel’s staff.

Speaking to HBO in a new behind-the-scenes video for the first episode, Bartlett and Lacy have teased their characters’ upcoming confrontation.

Bartlett shared: “I really love the scenes between Shane and Armand, because there’s this sort of competitive thing and they’re kind of trying to one-up each other.

“There’s this build of their interactions throughout the show which is really satisfying because Shane is such a d**k.”

Although Shane is used to a life of luxury, Bartlett hinted Armand could eventually come out on top.

So far, Shane is undoubtedly one of the show’s most unlikable characters after enjoying a life of wealth and privilege working for his father’s successful business.

Jake Lacy explained: “Shane lives in New York, works at his dad’s commercial real estate firm, newly married, and has not experienced a lot of set-backs.

As Shane’s entitled complaints start to weigh on the hotel staff, Armand’s patience could finally start to snap as the secrets of the resort start to spill out.

Plus, Rachel could soon discover that her new husband is hiding some secrets of his own.

Series star Alexandra Daddario revealed: “Rachel is a woman who has entered into a marriage abruptly with someone who she was only dating for a few months.

“She is on her honeymoon and is just now beginning to have doubts and questions about what she’s gotten herself into.”

While Rachel simply wants to have a relaxing week away with her new life partner, Shane is determined for everything to go according to his plans.

Their marriage could be heading towards disaster if Shane reveals more of his true colours as their stay at the White Lotus progresses.

Meanwhile, as the events of the week start to take some more unexpected turns, Armand and Shane’s subtle jabs could soon build into a full-on brawl later in the series.