As Sunday’s episode of The Walking Dead: World Beyond shed new light on Felix’s fraught past, the future of our young protagonists looked ever more like it was about to go up in smoke. That’s not a metaphor, either; with every step, they drew nearer to a perpetually raging fire surrounded by empties called the Blaze of (ha) Gory. Did anyone wind up getting burned? Read on.

‘YOU SHOULD BE SCARED EVERY SINGLE TIME YOU ARE OUTSIDE THOSE WALLS’ | As the hour began, Iris’ attempt to kill her first empty nearly got her killed. But only nearly. She and the zombie tumbled off of a concrete embankment, at which point, she promptly puked on it. Still, she couldn’t bring herself to dispatch the now-demobilized walker (prompting Hope to apologize to it as the gang left it behind). Later, Elton and Hope sensed in one another a kindred spirit, at least insofar as they were both pretty chill about the end of their species. At that point, Iris spotted in the distance smoke plumes from the Notorious B.O.G., which served almost as a beacon for the undead. Nonetheless, Iris was sure they’d get through it; Hope, apparently less so — she left behind an empty can of peaches stolen from Felix’s apartment to let him know which way they were headed.

While making tracks, the kids ran afoul of an empty whose head was abuzz with actual bees. When Elton stumbled, Silas found himself unable to bash the creature to save his friend. Thankfully, a little spray paint to the walker’s face bought them all enough time to escape. After the foursome holed up in a treehouse for the night, we got an even greater sense of just how broken Silas is when he couldn’t relax and have fun playing with Hope’s bowling ball, Big Mo, like everyone else. And just when he was already feeling crummy about not being able to save Elton, up moseyed that same bee-filled walker. Everything, in Silas’ mind, was his fault. Following a game of Monopoly and lights-out, Hope snuck out of the tree and, like her sister before her, nearly got killed trying to take out an empty. But she survived, then swore to secrecy Silas — the only person to notice her coming and going. BTW, she added, his mistake didn’t need to follow him around. (Of course, she said this even as she was being haunted by her memories of shooting Elton’s mother.) 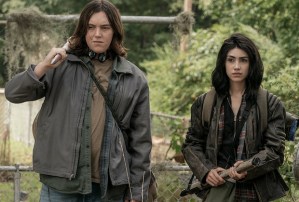 ‘SAY WHAT YOU WILL, BUT THEY HANDLE THEIR S–T’ | Chasing after the kids, Felix and Huck comforted themselves with the thought that, once the youngsters caught sight of the Blaze of Gory, they’d “be glad they still have a home to go back to.” (Ah, if they only knew… ) While traveling once-familiar streets, Felix flashed back to his youth — and his father’s discovery that he was gay. Though it had been Felix who’d been paying the bills, Dad coldly kicked him out. Eventually, he confided in Huck that he’d been at school the night the sky fell, and had run for two days to get home, to be with his folks at the end. Despite it being the apocalypse and all, they wouldn’t so much as open the door. Lord. Meanwhile, as daunting as the B.O.G. turned out to be, Iris insisted that she and her pals could get through it. Camped out overnight before attempting to do so, Hope and Elton did more gloomy bonding, with him explaining that the last of a species were called endlings — and that was what they were. So the message no one seemed to notice her spray-painting like a trail of breadcrumbs for Felix read, “We Were Here — the Endlings.”

When at last the quartet endeavored to make their way through the B.O.G., as well its thick smoke and endless walkers, they lost track of the sun and, therefore, the direction in which they were headed. Somehow, they made it to the other side — still with none of them killing a walker — only to discover that… crap! They were still in the B.O.G. Hot on their trail, Felix deduced from the clues Hope kept leaving that “obviously, one of them doesnt wanna do this.” Where had he snuck off to the night before? Huck wanted to know. “To kill my parents,” he replied. (Apparently, they’d still been housebound, albeit turned, right where he’d left them a decade earlier.) Back in the B.O.G., Elton floated the idea of someone sounding a nearby tornado siren — in effect, becoming bait, allowing everyone else to make it to the airfield on the far side of the area. And, erm, of course, that person would then, um, escape, too. That idea was so crazy, even Iris lost her nerve, prompting Hope to give her a pep talk. As everyone conked out for the night atop a bus, Hope snuck off, presumably to assuage her guilty conscience by sounding the alarm and drawing the masses of empties to her.

So, your thoughts on “The Blaze of Gory”? Felix’s backstory? Drop a comment below.