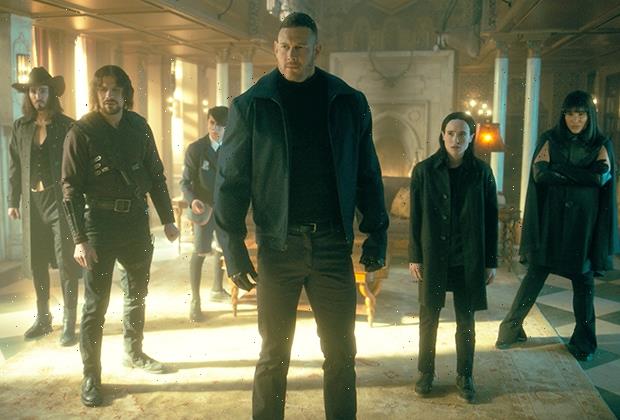 The Hargreeves siblings were more than ready for a fight with their Sparrow Academy counterparts at the top of The Umbrella Academy‘s premiere — but first, they had to cut loose.

Enter Kenny Loggins’ “Footloose,” which served as the soundtrack for a two-and-a-half-minute dance sequence — a scene that we came to learn was taking place entirely in Diego’s head. Sparrow No. 6 (aka Jayme) has the unique ability to make others hallucinate when she hits them with her blue saliva, which sent Diego into a dance-filled daydream after she hocked a loogie right onto his cheek.

“Diego was the recipient of it, and I thought, ‘What would Diego hallucinate? What would possibly go through his brain?’” series creator Steve Blackman tells TVLine of the scene’s genesis. “And he’s a bit of a dancer, that character, so I thought, ‘Maybe he would just go crazy. Footloose! He would go to Footloose!’ It just felt right to me.”

Bringing that idea to fruition, though, was a massive undertaking, made significantly more difficult by the coronavirus pandemic (and because, per Blackman, there wasn’t a single dance double used in the entire number). As Tom Hopper — aka Luther Hargreeves — shares, the process began with dance rehearsals via Zoom, which ultimately gave way to practicing in person.

“COVID was still a thing, so we were all in quarantine. It gradually came together, but they started off with a much slower version of the song and the dance,” Hopper elaborates. “And they originally sent us a clip of professional dancers doing the entire dance, and I think we all had the same fear of, ‘We’re never going to be able to do that.’ But it came together in the end, with some good editing.”

Emmy Raver-Lampman, who plays Allison Hargreeves, has a sunnier outlook on the cast’s collective accomplishment — and not just because the choreography likely came easier to her, having performed in Broadway productions like Hamilton and Hair.

“I was so proud of everyone,” she remarks. “The majority of the actors in this cast have never danced like that, or had to learn a dance like that. Honestly, it was beautiful to watch everyone take this on and hunker down and learn the dance and take all the curveballs that were thrown at them. It was really, really fun and entertaining.”

But in the spirit of his Umbrella Academy character, Robert Sheehan — who plays the cheeky Klaus Hargreeves — sums up the experience a bit differently than his on-screen sister: “Kenny Loggins is responsible for real trauma,” he says.

Umbrella Academy fans, did you get a kick out of the premiere’s “Footloose” moment? Tell us below!