Throughout the first three seasons of USA’s “The Sinner,” detective Harry Ambrose (Bill Pullman) has always had a convenient justification for when things get complicated. If the case gets too personal, if his methods lead him into dangerous territory, or if anyone questions why he’s asking strangers for seemingly random information, he always had the back-pocket excuse that he was… just doing his job.

At the outset of Season 4, there’s no job for him to do. It’s not quite accurate to say that Harry is enjoying his quasi-retirement. He’s still shaken by the events of last season’s cabin showdown, not to mention being buried alive not too long before that. Sensing that he needs a literal change of scenery, his partner Sonya (Jessica Hecht) takes the lead on a retreat of sorts in an island town off the coast of New England.

He quickly meets a handful of locals, including Percy Muldoon (Alice Kremelberg), the young heir apparent to the area’s main family fishing outfit. But this is Harry Ambrose, so it doesn’t take long for strange things to catch up with him, even away from the mainland.

One night, on a walk meant to clear his head in a way his recently forsaken antidepressants no longer can, Harry chances upon Percy in the forest near the ocean. In one quick motion, she disappears and before long, the whole island is wrapped up in a missing persons search.

“The Sinner” showrunner Derek Simonds, who wrote and directed the season premiere, has a knack for taking the detective-mystery formula and adding a few variables. Last season’s main would-be suspect, as played by Matt Bomer, was haunted by his past, but the added heady philosophical layer forced Harry to dig deeper. Before that, the series kicked off with a broad-daylight fatal stabbing, forcing Harry to work with the woman responsible (Jessica Biel) and begin at the end.

If Season 1 revolved around memory and the next two seasons focused more on motive, Season 4 of “The Sinner” is a mix of both. The show has always benefited from giving Harry a strong foil (or at least a strong personality for Harry to have to consider). Here, no one quite fills that Biel/Coon/Bomer void, instead fraying it out amongst a variety of subjects and family members. 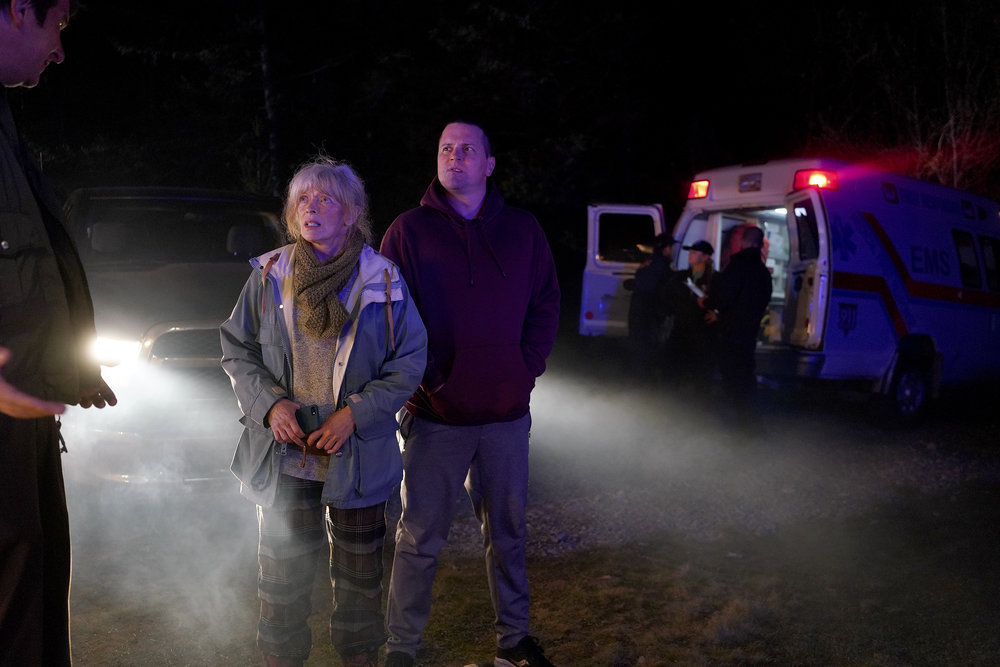 Frances Fisher and Michael Mosley in “The Sinner”

While this show is incapable of delivering a run-of-the-mill detective story, taking away what made the prior chapters in Harry’s career compelling would be tough without putting something distinct in its place. So the longer that Season 4 gets into its opening three episodes, Harry seems to be fighting himself more than ever. In the process, the presence of Sonya, and her added understanding of his psychological drive, forces him to have to justify things he’s taken for granted. It goes beyond rearranging date night plans or bouncing off ideas around the kitchen of their vacation digs. Without a law enforcement superior officer to rebel against, all he’s left with is his own conscience.

In that bigger turn inward, Simonds also finds a solution for getting around his lack of direct access to Percy. When it pops up, it feels like a near-fatal mistake for the entire season. As it progresses, though, “The Sinner” reinforces that this is another case where the usual flow of Harry trying to get in the mind of the investigation subject is being thrown in reverse. In some ways, it’s as much a danger as being trapped in an underground coffin.

As always, Pullman is more than up to the task. Even with the slightly new approach to how Harry processes his own trauma and the way his job is embedded in his self-worth, Pullman has kept this character perfectly calibrated to his surroundings. Harry is a scarred man, something you can see even when he’s confident about a lead or some key connection; he’s stil ever so slightly on his heels. Harry takes pride in his job, yet Pullman knows when to let some unease peek through whenever there’s a particularly hard truth or confrontation.

“The Sinner” has never shied away from the occasional flashback (repeated credit again to last year’s discovery of the actors who played the younger versions of Bomer and Chris Messina’s characters), and Season 4 finds plenty of chances to extend those even further. The audience has a clear window into Harry’s thoughts and memories, but he’s not the only one. In turn, the people most invested in finding Percy’s whereabouts — her grandmother Meg (Frances Fisher), notable among them — each get their own turn to show the viewer what only they know.

Add on a thin veneer of mysticism and you have a missing persons story that isn’t revolutionary, but one that throws off convention by just enough degrees to make it worth checking out. “The Sinner” was never just about the answers. Now, more than ever, the man asking the questions has become the show’s biggest draw.

“The Sinner” Season 4 airs weekly on Wednesdays at 10 p.m. ET on USA Network.