Starring in a Hallmark Christmas movie today isn’t much different than appearing in Mean Girls 18 years ago, says star Jonathan Bennett: just like he did with Lindsay Lohan in 2004, he “meet cutes” an attractive single in a rom-com type setting in The Holiday Sitter.

This time, however, Bennett is making a little history: the movie debuting Dec. 11 at 8. p.m. marks the first time a Hallmark holiday flick revolves around a same-sex couple. In this case, Bennett plays a confirmed bachelor named Sam who agrees to watch his teen nephew and young niece while their parents are away. He ends up falling for Jason (George Krissa), an easy-on-the-eyes neighbor who’s far more adept at caring for kids.

“We’re doing all the classic things that we love in Hallmark movies,” Bennett tells Deadline. “We’re doing the tropes that we’ve come to love and expect from watching Hallmark movies. We’re just turning up the comedy and having two men as the leads instead of the classic straight couple. The audience is going to see two men meet and fall for each other in the exact same way that a man and a woman meet and fall for each other. That’s literally the only difference with The Holiday Sitter. It’s based in love.”

Gay characters have been featured in Hallmark movies before; Bennett, in fact, has played married gay man in The Christmas House and The Christmas House 2 in 2020 and 2021. But those were always what Executive Vice President Lisa Hamilton Daly likes to describe as “B+ stories.” A same-sex couple was never the primary focus — until now.

“We felt that it was time for a story with a gay couple,” says Daly, who in April signed Bennett to an exclusive, multi-picture deal. “We are really trying to make it so that everybody sees themselves when they tune in. We are trying to stay true to the Hallmark brand values, one of which is inclusiveness. It’s a true of Hallmark cards, which has a card for every kind of occasion. In the past, there was a focus on one particular kind of love story, and I think everybody thought, ‘wow, we’re not telling the whole story here.’” 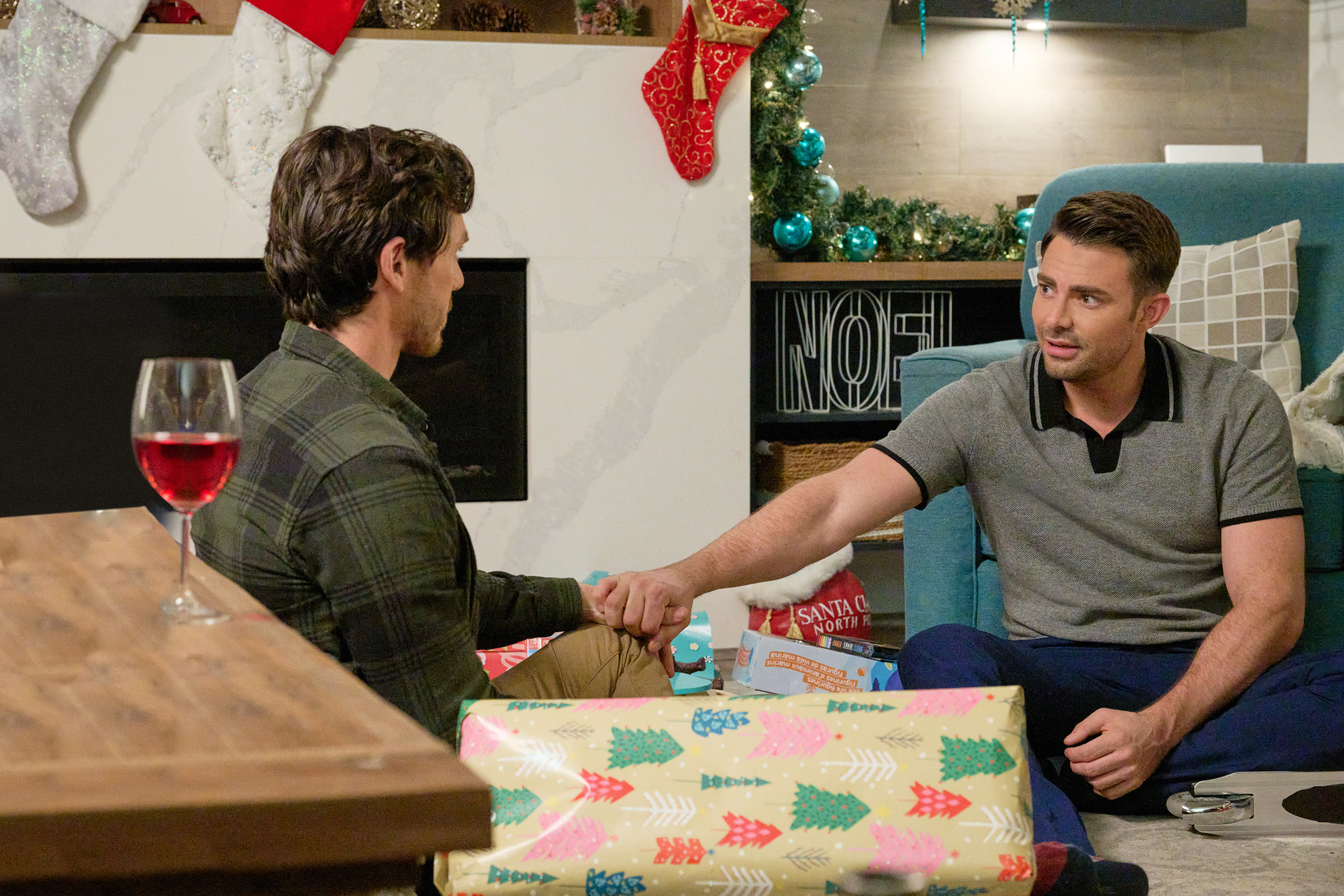 The Holiday Sitter lands at a time when gay rom-coms are having a moment. Besides the release of Bros in September — which is now streaming on Peacock — there’s also Michael Ausiello’s sweet tearjerker Spoiler Alert, which opens today. It also comes after Candace Cameron Bure faced backlash for telling the Wall Street Journal that the Great American Family network will “keep traditional marriage at the core” and not do movies with same sex couples.

“Given the toxic climate in our culture right now, I shouldn’t be surprised,” Bure said in response to the furor. “We need Christmas more than ever.”

Daly is aware that some negative chatter over The Holiday Sitter exists on social media; she expects there will be a contingent of viewers who avoid the movie. But she’s not exactly programming this movie for them. “We’re hoping there are people who will come watch it who may be new viewers,” says Daly. “I see this personally as an appeal to a wider audience.”

“I look at social media a lot and the things that make me really happy is when I read that people feel seen,” she continues. “We just want to make people happy in the holidays. We want you to feel seen and appreciated and valued. The woke stuff? I don’t personally feel like being woke is a criticism. We’re awake to the fact that there are other people in the world who want be acknowledged. That’s how I view it.”

Bennett has his own Christmas wish for the movie: he hopes the same fans who embraced him in Mean Girls will watch him in The Holiday Sitter. He even threw a “fetch” joke into the script.

“When I did Mean Girls, I was a different man and I was at a different time in my life where I was living in the closet. I wasn’t living my true authentic self. I was so afraid of coming out because I was afraid that the fans were going to hate me and they were going to be so upset,” he says. “But when I finally came out, it was the complete opposite that happened. I was embraced and supported and celebrated by all the Mean Girls fans. Now I am in the first LGBTQ-plus led rom-com on the Hallmark Channel where you’re going see me meet cute, just like you saw me and Lindsay meet cute. I thought it was really important to not only have a little closure to that old part of my life, but just to give a nod to the fans who supported me for the past 18 years. I see you and thank you for letting me be in this movie and letting me shine.”

The Holiday Sitter is from Manmaid Productions Inc. in association with Johnson Production Group.  Timothy O. Johnson, Maura Dunbar and Bennett serve as executive producers.  Navid Soofi is producer.  Ali Liebert directed from a script by Greg Baldwin and Tracy Andreen, from a story by Bennett and Baldwin.

Will Russia’s Invasion Of Ukraine Set The Agenda For International Oscar Race?