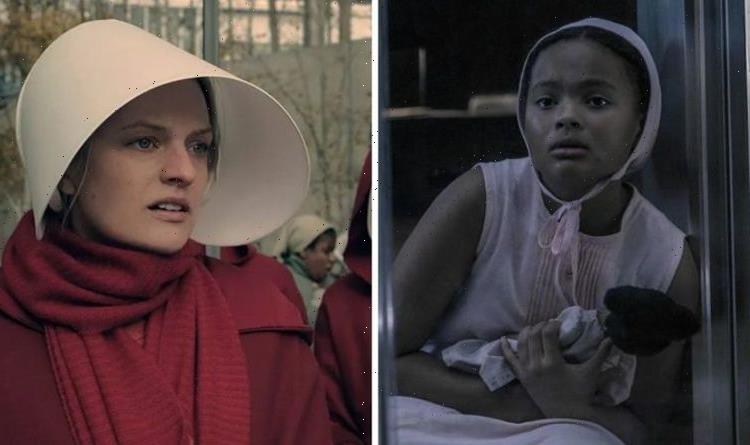 The Handmaid's Tale: June Osborne prepares for trial in teaser

Dystopian series The Handmaid’s Tale, based on the novel by Margaret Atwood, recently aired the latest season on Channel 4, and fans are already eager to find out what awaits June in series five. Protagonist June (played by Elisabeth Moss) has suffered horrifically at the hands of the Gilead regime, and her ultimate aim is to protect her young daughter Hannah Bankole (Jordana Blake) who was snatched from her at the very start of the series as she tried to flee to Canada. Fans have their own theories on what awaits June in the coming episodes, with several believing she may not get a fairytale happy ending after everything she’s endured. But could she perhaps sacrifice her own life while saving Hannah from Gilead?

They wrote: “I think the nature of the beast she’s chosen (and the tone of the show) probably won’t give her a clean-cut happy ending where she rides off into the sunset with her family.”

One viewer responded with a believable plot which would see June’s loose ends all tied up, but would still end with her death.

They commented: “I think she’ll get a dramatic, but bittersweet ending.

“Possibly where she manages to either save Hannah or deal a deathblow to the system of Gilead, but pays with her life.

“It’ll probably be a tear jerker too, like with a dramatic send off where she tells Hannah to be happy, healthy, etc. don’t ever let the b******* grind you down.”

Another fan penned: “I think she’ll die trying to save Hannah. Undecided if Hannah will be returned to Luke.”

This is a plausible theory, because Hannah has been June’s motivation to keep fighting since the series began.

Talking about where season five might go, Elisabeth herself hinted that June’s ultimate goal is to remove Hannah from Gilead.

The 39-year-old star of the dark series remarked: “Her life is about this war.

“And her life is about creating a better future for her daughters. That is her purpose and, let us not forget, she still has a daughter that is in Gilead.”

Speaking to The Hollywood Reporter, the actress continued: “This show is about the first episode with that first scene where her daughter is taken away.

“This show is about a woman creating a better future for the next generation and, specifically, for her own children.”

Episodes have suggested that she was placed far away from June, but she has made a few appearances lately.

“That’s the only thing that I’m thinking about and focusing on in season five right now,” Elisabeth added.

The latest instalments saw a highly-anticipated emotional reunion between the resilient June and the rest of her family, with the exception of Hannah.

Her daughter’s fate remains unknown. One point in season four saw June briefly come face to face with Hannah, who was in a large glass cell, and the youngster no longer recognised June as her mother.

A heartbroken June ended up giving away the location of some of the other handmaids to guards in order to save her daughter.

June will risk everything in order to get Hannah back to her true family, but will she make the ultimate sacrifice?

The Handmaid’s Tale is available to stream on All4 and Hulu.