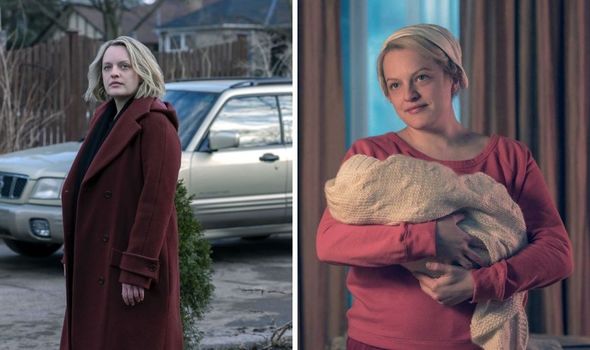 Hulu’s dystopian show saw June Osborne (Elisabeth Moss) get brutal revenge on Fred Waterford (Joseph Fiennes) for the abuse he put her through. The finale scene of The Handmaid’s Tale left fans asking questions about her fate in season five and viewers have come up with an interesting theory using a major clue.

Taking to Reddit to share their theory, the user posted: “When I got to the scene where June is spreading the blood on Nichole I asked why is the show is showing June getting blood on Nichole? What does it mean?”

The user questioned: “Could it also be foreshadowing, as in is Fred’s blood in Nichole?

“June thinks she is rid of Fred at the end of the season finale but his blood is physically on Nicole, if you think that Fred could be the father this is probably the most tangible foreshadowing of that,” they speculated.

In the scene, June had returned home from No Man’s Land, where she and other former Handmaids had beaten Fred to death and was cradling her baby daughter, Nichole, despite being covered in his blood.

While in Gilead, June suffered emotional, physical, and sexual abuse at the hands of Fred Waterford.

As a Commander and establisher of the state, he played a major role in implementing the misogynistic and patriarchal laws that forced June to become a Handmaid.

June was a Handmaid at the Waterford residence and one of her main duties was to take part in the ritualized act of Ceremony.

In an effort to increase the birth rate in Gilead, the Handmaid’s were forced to conceive for the Commander and his wife.

In June’s case, she was being held down by Serena Joy Waterford (Yvonne Strahovski) while Fred raped her.

After a while, Serena noticed that June wasn’t conceiving so she assumed that Fred was also barren.

She enlisted the help of his driver Nick Blaine (Max Minghella) and secretly planned for them to have sex, so June could become pregnant.

Unbeknownst to the Waterfords Nick and June had already been having an illegal fling, which they would’ve been murdered for if caught.

This worked and June later gave birth to baby Nichole, as she was in hiding while on an attempted escape she gave birth on her own until she was caught and taken back to Gilead.

However, this didn’t stop June, with the help of fellow Handmaid Emily Malek (Alexis Bledel) she was able to orchestrate an escape that saw Emily and Nichole make it to freedom in Canada.

Eventually, June also became a free woman in season four, where she was able to reunite with her friends and husband Luke (O.T. Bankole).

In response to the theory, one fan disagreed and shared their own idea: “I think it could be a way for June to show Nichole that she did it for her.

They explained: “Like here is the blood of the man that hurt you also.

“So when she comes home with Fred’s blood she’s showing the sacrifice she’s had to make to be a good mother and getting justice for not only her but her children,” they added.

Thankfully for fans, season five has been confirmed by network bosses which could see its release in spring 2022.

Hopefully, these questions will be answered and the true identity of Nicholes’ father will be revealed.