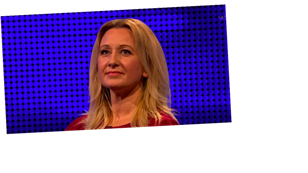 The Chase viewers were left feeling hot under the collar as they tuned in on Monday evening to the ITV show hosted by Bradley Walsh.

Male fans of the show were somewhat distracted by one of the contestants called Jenny.

The 41-year-old mum-of-four was the second player to take on The Chaser Shaun Wallace, but men watching at home were more interested in her looks.

As Jenny explained to Bradley that she works as a tribute act for a living, she revealed that she impersonates singers such as Britney Spears and Lady Gaga.

One person tweeted: "Ow Jenny is looking great for 41, wouldn't be able to tell."

Unfortunately, Jenny wasn't clever enough to beat The Chaser and ended up leaving the game early – and viewers were not happy.

"The lovely Jenny is out and I am not happy," one said, while another added: "Jenny is welcome to chase me if she likes."

Meanwhile, another female contestant on Monday's show appeared to be flirting with Shaun as well as host Bradley.

After Judi answered her first round of questions she proceeded to tell Shaun is is "yummy" and then complimented Bradley too.

But viewers at home found it sickening, with many posting vomit gifs on Twitter.

"Yummy?! Did she just say YUMMY?! #TheChase," one posted, while another added: "A nice yummy thing to say…. ewwwww please stop!! #TheChase."

However, Judi had the last laugh as she ended up being the only contestant who made it to the final on Monday's show.