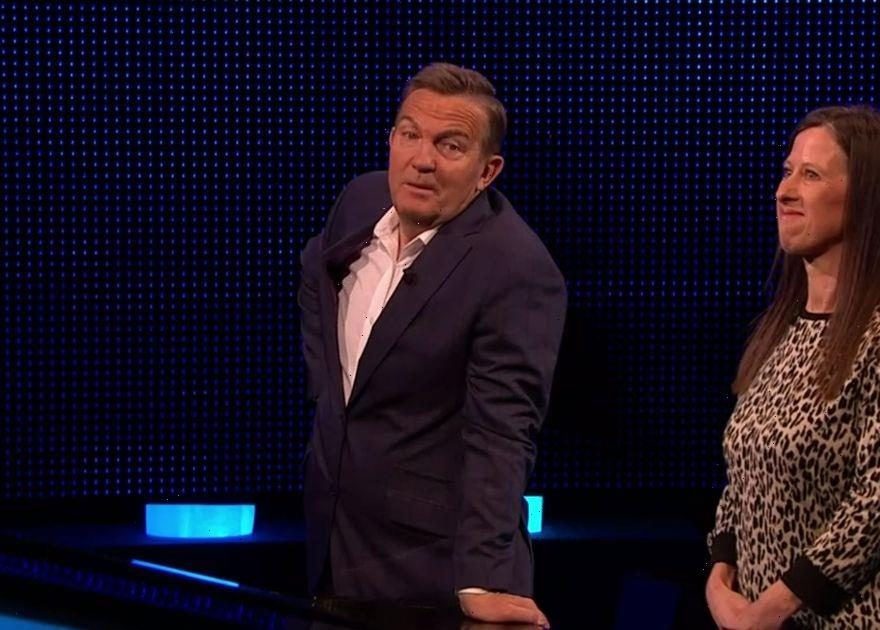 The Chase fans were left surprised as a contestant booed host Bradley Walsh over a crass toilet joke.

The TV presenter welcomed 51-year-old trainee accountant Clare from Essex, to try her luck up against Shaun 'The Dark Destroyer' Wallace during Tuesday's episode.

Earning an impressive £6,000 in her solo cash builder round, Clare opted for the middle offer in her solo face-off with Shaun.

For her first question, she was asked: "In 2019, what functional art installation was stolen from Blenheim Palace?"

The answer to the question was in fact a 'gold toilet', which both Clare and Shaun answered correctly.

Following the question, The Chase host Bradley made a joke in reference to the stolen toilet, adding that "the police had nothing to go on."

After initially laughing at the quip, Clare later booed the 61-year-old presenter.

In response, Bradley gave the nearest camera a side-eyed glance.

Quick to pick up on the awkward exchange were The Chase viewers, the majority of whom agreed that the joke 'wasn't that funny'.

One viewer wrote: "Your joke wasn't that funny, Bradley."

Another commented: "That was a terrible joke, even for you!"

Another said: "Bradley being extra annoying today it seems."

Clare ended up being caught by Shaun in her solo chase and was booted off the show alongside her team mate, Jo.

The surviving two players Mike and Cameron faced off against Shaun in the final chase but fell short of the points they needed to get in order to take home the prize money.

Sadly, they walking away empty-handed.

The Chase airs from 5 pm on weekdays on ITV.