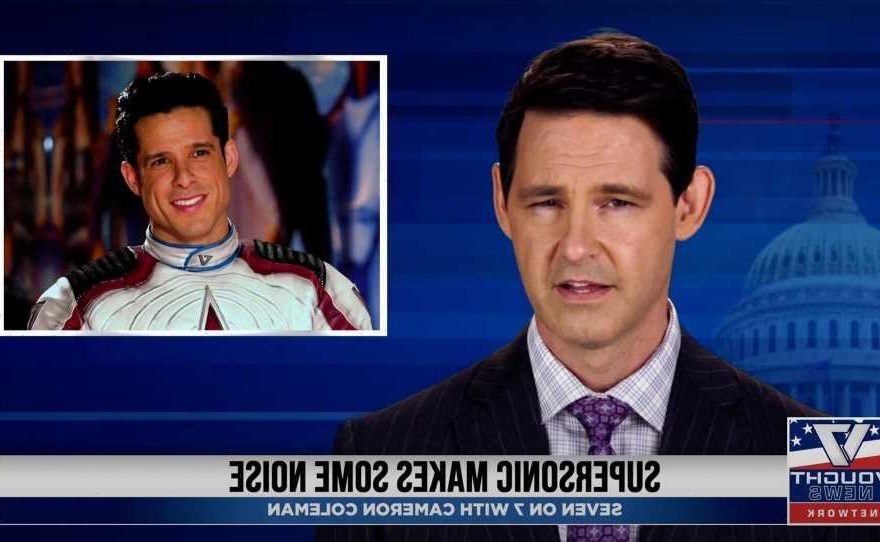 The superhero subgenre has been shaken up by the arrival of The Boys, a pitch-black parody and satire of the current pop culture obsession de jour. The Amazon Prime series, as well as its graphic novel source material written by Garth Ennis, has achieved its popularity by taking an unapologetically political stance in using their messed-up “heroes” to comment on current events. As we wait for new episodes, a new The Boys season 3 teaser has arrived with some more in-universe coverage from the Vought News Network, and some details on a new superhero have been revealed.

As with the initial clip released last month, this blatant parody of Tucker Carlson nonsense on Fox News involves fictional newscaster/shock jock Cameron Coleman keeping the public apprised of the latest reports concerning the Vaught Corporation’s collection of somewhat less-than-super heroes. Titled Seven on 7 and released on the seventh of each month to help fill the time until the release of The Boys season 3, there are several allusions to the contemporary political tension present in much of the world, as well as fun little details further fleshing out the show’s world-building.

The first two stories are centered on Supersonic, a new superhero portrayed by Miles Gaston Villanueva, who’ll be joining the cast this upcoming season. Not only does he apparently have something of a troubled past involving a stint in rehab, but he happens to be the ex-boyfriend of series regular Starlight (Erin Moriarty). This might be worth paying attention to, as it could be a development that adds some tension between the two superheroes, as well as with our protagonist, Hughie Campbell (Jack Quaid).

There are also further updates on The Deep (Chace Crawford) going public with his allegations of “psychological manipulation, corporate corruption, and an unhealthy obsession with Fresca” against the Church of the Collective (the leader of which we watched get blown to bits at the tail-end of season 2). Plus, we get a look at “patriotic” Homelander fans attempting to take a stand against “super-terrorists.” There’s even a brief interlude of Coleman weighing in on the ongoing mental health discussions as they concern real-world athletes and actors as well as a jab at corporatized LGBTQ celebrations.

More information is revealed about Compound V, the superhero serum exposed to the public that proved the sinister Vought Corporation had been manufacturing both heroes and villains. A brief soundbite from Vought CEO Stan Edgar (Giancarlo Esposito) provides corporate-speak damage control and certainly hints that the company will continue to escape facing any actual consequences. Finally, the news sheds more light on Jessie T. Usher’s A-Train, who had been forced to retire from Vought’s supergroup, The Seven, but now is back and training for his next superspeed racing competition.

It’s fun to watch this show fully lean into its satire like this, risking the wrath of certain parts of the population in service of providing storytelling that loses none of its political potency. Superheroes can’t be separated from politics and The Boys continues to show why that’s the case.

No release date for season 3 has been set just yet, but in the meantime we’ll keep you updated on these monthly video teases as well as any The Boys updates as they come in.