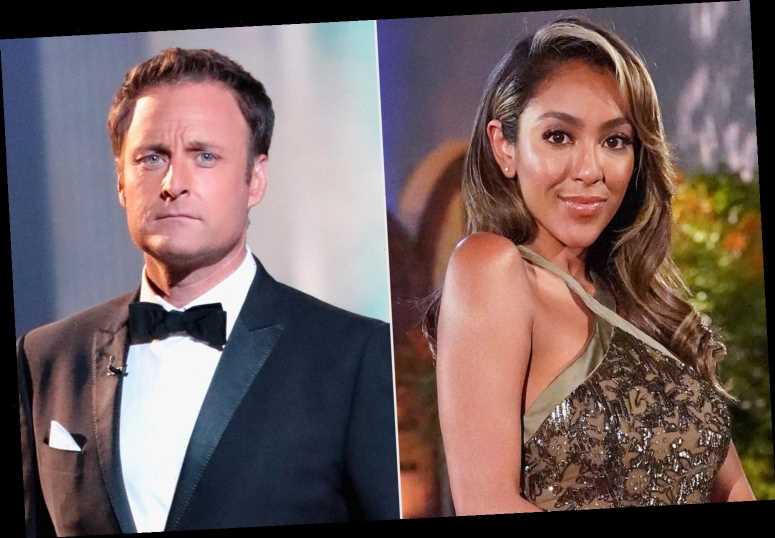 Tayshia Adams is reacting to Chris Harrison's announcement that he will be "stepping aside" from The Bachelor "for a period of time."

During Thursday's episode of Click Bait with Bachelor Nation, Adams, the most recent Bachelorette, said the longtime host's decision is "a really good thing."

Harrison, 49, faced controversy after comments he made about contestant Rachael Kirkconnell's past racist actions during an interview with Rachel Lindsay on Extra last week.

The TV personality said in the interview that Kirkconnell deserved "compassion" after social media posts of hers surfaced — including Kirkconnell dressing up as a Native American person and attending an antebellum plantation-themed ball.

After Lindsay and others in Bachelor Nation called him out, Harrison announced he would step away from the franchise for the time being to "try to evolve and be a better man." Adams, 30, said on Click Bait that Harrison's apology "meant a lot to her," and pointed out some parts of his statement that stood out.

"I think after reading his apology there's a few things that stuck out to me, it hit my heart a little bit more to know he actually meant what he was saying," she said.

"He said, 'By excusing historical racism I defended it' which is the absolute truth, and the fact that he called that out and owned up to that and he acknowledges that, means a lot to me," Adams continued.

"Also the fact that he said, 'This is not just a moment but a commitment to much greater understanding that I will actively make each day' also meant a lot to me, because it isn't just a moment, just like how Blacks Lives Matter isn't just a trending topic on Instagram — it's a thing that's taking place every single day that we should actively try to partake in and better," she said.

Adams added that Harrison stepping back was "absolutely" the right move.

"His words affected a lot of people, you know, myself included," she said. "I think that by him taking ownership, and just not just saying issue an apology and then just going back to work the next day like nothing happened speaks volumes on his behalf."

The reality star also connected her philosophy on second chances to fiancé Zac Clark, who has been open about his past alcohol and drug addiction and now works as an addiction recovery specialist.

"I feel like we have to allow people to prove us wrong, and prove themselves," she said. "And I've learned this even in my relationship. I mean, Zachary used to be an addict and he's done a lot of wrong, in a time that I never even knew of him, and he needed somebody to give him a second chance in order to prove himself." Later in the episode, Adams opened up about how much it meant to her to serve as the second person of color to lead The Bachelorette, following Lindsay.

"If I can be that one person that someone can identify with the show that they've never really been able to identify with before, that means a lot to me, so we're making waves and slowly but surely," said Adams, who identifies as Mexican and Black.

When co-host Joe Amabile asked what it feels like to be able to serve as that person who other people can identity with, she said she cries "a lot" thinking about it.

"I remember being on the show, and I think I've said this before, but I used to get a lot of DMs of people, just even mixed girls in particular, just saying like, 'I haven't seen someone of my race been in a role like you or on TV that I can actually relate to,'" Adams said. "It means a lot to me."